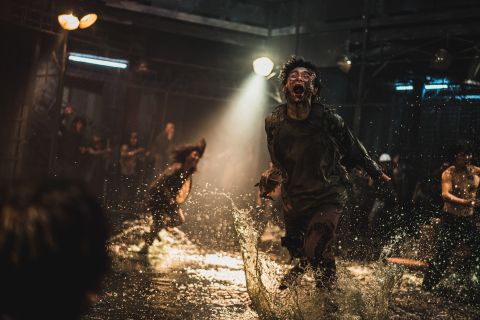 'Peninsula' benefits from an epic scope that loads this zombie flick with blockbuster genre appeal, landing somewhere between 'Land Of The Dead' meets 'World War Z' with a little 'Fast & Furious' zest to kick things a notch higher.

It’s difficult to challenge George A. Romero’s masterful manipulation of zombie cinema when it comes to the festering subgenre’s socially conscious mine-ability (consumerism, classism, racial injustice). In the mainstream, especially, it’s a subset of horror that’s, of late, in need of renovation. Yeon Sang-ho’s South Korean speeding bullet, 2016’s Train To Busan, was the exact reinvigoration that flew past outdated zombie representations. It cleared the way for equally supercharged follow-ups that, honestly, never came. I guess Yeon Sang-ho has to revive this undead space on his own? His continuation, Peninsula (aka Train To Busan Presents: Peninsula), showcases the ambition we should all crave from sequels and is hands-down the best zombie release since its predecessor, Train To Busan.

Yeon Sang-ho and co-writer Park Joo-suk fast-forward their outbreak roughly four years into the future, where Korea has been quarantined. Most cities are now “lost” areas where only the infected roam. Jung-seok (Gang Dong-won) was one of the last to be saved by fleeing overseas, before borders closed indefinitely. But he might return after a compensated offer from a crime lord to retrieve an insane sum of US cash abandoned in Seoul. Get in via boat, locate the eighteen-wheeler, snatch the loot, call for extraction. An easy payday for him and his brother-in-law Cheol-min (Kim Do-yoon), Jung-seok assumes. That’s until rogues still inhabiting the “Peninsula” thwart any getaway plans and gang warfare presents itself as a deadlier threat than zombie herds.

Sorry not sorry for the hyperbole, but Peninsula is Land Of The Dead, Mad Max: Fury Road, World War Z, all mixed in a blender with Fast & Furious franchise DNA (the later sequels). It’s buckwild action-horror mixed with drift-happy chase sequences, gladiatorial zombie gauntlets, and operational heist objectives. The world we’re introduced to when Jung-seok’s crew reaches the Peninsula is a metropolis blanketed in overgrown vegetation, reduced to grungy remains of a once-bustling civilization. Something out of I Am Legend or The Last Of Us. It’s an immediate introduction into a primal reality where humanity has vanished, yet the living still find ways to survive. All these elements, plus regrets from Jung Seok’s past, provide this new playground for Sang-ho Yeon’s further expansion on zombified approaches. Like a child with new toys (zombie avalanches) he can’t wait to show his friends.

It’s with the introduction of Min-jung’s (Lee Jung-hyun) family that Peninsula asserts its attitude and personality. Jung-seok’s squad has been surrounded on a highway by sprinting zombies from all directions, after he’s launched through their truck’s windshield away from his companions. In whips an SUV with written-on decorations and plated armor, and we meet sisters who’ve become normalized to their apocalyptic surroundings. “Get in if you want to live,” quips the driver, Jooni (Lee Re), before her younger sibling, a giggly Yu-jin (Lee Ye-won), uses her pimped-out RC car as a life-saving, neon distraction. These are the inspirations of hope for Jung-seok, as he’s saved from becoming zombie chow or an even worse fate when roving criminals swipe his precious cargo.

Enter Unit 631, modeled after George A. Romero’s inquisitive explorations into how society might react when all systems are broken down by flesh-munching threats. Unit 631 is a militia outlet barricaded within a fortified outpost. An arena tests their captured prisoners against caged zombies as a means of entertainment for the collective’s restless ranks. Deranged thrill-chasers like Sgt. Hwang (Kim Min-jae) embrace the barbarism of hunt-and-gather mentalities now that lawlessness rules. Capt. Seo (Koo Gyo-hwan) leads his men like they’re “War Boys,” depriving them of rations while wielding his command over their safety like it’s something he’s earned. Power corrupts, but violence conquers all. Everything in this subgenre stems from Romero, and Unit 631’s ruthless tactics and added commentary are an essential nod to the “living dead” maestro.

What strikes me about Peninsula is with all these elements - servitude as a means of righteousness, savages fueled by plunderous motivations, warlords disillusioned by power - Yeon Sang-ho is still able to ensure emotional beats matter. A daughter’s cries for her mother, a captain’s abandonment betrayals, a soldier’s desire to atone for his past sins. All arcs are seen through to their payoffs. Peninsula may not be as adrenaline-intense as Train To Busan, but the way it weaves all these narrative doomsday predicaments into a cohesive whole is an achievement of a different value. Damn a movie I labeled as “Fast & Furious meets Land Of The Dead” for making me feel things upon its heart-clutching third act climax.

It’s why we’re able to sympathize with Jung-seok’s survivor's guilt. How Yu-jin’s child-like exuberance brings a smile to our faces as she waves at her mother from car to car, in the middle of a dangerous chase, and exclaims, “We came to pick you up!” These human moments amidst systemic, wide-spread mania that grant more weight to a film that ponders its characters’ surroundings as much as burns rubber. Performances bring these Borderlands-type roles to life (Sgt. Hwang, the barbarian), and allow for vile villains to meet justifiably gruesome fates that are worth cheers and applause. Characters on-screen aren’t just lambs to the undead slaughter. There’s meaning behind all of the chaotic madness.

You’re here for the action, though, and I’m here to confirm it sure-as-hell exists but in shorter bursts. Train To Busan squishes a whole lot of zombie carnage into a tubular steel prison. Peninsula opens up the world to farther locales than Busan or Seoul. There’s as much time spent stealthily avoiding zombie congregations that are blinder at night than engaging with the teeth-gnashing threats when Unit 631 fires illuminating flares towards Jung-seok fleeing heroes. Zombie "moths" drawn to spotlight flames.

A melting pot of hand-to-hand military combat mixes with zombie standoffs, all artfully choreographed though Korean inspired action cinema that’s far more fluid than brutish. You can also expect John Wick notes in the film’s latter-half highway set-piece when Sgt. Hwang mobilizes Unit 631’s collection of souped-up tow trucks, minivans, and cop cars to speed after Jung-seok as he drives towards the original meet-up docking zone. Little things like Jooni whipping the butt of her vehicle into a zombie that lunges directly for Jung-seok, issuing a metallic hip-check that sends the monster flying. Or the way Sgt. Hwang’s road warriors cackle with demented glee with death an almost certainty (Fury Road), lavishing the morbid ecstasy.

In a sequel, the best thing you can do is evolve whatever experience you’ve delivered once already. Peninsula is a phenomenal next chapter in the Train To Busan saga for reasons that are new to the franchise. Breathless zombie action doesn’t define the majority of screentime so much as it highlights these furiously fun and often extreme interludes of speedster excitement between pleas for human compassion. The way characters meet, affect each other’s lives, then reunite in the future all channel into the overall zombification storyline of society’s ugliest side revealing itself once said “society” is forgotten. A world that moves on, still enjoying all its technologies and advantages, while Yeon Sang-ho’s South Korea becomes a pandemic dystopia. One without any care from those on the outside who could look in, but would rather comment from afar. Or worse, exploit immeasurable tragedy for personal profit.