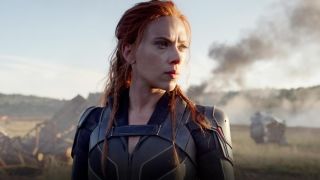 It’s a truth universally acknowledged that every feminist feels like they’re doing it wrong at least some of the time. Committing yourself to the ethos of feminism in 2020 can often be a difficult journey, one full of public judgment, wrong-footed earnestness, and plenty of bad faith whataboutism. In the world of pop culture, it’s proven to be a particularly treacherous path, as any woman who’s had an opinion about Star Wars on the internet can testify. For a depressingly loud contingency of online discourse, the mere act of talking about gender representation is something to outright reject or declare a “danger” to men. And this barely scratches the surface on the harassment, abuse, and threats received by public feminists for daring to engage with film, video games, television, etc, in a vaguely critical manner along these lines. Suffice to say, there is still a lot of hard work to do.

Over the past few years, we’ve seen some important strides in gender parity on the big screen, which remains an important cause given how pop culture at large shapes our world and our understanding of ourselves. After many years of the industry sneering that “women movies don’t make money” or that men don’t care about our stories, especially on a blockbuster scale, we saw a handful of major titles disprove those archaic assumptions in a mighty fashion. The current cinematic market is tilted in favor of mega-budgeted franchise fare rooted in familiar intellectual properties, and it took way too long for this assembly line of releases to allow for a woman-headlined picture. Even in the 2010s, there seemed to be real concerns that nobody would care about characters as iconic as Wonder Woman or Carol Danvers. Of course, the box office receipts proved them wrong.

Something that has troubled me since this new trend started – one that has clearly been good for a lot of people and is at least refreshing in terms of what we see on screen – is how a multi-billion dollar industry built on systemic misogyny and the marginalization of women, when they finally decided to acknowledge our existence, spun it as a radical political act. It was girl power! Mega-empowerment! Queen feminists to the rescue! Eventually, this attitude spilled over into fandom, encouraged by overwhelming marketing and an eagerness to combat a sexist opposition. Now, it’s depressingly common to go on social media and be lectured by people that not being excited for, say, Black Widow or Wonder Woman 1984 is an inherently misogynistic stance. You don’t care about this woman-fronted movie? Clearly, you’re a bad feminist.

The sad thing is that I get where this attitude comes from. If you’ve spent years, even decades, begging for table scraps, for slivers of representation from an industry too cowardly or bigoted to offer it, you get extremely protective of the crumbs you’re offered. For those of us who grew up on kids’ shows featuring a slew of boys and one token girl, the pressure to have that character be everything to every young woman is palpable. When there are thousands of pieces of pop culture across multiple platforms clamoring for our attention, you want to use your time and money wisely, and so often, it feels like the most worthwhile thing to do is throw all your adoration behind one of the few films with a woman superhero at the forefront. After all, there are dozens of such films with white dudes in the lead and so few by comparison for women (who tend to also be exclusively white.) This is the only one you get so you’d better treasure it.

It doesn’t help that so much of the coverage of these films emphasizes their importance to women and pressurizes us to get behind the cause with our cash. If a film featuring a muscled white dude doesn’t do well, you don’t see a plethora of think-pieces wondering if this is the end of all movies for muscled white dudes. Nobody ever assumes that its box office slump is the result of audiences being sick of men, or that their presence in a film was somehow “too political.” The same lack of logic applies to women directors, who are seldom offered the opportunity to direct major budget titles and are fearful of being put in “movie jail” if the profits aren’t spectacular enough. What this panic does is reinforce a crooked notion that throwing your money behind multi-billion-dollar studios who have ignored you for decades is not only radical but necessary.

A perfect example of this melting pot of contradictions and catch-22s came in the form of the 2016 gender-swapped reboot of Ghostbusters. The film itself is rather sweet and funny and a solid three-star effort that, under fairer circumstances, would have simply been seen for what it was. Instead, it became an overloaded symbol and hate target driven by a terrifying right-wing mob who positioned this perfectly innocent film as part of an evil radical feminist agenda. It was “ruining their childhood”, they said. How dare they replace men with women. In their minds, it represented all their social ills and, helped along by some opportunistic talking-heads, became an easy target for them to push a darker agenda.

The actors from the movie were targeted, most notably Leslie Jones, and any woman who had anything vaguely nice to say about the film faced the wrath of countless misogynists. So, a lot of people felt the need to invest far more in the film than it really needed or could withstand, simply because the issues became far larger than one mere movie with CGI ghosts. You had to stand up for Ghostbusters because it was under such immense pressure forced upon it to “prove” the worth of women full stop. It didn’t get to just be a movie. You can’t really talk fairly about such stuff when you’re painfully aware that your mildest of criticisms will be hijacked by abusive hate groups for their own sinister aims.

This is a problem we see with a lot of these women-fronted blockbusters. Captain Marvel faced a barrage of anger from misogynists because its star Brie Larson dared to be openly feminist. If Captain Marvel failed, these strangers insisted, then that meant that women failed, that Brie Larson failed, and that feminism was poison. It’s blatantly ridiculous but an easy notion to get caught up in. So we end up turning such films into standard-bearers for a social movement that has more urgent matters on its plate than whether a corporate entity can make a billion dollars.

Of course, said corporate powers aren’t exactly on the side-lines with these quandaries. These films are often explicitly sold in activism-adjacent ways, focusing heavily on their status as empowering tales for liberated women. Captain Marvel leaned heavily into this, teaming up with the U.S. Air Force for promotional duties. One ad highlighted female pilots like Carol Danvers, the heroine of the movie, then declared, "Every superhero has an origin story. We all got our start somewhere. For us, it was the U.S. Air Force." A striking piece of iconography? Sure, but it certainly raises a few eyebrows to see a movie wielded as a feminist tool on behalf of the military-industrial complex, especially given the U.S. Air Force's notoriously bleak record on sexual assault of female recruits.

Hollywood has long partnered with the Department of Defense to get access to military equipment, branding, and locations, which typically involves giving the DoD script approval. It's hard to celebrate the badass feminist rhetoric of Captain Marvel when you know how it got funded and the ways that image is being used. Amazon’s The Boys parodies this attitude with scathing precision in season two with its “Girls Get It Done” pseudo-feminist campaign that’s mostly a pink-washed shield for systemic abuse and manipulations. For Captain Marvel, however, it also worked. According to Military.com, after the Air Force placed pre-show Captain Marvel ads in over 3,600 theaters nationwide, their Academy saw their most female applicants in five years.

No studio, marketing campaign, or fandom should position a mere film as a beacon of activism or radical political hope, especially when said movie is operating within the smothering confines of Hollywood. It’s exhausting and frankly unearned for these corporate behemoths to deny equal gender representation for decades, sprinkle a few crumbles across the table, then sell it as an earth-shattering step forward for womanhood. What pop culture needs is inclusivity across the board, crossing the intersections of race, gender, sexuality, class, and so on. It can’t just be one heroine in one or two movies a year: It must be equality behind and in front of the camera, equal pay, a variety of voices at the table, and a true willingness to evolve from the mistakes of the past. One badass woman superhero cannot and should not have to carry the crushing burden of 50% of the population and decades of feminist labor. Frankly, we’ll know we’ve reached true equality when movies like this just get to be movies.