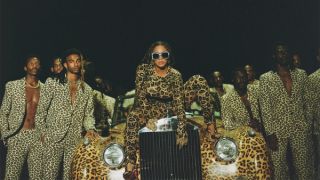 Her 2016 follow-up album, Lemonade, evolved the audio/visual aspect while serving as a complete brand shift. Nearly a year after launching Tidal alongside her husband Sean “Jay Z” Carter and other high profile recording artists, the album and accompanying movie became exclusive to the streaming platform when it initially launched. At the same time, HBO gained exclusive broadcasting rights while making the network free during its weekend release.

Lemonade also served as a turning point in Beyonce’s public persona. The pop star perfect shrouded in apolitical girl power messages transitioned into Black womanism. Released the day before her controversial Black Panther Party-inspired halftime show, lead single “Formation” featured references to police brutality, Louisiana Creole culture and general black pride. By the time Beyoncé partnered with Netflix to release Homecoming in 2019, the concert doc based on her 2018 Coachella performance inspired by HBCU band culture, she had solidified herself as something more than the world’s biggest entertainer.

Beyoncé’s current world-stopping trick traces back to her starring role in Disney’s photo-realistic computer generated Lion King remake last year. Besides portraying an adult Nala opposite Donald Glover’s Simba in the highest grossing animated film of all time, she released a companion album titled The Lion King: The Gift. Coming a year after Kendrick Lamar released a similar full-length tie-in project inspired by Ryan Coogler’s Black Panther film, The Gift grew Beyoncé’s ideas of black empowerment to the motherland itself. This included collaborating with various producers and artists from various African countries alongside more mainstream American artists. For the visual companion piece released alongside a deluxe version of The Gift, the leader of the BeyHive links up with Disney+ for Black Is King.

Similar to Lemonade, Black Is King offers loose narrative beats revolving around various music selections from The Gift. Tying the musical pieces together are poetry excerpts by famed Somali poet Warsan Shire. For the 85 minute runtime, Beyoncé bridges the gap between mainstream American Black culture and the Africa Diaspora in ways not seen in pop culture. Sure, the music is there. This is Beyoncé we’re discussing. However, the visuals are simply jaw dropping despite unfortunately not being available to view in HDR or 4K. There’s just something so visually arresting about the various locations that range from South Africa, West Africa and Belgium to New York, Los Angeles and London. It helps that the many dance numbers on display manage to top the heavens high choreography that was on display on Homecoming.

Black Is King is also a flex in “black excellence” by-way-of meaningful cameos from some of the most important women in contemporary Black and African pop culture . This includes Lupita Nyong’o, Naomi Campbell, Adut Akec, Kelly Rowland, Nandi Madida and Bey’s mother Tina Knowles-Lawson amongst others. A step up from Lemonade, the film also features appearances from artists who worked on the project as well. The best example of that comes during the high-energy “My Power” segment featuring Nija, Busiswa, Yemi Alade, Tierra Whack, Moonchild Sanelly and DJ Lag. Even Pharrell shows up on the Salatiel featured “Water” portion.

As a writer, director, executive producer, recording artist and star, Beyoncé finds new unprecedented ways to blend commerce, art and activism through Black Is King. The Disney+ exclusive is filled with incredible music and gorgeous visuals that fulfills her mission of creating a love letter to Africa.