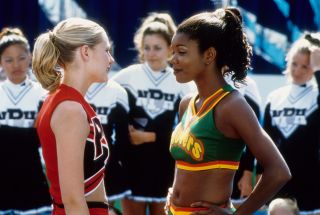 A little over thirty-minutes into Bring It On, high school cheerleading team captain Torrance Shipman (Kirsten Dunst) discovers some devastating news from recent recruit Missy Pantone (Eliza Dushku). Driving an hour out to Los Angeles, Missy takes her to East Compton High where Torrance realizes that previous Rancho Carne High School cheer captain Big Red (Lindsay Sloane) stole and flat-out colonized routines. Before heading back to their more affluent San Diego neighborhood, they’re interrupted by East Compton High cheerleaders including captain Isis (Gabrielle Union). “Brrr, it’s cold in here, I said it must be some Toros in the atmosphere,” Isis questions with controlled anger. “I know you don’t think a white girl made that shit up.”

As parodied in Not Another Teen Movie, many late 90s/early 2000s teen comedies took a representative approach to race by usually sticking to non-harmful token black characters. Peyton Reed’s pre-Ant Man directorial debut Bring It On dared its young audience to think about white privilege, high school funding and cultural appropriation in a way that felt fairly radical when released in the summer of 2000.

During the same scene, Isis says “We’ve had the best squad around for years but no one’s been able to see what we can do.” Though both schools are fictional, it’s implied that the East Compton Clovers couldn’t afford to attend regional and national competitions due to a lack of resources. This made them vulnerable to having their cheer routines whitewashed. Considering reports that students attending public schools in urban districts receive $2,100 less than those attending suburban-based schools, the moment felt real in Bring It On.

Ironically, the white-washing of Black cheer routines is something that is still common today.

Taking things a step further, the film also cleverly avoided white-savor tropes. The Clovers have a great showing during the first UNC regionals. Meanwhile, reigning champions the Rancho Carne have a horrible showing once it’s discovered that their hired choreographer taught the same routine to several other teams. As they are given a chance to compete at the Daytona, Florida nationals due to technicality, the Clovers are left figuring out a way to afford the trip.

Torrance’s need to prove herself capable of being a leader who can take on the best also wants to be an ally in order to right the wrong done by Big Red. After getting a check from her father’s job, she offers it to Isis who promptly rips it up. “You want to make it right,” she asks. “Then when you go to nationals, bring it.” Instead, Isis finds the funds by writing a letter to Oprah inspired television talk show host Pauletta (Aloma Wright) who surprises the team on live television.

In an interview with DVD Talk, Reed mentioned speaking with Union in order to make the character more nuanced outside of mainstream cinema’s usual portrayal of high schools in inner cities. “I didn't want to make a movie that was preachy about race relations- that's the last thing I want to do,” said Reed during the interview. We sat down and looked at that character and said that we want to make this character really watchable, but we don't want it to become knowingly militant.”

By the film’s end, the Clovers win nations leaving the Toros in second place. And they’re fine with it because their placement was earned honestly.

The core of Bring It On’s carefree plot revolves around Torrance’s need to demonstrate her abilities as a leader while dealing with messy peers, unfaithful college boyfriend and possible love interest played by Jesse Bradford. It’s all done in this self-aware parody of cheerleading culture that also took the level of competition and gymnast choreography seriously enough for the cast to attend a four-week cheer camp before filming.

Below the surface, Bring It On anchored its sappy high spirits with frank commentary on racial issues that sadly still occur today. As someone who dabbled in cheerleading during elementary and stopped due to bullying, even the commentary on homophobia found itself equally hilarious and honest. Balancing the lightheartedness of a teen comedy with honest social commentary, it’s not difficult to understand why Bring It On inspired a handful of straight-to-video sequels and even a musical.