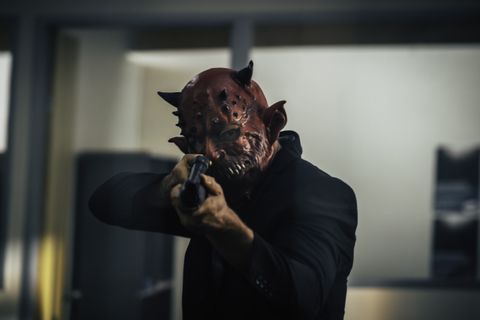 'Bloody Hell' packs a wicked punch in the right moments, but can feel detrimentally indebted to a script that wildly steamrolls into scenes without much introducing or buildup.

Let's get one thing straight: you're watching Bloody Hell for the chaos. It's structured and stylized like you're flipping through a comic book, with this pulpy, violence-first narrative about the morality of heroism. Director Alister Grierson jumps between shootout flashbacks, courtroom evidence footage, and real-time Finnish torture pornography with a single victim as the central pinpoint. It's one man's psychosis (materialized PTSD and trauma that's never fully addressed) against a gaggle of pastel-suspendered psychos, off-the-wall, and without restraint. At times, maybe, to a detriment? But with an overly charismatic lead performance, you can get away with pretty much anything—even slapstick-insane tourist murders.

Rex (Ben O'Toole) just spent the last eight years in prison after a judge ruled his actions that thwarted an ongoing bank robbery were the cause of a single preventable death. Upon release from Sawtooth County Jail, Rex finds himself a newfound Boise celebrity. Some label him a modern-day saint, others a "psycho twat." In any case, Rex isn't fond of the attention, so he books a flight to Finland in search of tranquility. Instead, he finds a taxi driver who gases him, only to awake in some Helsinki dungeon with an amputated leg from the shin-down. No warning, no explanation, only his manifested anger issues in the vision of a leather-jacketed clone as an ally.

The mania in Bloody Hell (a clever play on "Helsinki" in the title, by the way) derives from Ben O'Toole's dueling performance. In the bank, he's a greaser Clint Eastwood type who handily eliminates one criminal, headshots the next, shotgun blasts another, and releases every hostage but one amidst a climactic standoff with the devil-masked ringleader. As a crippled captive hanging like slaughterhouse meat in some deranged family's dismemberment chamber, he's a more docile and level-headed Rex, until Badass Rexy struts into frame. O'Toole berates, empowers, and screams at himself as Rex's subconscious doppelgänger, highlighting the repression of emotions within a conflicted character attempting to flee from his past. Perhaps on-the-nose, but O'Toole proves he can command an audience with nothing on-screen but himself, his abs (while dangling and wounded), and a child's nose to break.

Grierson's tone aims for madcap, but I can see the rapid pace in which O'Toole goes from savior to convict to celebrity to a prisoner as jarring or breakneck. Smashcuts and coincidental plotting by screenwriter Robert Benjamin insist viewers must live in Rex's unbelievable moment, honed on his punishment above all else. Rex chooses Finland as his escape by spitting paper wads at a map while still in his jail cell, and this "Spitball of Fate" plot device represents the thought process of most twists or diversions. It's random, bounce-about, and the final act feels slightly compressed compared to Rex's endured mutilation until revenge is served. It's all over so quickly, so effortlessly, which chops Bloody Hell at the legs...er, well, Rex's other leg.

Enter the film's villainous European bloodline, who lure dimwitted vacationers inside with hospitality then hack their bodies to pieces. Alia (Meg Fraser) immediately asserts herself as the black sheep, who'd rather pursue a career in medicine than practice her family's murderous habits. You see, mother (Caroline Craig) and father (Matthew Sunderland) are just caring for one of their own, serving outsiders as lunch and dinner because that's what's demanded in-house. I won't get into much more, but it's the traditional horror narrative of monstrous secrets causing parents to explore vile means when sustaining heritage, safety, and seclusion. We've beheld these lunatics before, watched someone like Alia foil their absurd normalcy when falling for their latest captor (Rex and Alia connect instantly), then regale the ensuing bloodshed as comeuppance prevails. Par for the limb-strewn course, not much more nor less.

That's the largest takeaway from Bloody Hell. A film so maddened and incensed, projected through Ben O'Toole's frantic displays of survival, and yet, scenes like Rex's maverick Idaho vigilantism or the climactic table-turning are missing an added level of energetic calamity. The atmosphere flattens in parts when action should amplify, with O'Toole's star power shouldering immense weight. Worse off, some gags (Rex reuniting, hug-twirling, with his severed stump in some grassy daydream) land flatter. It's the difference between a serviceable questioning of consequences and responsibility for one's actions coated in gore, and an exquisitely delusional dive into the enraged. Alister Grierson delivers more of the former, but enough to please audiences in the mood for some freaky Helsinki midnighter entertainment.

Bloody Hell is a part of our Nightstream coverage.