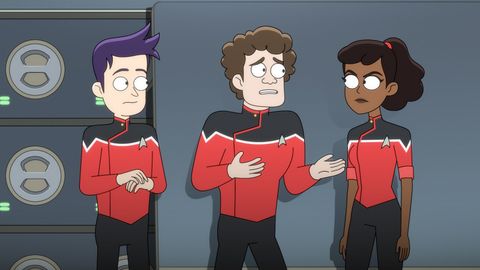 If last week’s episode of Star Trek: Lower Decks was a bit of a dud, this week saw the show get back on track in ways that actually address many of the issues I had with “Cupid’s Errant Arrow.” Not only do Rutherford (Eugene Cordero) and Tendi (Noël Wells) have a plotline that is more fun and memorable than Boimler (Jack Quaid) and Mariner’s (Tawny Newsome), but “Terminal Provocations” introduced a ridiculous new side character, and it found space for Boimler and Mariner to demonstrate a less antagonistic bond as they confront a foe that they agree is more annoying.

That foe is Ensign Fletcher (Tim Robinson), an old buddy of Boimler’s from the academy that at first seems like a pretty cool guy. After all, he diffuses an antagonistic lunchtime confrontation between Mariner and Doctor T’Ana (Gillian Vigman) and offers to cover for Boimler and Mariner to attend a pop concert being held during their shift. However, things go south fast when they find Fletcher knocked out at his post with a power core missing, all while the captain and officers continue to wage an argument with another alien vessel that's becoming increasingly hostile.

After an accusatory confrontation with Delta Shift – basically the ship’s night shifters who look suspiciously similar to their daytime counterparts – they discover that Fletcher had hidden the broken power core in his bunk, like an idiot, and was desperate to find a scapegoat so he wouldn’t get in trouble. The contrived reason for breaking the core? He plugged his brain into it in order to upgrade his brain, Flowers for Algernon style, only for that not to work, because why the hell would it? It’s a bit of a strange shift in the episode to realize that Fletcher is a bit of a moron, but Boimler and Mariner become much more disillusioned by his overwhelming self-interest than his idiocy. As the power core gains sentience after imprinting Fletcher’s desire to be smarter, latching every piece of technology it can to itself, Boimler and Mariner shed the excess weight to their group dynamic and dispose of the threat themselves. It makes for a nice character moment that shows how Boimler has become less rigid and Mariner less full of herself, uniting in a shared passion for keeping the crew safe.

The comedic heft of the episode resides on the holodeck, though, as Rutherford attempts to teach Tendi how to spacewalk. Rutherford introduces Badgey, a holodeck program of his own design that looks like a friendly cartoon Starfleet badge, to teach Tendi a lesson, only for the ship’s power to go offline in the escalating starship battle, disabling the safety protocols on the holodeck. Badgey, in turn, goes berserk, turning against Rutherford and Tendi in a deliciously violent manner, spouting odes about ripping off limbs and tearing away flesh that directly contrast his cute, bouncy proportions.

Badgey is an absolute show-stealer, and even though Rutherford and Tendi are once again stuck in a plot that doesn’t advance the narrative of the overall episode, we do get some further confirmation of Rutherford’s feelings for Tendi as he stands in her defense against what is effectively his own blood-lusting son. It’s a character moment that speaks to Rutherford’s integrity, delivered against this show’s answer to Rick and Morty’s Mr. Meeseeks, and moments like this are what show the potential of a Star Trek animated comedy.

The episode’s plotlines dispose of their villains in ways appropriate to their future comic potential. Fletcher is promoted off-ship (and subsequently fired) after Mariner gives him all the credit for the sentient power core getting loose on the enemy ship and accidentally saving the day. Badgey, meanwhile, assumes a friendly persona once again with the restoration of safety protocols, only for the doors of the holodeck to close on his disgruntled visage. We don’t need to see Fletcher again, because at the end of the day he’s nothing but a foil to Boimler and Mariner’s growing friendship. But Badgey has the potential to come back more ludicrous than ever, and I look forward to the day he returns.