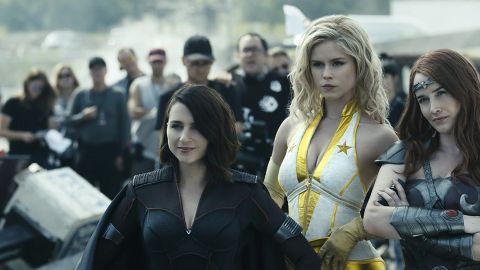 Between Homelander and Stormfront, 'The Boys' boasts two of our generation's most powerfully frightening on-screen villains as a representation of an agenda-first America.

“Don’t be a pussy, laser my fucking tits.”

Let’s start with Butcher, who appears on Aunt Judy’s (Barbara Gordon - no not that one) suburban doorstep unannounced. He’s lost, no Becca (Shantel VanSanten) to show for his efforts, and desperately needs a heart-to-heart stroll with his faithful bulldog, Terror (yes, comic fans, Terror appearance). Unluckily, Black Noir (Nathan Mitchell) tracks Butcher and spies from afar, plotting his assassination. Good thing Hughie and Mother’s Milk, after some quick telephone detective work, roll in ready to support their fearless leader, but more importantly, their friend. Butcher always stresses his lone wolf attitude, still pissin’ on Hughie’s optimism by belittling his comradery as a weakness. Still, it’s all for naught when they band together and MacGyver some Home Alone proximity bombs that initiate a Black Noir standoff.

Before the explosions, we learn about Butcher’s deceased brother Lenny, who Judy compares to Hughie. Lenny was Butcher’s better half, kept him from spiraling out of control, which is an obligation Judy essentially bestows unto Hughie. After Butcher bargains with Stan Edgar (Giancarlo Esposito), who’s surveilling the scene via a camera installed in Black Noir’s suit (Butcher will expose Homelander as a rapist by releasing the photos of Ryan if not freed), Butcher smiles at Hughie, who confronts danger even when told not to, driving home the Lenny/Hughie comparison. Butcher’s heart shows, and his bond with Hughie strengthens, but that doesn’t mean his language has cleaned the bevy of “c-word” drops from his vocabulary (truly masterful the way his pronunciations carry a different meaning every time).

Speaking of Homelander (Antony Starr), Vought’s all-American locomotive is dangerously close to completely derailing. Video footage leaks of his unsanctioned pop-in to slay a third-world terrorist, which catches a hapless egomaniac massacre an innocent child without notice. Protestors take to Vought Industries, led by congresswoman Victoria Neuman (Claudia Doumit), an evident Alexandria Ocasio-Cortez clone. As the official announces Vought Industries and superheroes will face judicial accountability hearings, Homelander drops in to “smooth things over” by stumbling over excuses like “these things happen all the time.” His critics only grow louder, no longer wanting to hear about “patriotism,” especially the uniformed soldier in the front row flipping his middle finger - who Homelander fantasizes eviscerating, and the entire crowd, using his eye blasters.

This time, it was all in Homelander’s head. Next time? Well, that brings me to Stormfront’s further despicableness and internet brainwashing campaign.

While Vought’s production crew is busy with their #GirlsGetItDone washover on Dawn Of The Seven, rewritten by “Joss” (lol), co-starring Greg Grunberg as the film’s “Agent Coulson,” Stormfront’s megalomania spreads. First, she threatens Starlight by cozying up to her mother, who drops in for a quick apology over injecting her child with Compound V by choice. Then Stormfront outright accuses Starlight of being the MSNBC snitch who screwed over Vought, which will only cause further blackmail since Homelander would burn a hole through Starlight's skull should the information float his way. And oh, speaking of Homelander? Stormfront laughs off his publicity nightmare by proving how a few moronic memes generated by keyboard ninjas paid in Arby’s gift cards can take over the world when they start appearing on your Uncle’s Facebook status.

It’s at the point where Stormfront’s arc hurts to watch, as she makes a mockery of the American government and national pride by willingly manipulating a broken system. Why? Because it’s a mirror reflection that laughs while sacrificing the underprivileged and marketing supremacy by fearmongering through tweetable text on stupid images. Aya Cash’s performance is so marvelously hypnotizing because she’s in control, as Stormfront, the whole time. Even Homelander breaks down, as displayed this episode, but Stormfront always has biting snark on deck or a dumbfounded glance like you’re wasting her time. The kind of history-erasing monster who’d demand things like “patriotic education” be taught in history classes, calling their initiative the “1776 commission.” Crazy, right?

Oh, just as a note, Kimiko (Karen Fukuhara) is now ripping dudes’ faces clean off Martyrs style in front of their mobster friends as an assassin for the Albanian mafia. Frenchie (Tomer Capon) tails her, attempts to talk sense, but gets frustrated when he can’t communicate. More on that to come later, I’m sure.

Queen Maeve is the other big story here, still enduring Homelander’s weaponization of her bi-sexuality. Ashley (Colby Minifie) sits Maeve and Elena (Nicola Correia-Damude) down to run through their joint rebranding, headed by two male marketing writers, converting her storyline to #BraveMaeve. Elena now has to wear tailored, more masculine attire because polling shows consumers are “more accepting of gays when they’re in a clear cut gender role.” Maeve’s new artwork comes with a Pride flag, and she's touted as a lesbian because it's an "easier sell" than bisexual. Maeve’s only tolerating the belittling of her lifestyle out of fear of what Homelander would do to Elena, but make no mistake, she’s ready to take the “m-er-eff-er” down. So ready, in fact, she’s willing to haggle with The Deep (Chace Crawford) after his fake-as-hell stunt wedding, all the embarrassing Church Of The Collective PSAs, and every other numbing attempt to erase years of womanizing throughout his toxic history.

Thus brings us to the final scene of “We Gotta Go Now,” where Homelander enters Stormfront’s quarters to thank her for not only smoothing over his failed damage control but gaining him five points in popularity. He’s now “patriotic” and “unwavering” thanks to the influence of online trolls. There’s a sparkle in Homelander’s eye, and a smirk on Stormfront’s (who we now know to be Liberty) face as The Seven’s mightiest hero asks how he could thank his newfound savior. You guessed it, an intense intercourse montage. Homelander and Liberty, two heroes who’ve committed domestic atrocities while wearing our country’s colors, engaging in the roughest superhero sex imaginable (broken bookshelves, scorching regenerative skin, across-the-room tosses) as a victorious showing of fornication in the name of duping the citizens they’re sworn to protect.

The Boys favors zero chill, but the harder these relevant moments of mastermind whitewashing or conspiracies fueled by positions of domination hit, the angrier I get about our reality. Entertainment can be commentative, and escapism can still challenge your worldview. If you can’t handle that right now, I understand, but what’s being said out loud by this raunchy, violent, pull-no-punches episodic satire is some of the most crucial television on the air.