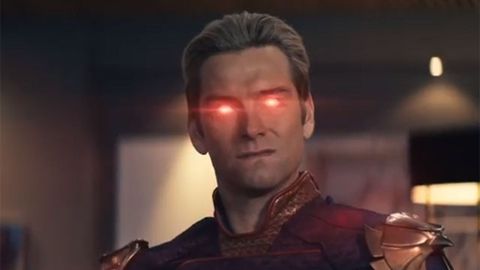 A necessary movement forward for many characters, albeit a bit heavy-handed with the emotional bombshells that'll surely leave their targets madder than ever.

After Stormfront’s (Aya Cash) catastrophic collateral damage during her apprehension of a “super terrorist” (aka Kimiko’s brother) last episode, it’s no shock that this episode’s continuation takes a comparative breather. Plenty of exposition dumps, road trips, and romantic drama without all the whale guts. The Boys can’t be decapitations and spontaneous combustions twenty-four-seven. Between Hughie (Jack Quaid) and Starlight’s (Erin Moriarty) complicated relationship, Butcher’s (Karl Urban) quest to free Becca (Shantel VanSanten), and the rest of the crew’s hangups, it’s time to clear some air.

Homelander (Antony Starr) will undoubtedly be wiping blood from his spandex soon enough. In the meantime, he's busy outing Queen Maeve (Dominique McElligott) as a lesbian on live television when pressed to address statistics that suggest roughly 90% of all superheroes are caucasian despite being created by Compound V.

At the heart of this episode is an impromptu drive to North Carolina, where second-tier ex-supe Liberty is supposedly living. Mother’s Milk (Laz Alonso) breaks the news as Hughie is consoling Starlight, who’s just been threatened once more by Homelander, so Hughie offers an olive branch by suggesting Starlight tag along. Mother’s Milk protests, then reluctantly agrees, and Hughie earns some much-needed personal time with the woman who almost incinerated his body before Butcher intervened during their previous drainage pipe standoff. Hughie and Starlight are allowed to trade banter, discussing lunatics who crave Almond Joys as their favorite candy bar, or sneak coy crush-giddy smiles in tiny car mirrors as if their feelings are secret. Mother’s Milk is stuck as their chaperone, cutting off their carpool karaoke of “We Didn’t Start The Fire.”

We glimpse the Starlight and Hughie I like most, free of Homelander’s untrusting surveillance or Butcher’s crosshairs. Too bad perfection never lasts.

Butcher is M.I.A. thanks to an uncharacteristically vulnerable Mallory (Laila Robins), who slips the trenchcoat bruiser an address where Becca might be kept. With nothing but a crowbar and aggression, Butcher infiltrates Vought’s gated community and locates his long-lost love, softening the British bulldog we’ve seen so far this season. Karl Urban flashes his lovesick charms as Butcher feels complete for the first time since Becca’s disappearance. Still, the supe-hater’s vendetta with Homelander brings out even more complexity in his not-so-one-note mercenary. Butcher begs Becca to flee Vought’s facility; the two share a night of passion in the back of an SUV, but Becca ultimately knows her husband (technically) will ditch Ryan, her superpowered son, the first possible instant. Butcher tries to contest the notion but slips when comparing Ryan to a Vought product with a price tag. He leaves pissed off, still heartbroken, and with even more reason to hate Homelander.

Elsewhere, Stormfront has seemingly launched a campaign to overthrow Homelander as the face of “The Seven.” Rather effectively, when the social media maestro holds a successful rally that denounces the efforts of Vought International. Memes flood the internet placing Stormfront’s face atop Homelander’s body, as Stormfront herself mocks America’s "savior" for appearing on Maria Menounos’ talk show instead of saving lives. Homelander bursts into Stormfront’s penthouse, demanding she back the hell off, but Stormfront only ups the vileness of her supremely problematic actions thus far (hate-speak, white supremacy, the works). “Emotion sells, anger sells. You have fans; I have soldiers.”

The words of a brilliant marketer who weaponizes media trends to mask her true intentions, as even Homelander balks at her unshakable wits. “You don’t need fifty million people to love you; you need five million people fucking pissed.” Homelander's blink-and-you'll-miss acknowledgment of equals, and backing down when he's challenged by Stormfront is both incredibly telling and admittedly a joy to watch.

I say this, with all respect to Aya Cash’s performance as a ruthlessly genius exploiter of the people: Stormfront is the prototype villain of our times, whose antics, in another world, would be as farfetched as we’d hope. Not here, the land of gifs and reality hosts.

Even more importantly, Mother’s Milk, Hughie, and Starlight finally reach their destination and are greeted by Valerie (Dawnn Lewis). She tells them a story about Liberty (it’s not Liberty’s address) only after Mother's Milk sympathetically offers his true motivation behind holding Vought accountable - the death of his father, a lawyer who dared challenge Vought in court until his last breath. An added layer of depth to the dollhouse-building family man who pursues justice in their honor.

Valerie details a superhero who decades prior stopped “crimes” in a red, white, and blue uniform, except based on Valerie’s first-hand account, Liberty tended to murder innocent colored citizens as an abuse of justice. What’s worse? According to Valerie, somehow, the “vanished” Liberty has resurfaced as Stormfront. Possibly due to Compound V’s enhancements? In any case, if that’s not a direct reference to racial oppression lying in wait to resurface as-bad once the time for “greatness” comes again, never erased after all these years, I don’t know what is at this point.

The episode ends with more emotional torture than just Butcher’s lonesome trek back to his Flatbush drug den hideout under a pawn shop. Starlight dashes Hughie’s hopes of a rekindled coupling, even after sharing a night of lusty motel playtime, once they return to reality in New York City. “We can’t afford to feel good or to feel safe or to let our guard down.” This episode is all about dangling that carrot of hope in front of characters, only to rip away their reward within reaching distance. Even Homelander, who’s losing control of his supe squad elite, is given more reason to rage onward. I feel a bad moon rising, especially when Butcher returns without Becca. Lulls only last for so long.