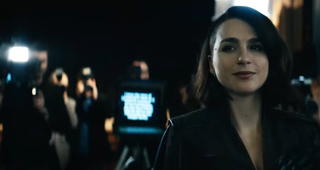 The second season of The Boys is dripping blood all over Amazon Prime Video and with that has come the newest member of The Seven, Stormfront. Aya Cash has joined the series as the gender swapped version of the character. Though not immediately obvious, Stormfront is the series’ adaptation of the comic book character who holds the distinction of being one of the earliest supes created by Compound V. How early? The Third Reich, early. Though we’ve only gotten hints of her Nazi allegiances in the marketing thus far, all signs point to her being a direct adaptation of the comic book’s zealous genocidal maniac from her preference for blue eyes to her eagle belt buckle.

A barely undercover Nazi joining the ranks of a private organization contracted by the government to act as weapons while creating manufactured enemies to justify use of military force in 2020? Topical.

The Boys has always been a scathing satire that lampoons American celebrity culture, politics and the military. Slapping a Nazi into their high power ranks would be a blistering statement on the ongoing climate. Speaking at the Comic Con: At Home panel, executive producer and showrunner, Eric Kripke said, “We try to make this not just like the most realistic superhero show ever made but we try to make it kind of a commentary on the up to the minute world we’re living in.”

The series has layers of themes about good guys being bad and bad guys being good, caricaturing polished media version of the military and the superheroes used for that purpose. A Nazi joining the squad would be an extension of that, and I hope the series doesn’t shy away from it. At the same Comic Con: At Home panel, Kripke let on that the show would be tackling issues of white nationalism and systemic racism.

Neo-Nazi and alt-right ideals are more visible in the United States than they have been in some years. Alt-right member have been named to high ranking government positions. There’s been a spike in neo-Nazi rallies, most notable being the Charlottesville rally in 2017 which had attendees chanting Nazi slogans. The President famously referred to the attendees as “very fine people.”

In May of this year as a response to the killing of George Floyd by law enforcement (and other similar killings), a large stream of Black Lives Matter protests flooded the country. The movement continued to reveal white nationalist ties in the police force and the military, which was unleashed on the American people. A recent FBI investigation concluded that white supremacist groups had infiltrated law enforcement in “every region of the country.”

In staying “up to the minute” in lampooning American military culture, it makes sense to have a neo-Nazi join The Seven.

Superman (and his Marvel counterpart, Captain America) fights for truth, justice, and the American way. Almost universally, that’s meant fighting America’s enemies. Both characters have punched Nazis on a collection of memorable covers, with Captain America literally being created as a response to them.

Military allegiance has gone almost completely unquestioned in superhero media, though in Captain America: The Winter Soldier, Cap questions the military complex, leaving him the good guy we expect him to be when he faces off against it. Superheroes, specifically the MCU, were recently scrutinized for their connection to the American military, specifically the fact that they collect funding from the Department of Defense. The Boys has never avoided shining light on these themes, directly connecting The Seven financially to the American government. Sneaking a Nazi into that mix would be in the tradition of ruthlessly criticizing that culture in the “up to the minute” way Kripke promised.

Reminiscent of the defunct site that shares her name, the Amazon series’ Stormfront is apt at building an internet following, posing a threat to Homelander’s crown and giving her the ability to shake things up at Vought HQ. She portrays herself as a modern feminist who loathes the “girl power” marketing campaign thrust upon her by Vought PR.

Is it exciting to have a presently apparent feminist member of The Seven, who's more powerful than the others, and actively chasing the white man’s crown and holding the patriarchy to task? Without a doubt. And losing her as a "hero" to the fact that she’s a violent racist would be that ruthless gritty realism The Boys injects into its entire self.

Homelander is both the one to one satirization and the antithesis of the Superman-like character. Making a great case for being the most Nazi adjacent supe himself, with use of nationalist and racist language. Stormfront would be the perfect counterpart to him, challenging him for the title of Leader while doing what he does (murdering people he believes beneath him to gain more power) better than him.

The Boys has never shied away from taking our Superhero fandom and throwing blood all over it in favor of rooting for the regular joes who take on the powerful system. Building on those ideas, having a genocidal maniac walk directly through the crowd to join the most powerful ranks of supes, working alongside the American military, would be the merciless slap in the face audiences might not see coming.