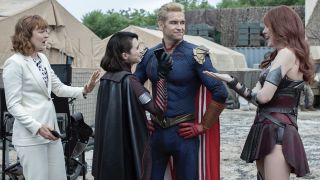 Are you ready for the return of the gnarliest, nastiest, and most gross out superhero show on TV? If the answer is yes but it's been awhile since you watched Amazon's smash-hit series The Boys then you've come to the right place. After the brutal events of the first season that saw Hughie (Jack Quaid) become entangled with Billy the Butcher (Karl Urban) and his vigilante anti-superhero group after the death of his girlfriend at the hands of A-Train (Jessie Usher), one of the corporate-owned supers known as The Seven.

With Hughie, Billy, and The Boys eventually killing a member of the lauded celebrity heroes who was known as Translucent (Alex Hassell), their lives quickly descended into chaos as they uncovered a shocking nationwide conspiracy, a superdrug, super-terrorists, and even a secret super-baby who may or may not be the child of arch-evil "superhero" Homelander. Essentially  there are plenty of questions that need to be answered when the sophomore offering of the comic book series hits this week, and--luckily for you--we are here to ask them!

What is Compound V?

It's the question at the center of The Boys' biggest mystery. In a world where superheroes exist, their presence has always been painted as a miracle--sometimes literally with an entire evangelical church built around the idea that they're a gift from God--but as we discovered in the first season the truth is far from heavenly. As Billy and Mother's Milk (Laz Alonso) realized when they uncovered a lab of laser-eyed babies, the supes were crafted by scientists at Vought.

But what is in this mysterious compound? How does it affect the heroes who are raised on it? We know that A-Train is addicted as was his former girlfriend and Teenage Kicks teammate, who he murdered with the drug. Plus, we've seen that most of the supers are incredibly unstable and have a penchant towards being complete and utter psychopaths. Maybe the drug has something to do with it? Could it even be something that Vought builds into the compound to make the heroes more dangerous? Or perhaps easier to control?

Whatever the answer, we'll likely find out more when season two hits as we were introduced to the man behind Compound V in the season finale, which leads us to our next burning question...

Who is Stan Edgar?

You always know you're in trouble when Giancarlo Esposito shows up and The Boys is absolutely no exception.

Even though we've only seen him in a fleeting moment with the now dearly departed Madeline Stillwell (Elizabeth Shue), his charming and friendly performance as Stan Edgar, founder and CEO of Vought, can hardly be trusted. We know that if there is a true villain in the series it is really the corrupt corporation that has created an army of celebrity superheroes. No matter what happens, Vought protects itself before anyone else. Remember the company had been protecting The Deep despite multiple instances of sexual assault until Starlight was brave enough to speak out during a public appearance. If Stan is the man behind the corporation he's likely going to be a terrifying foe, and we can't wait to see Esposito's turn.

Billy the Butcher's Wife is Alive?

The driving force of the first season and The Boys getting back together was the death of two women: Robin (Jess Salgueiro), Hughie's girlfriend, and the wife of Billy the Butcher, Beckah (Shantel VanSanten). The first episode of the series let us know in no uncertain terms that Robin would not be coming back, but Beckah's fate has always been left a little more vague and now we know why. She's actually still alive -which throws a wrench in Billy's whole vengeance schtick - and she's raising a superpowered child under the watchful eye of Vought International.

Viewers discovered this big reveal in a delightful bit of dramatic irony before Billy did when it was revealed to Homelander that Beckah was not only alive but had also mothered his child. His specific mix of psychosis and daddy issues meant that this news sparked off a murderous rage in the caped crusader. That led to the killing of Stillwell, whom up until that point had been in a creepy love-hate relationship with Homelander - shoutout to that faux breastfeeding sequence - but he wasn't done there and had to reveal the truth to his bearded enemy Billy.

The news shook the foul-mouthed leader of The Boys to the core and upended his entire world view, which sets up a whole new conflict for season two... after all, if Beckah wasn't killed by Homelander then Billy's new bleak life and quest for revenge that has consumed him was all for nought.

Sure, Ryan (Cameron Crovetti) has terrifying glowing eyes and the big bosses at Vought might have claimed he was Homelander's son... but can we really trust them? We know that the company is breeding babies and drugging them on a regular basis, so doesn't that mean that there's a chance Ryan could have been Billy's son who was given Compound V? Rather than a naturally occurring supe who was created by the horrible Homelander?

Whichever route the series goes, they've already changed the source material substantially as Billy kills the super powered kid after his wife dies in childbirth in the original comic books by Garth Ennis and Darick Robertson. The comics are even more gruesome than the show if you can believe it, and the series isn't too worried about straying from the story when necessary, which has actually been to the benefit of the show. Not only does it add an extra layer of surprise and mystery for those of us who have already read the series, but they've also adapted some of the more outdated moments that have aged badly - Starlight's introduction, for example - and thoughtfully updated them for the small screen, the time, and the wider audience.

Who Will Replace Translucent in The Seven?

After his untimely death at the hands of Hughie and a bomb placed somewhere unmentionable, Translucent is no more. It's not really a loss of substance as the villain was just as entangled in The Seven's criminal antics as any of its members. His grisly death did leave a spot in the team, though, and the person who fills it will likely play a key role going forward. The comics offer up plenty of potential members, but a casting announcement and the recent trailer have revealed the answer to be a reimagining of Stormfront, (Aya Cash).

The genderbent casting was an interesting twist on the character, and it's yet to be seen whether or not she'll be the fascist scumbag she was in the comic, but the fact that Stormfront seems to be incredibly internet savvy and has an army of trolls at her disposal hints that she'll be living up to that terrible legacy in a very modern way. After all, what's more "now" than an alt-right internet personality being handed the spotlight in an utterly dangerous way?

The question that's likely weighing heaviest on the minds of The Boys' star crossed lovers Hughie and Starlight, the fate of A-Train and the secret he uncovered will be key going forward. During the first season the young members of both teams built a romance that seemed far purer than anything else in the Vought-tainted world of the show. But Hughie's choice to lie to Starlight about his connections to The Boys and to use her for his own gain meant they ended the series on less than great terms. During their final adventure and interpersonal showdown they also saved the life of A-Train, who collapsed in front of them after uncovering their relationship.

As we delved into earlier, A-Train has secrets of his own, including the murder of his longtime partner, so it's not like Starlight doesn't have leverage too. As the two young heroes head into Season 2 it's likely that we'll see them duke it out.

Will The Deep Return from Sandusky, Ohio?

Before viewers truly understood how The Seven was rotten to the core they met The Deep (Chace Crawford), the attractive Aquaman analog who sexually assaulted Starlight on her very first day. It was a brutal hint at what was to come and was a defining moment for both heroes. As Starlight continues her meteoric rise to the top, The Deep has been banished to Sandusky, Ohio where he's languishing in the bottom of a glass, far from the hero he once was.

As we left the pathetic wet boy it seemed like he'd been abandoned by The Seven, but that doesn't mean there isn't more story for him to tell. Considering that he was punished by Stillwell, who died after a fatal interaction with Homelander's laser peepers, it definitely seems like there's a chance for him to redeem himself in the eyes of Vought. But the real question is whether he'll ever redeem himself to the women he assaulted and abused as a member of The Seven...

Could Starlight Lead The Seven?

This might seem like an out of the blue suggestion, especially as she's trying her best to take them down, but Starlight is the only member of the super team who isn't either a complete villain or a total coward. With Vought looking for a rebrand after the death of Stillwell, there's a good chance that her aptitude at playing to both the audience and the overlords could see her take on a leading role in The Seven. Whether she'd fully commit to the bit and eventually turn is still to be seen, but if she really wants to take down Vought and the people who gave her the powers that made her famous then there's no better place to do it than from the inside.

You can watch The Boys Season 1 on Prime Video now and Season 2 hits on Friday, September 4th.