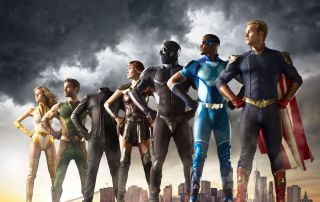 Looks like we've got another clip to go along with the season two trailer for Amazon Prime's The Boys. Fresh out of Comic Con at Home, Butcher (Karl Urban), Campbell (Jack Quaid) and the rest of the boys find themselves face to face with The Deep (Chase Crawford) and his trusty whale.

Things might not end up going so well for that whale. Let's take a look at the clip!

Ok, so, things definitely didn't go great for the whale. Seems pretty safe to suspect that The Deep isn't going to be too pleased when he wakes up, either. Though, as I write this it occurs to me that they're all smothered in whale guts so, y'know what? Let's just go ahead and assume that everyone's less than pleased with the situation they've found themselves in. Seem fair?

The Boys will return to Amazon Prime Video with their second season on September 4th. Butcher and his gang (and his enemies) will be picking up right where they left off, if trailer footage is to be believed. So, be sure you've spent some time catching up before season two drops!