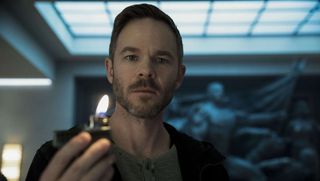 Sean Ashmore's comin' in hot to a Season 2 of The Boys near you. The X-Men alumnus' involvement was announced today via a press release from Amazon Video.

Ashmore will be switching things up from his previously chilly role as Ice Man to become Lamplighter. So far, we know that this new character has ties to both the Supes and The Boys, meaning his introduction is likely to tick off a whole lot of folks on both sides of the superhero aisle. On the Supes side, Lamplighter mysteriously left the team and was eventually replaced by Starlight. So far as The Boys go, it sounds like he may or may not be the reason they broke up all those years ago?

Ashmore shared some commentary on his new role:
“I watched the show before I was cast, so I sort of knew [Lamplighter] and I was wondering about this character. What was fun for me stepping in is that a lot of the mythology and the backstories are already built, and I was asking myself who is this character? What is this character? There’s going to be a preconceived notion of who this character is based on his actions, based on how people talk about him. What the show does well with everybody including Lamplighter is peel some of those layers back.”

Looking for more information on The Boys? We've got a couple of trailer posts with some exciting (whale filled) sneak peaks of the coming season.

Season 2 of The Boys will premiere on Amazon Prime on September 4th, but don't expect to binge this one! You'll have the first three episodes on the 4th, and then will get weekly installments until the finale. Gotta spread out that fun whatever way you can!