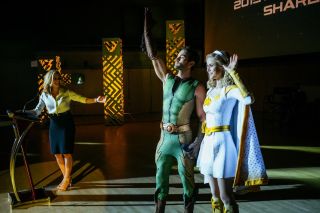 Amazon Prime Video is upping its The Boys content as we get closer to Season 2's September 4th release date. (The fact that their TCA panel took place today probably played a role here, too.) This time, we get a glimpse into what happened after Billy and company drove their boat through The Deep's friend.

Ok, so yeah. That whale is definitely dead. The Deep (Chase Crawford), understandably upset at the loss of his companion, has some other things to deal with though. Homelander (Anthony Star) is visibly frustrated by Deep's lack of urgency involving the "terrorists", but let's face it: that's the least frustrating quality about the waterlogged "hero".

A fact that Starlight (Erin Moriarty) and Stormfront (Aya Cash) are more than happy to call out. Both women quickly call out the fact that he's both an idiot and kind of a creep, but The Deep is convinced he can make them see the better side of him. There's a church involved. He feels persecuted. Listen, you watched the same clip.

If you're looking for more content on The Boys Season 2, you can check out their Comic-Con@Home trailer, as well as their first official trailer.

Season 2 Synopsis:
In a more intense, more desperate Season 2 of The Boys, Butcher, Hughie and the team reel from their losses in Season 1. On the run from the law, they struggle to fight back against the Superheroes. As Vought, the company that manages the heroes, cashes in on the panic over the threat of Supervillains, and a new hero, Stormfront, shakes up the company and challenges an already unstable Homelander.