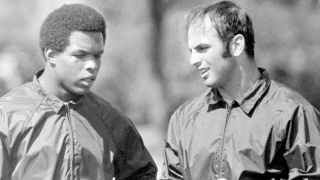 There is, perhaps, no better sports movie — certainly not a more emotional sports movie, anyway — than the 1971 film Brian's Song.

The film told the story of Chicago Bears stars, teammates, friends and roommates Gale Sayers and Brian Piccolo. It's a story of triumph and tragedy. Of overcoming injury and making it back to the height of the profession.

It also will leave you a complete mess, masterfully played by James Caan and Billy Dee Williams.

Sayers has died Wednesday at age 77 after living for some time with dementia.

"The NFL family lost a true friend today with the passing of Gale Sayers," NFL commissioner Roger Goodell said in a statement. "Gale was one of the finest men in NFL history and one of the game's most exciting players.

"We will also forever remember Gale for his inspiration and kindness. Gale's quiet unassuming demeanor belied his determination, competitiveness and compassion."

All of those things, and then some, were captured in Brian's Song.

"Football fans know well Gale's many accomplishments on the field: a rare combination of speed and power as the game's most electrifying runner, a dangerous kick returner, his comeback from a serious knee injury to lead the league in rushing, and becoming the youngest player inducted into the Pro Football Hall of Fame," Bears Chairman George H. McCaskey said in a statement. "People who weren't even football fans came to know Gale through the TV movie 'Brian's Song,' about his friendship with teammate Brian Piccolo. Fifty years later, the movie's message that brotherhood and love needn't be defined by skin color, still resonates."