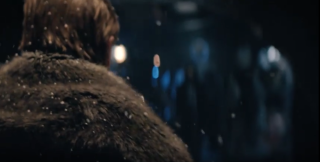 This post contains spoilers for season one of Snowpiercer.

If you've been following along with TNT's Snowpiercer and our respective coverage, you know that Mr. Wilford (Sean Bean) has essentially been portrayed as the series' very own Wizard of Oz. We know by now that the engine eternal, and all of Snowpiercer's moving parts were designed by Melanie Cavill (Jennifer Connelly). Late in the season she even reduces Wilford to "a glorified ticket salesmen".

When we leave the the group at the end of season one, young Alexandra Cavill (Rowan Blanchard) has breeched the hull of Snowpiercer after the train was boarded by a prototype engine that no one had any idea was active until the finale. This development, the survival of Alexandra, and the continued existence of one Mr. Wilford changes the entire landscape of the series going into season two.

Because you were all good boys and girls and watched the season finale, TNT has given us a special peak at season 2.

There's not a ton there, but we do get our first glimpse at Sean Bean as the presumably charismatic Mr. Wilford. We don't know how the residents of Snowpiercer are going to overcome their current obstacle just yet. But they better do it fast. Thirteen minutes isn't a lot of time to kick pirates of your train and uncouple all their mechanics from your own.

The current release date for season 2 is unknown. While filming is nearly wrapped, COVID put a halt to production for the foreseeable future. Stay tuned for news as it comes!