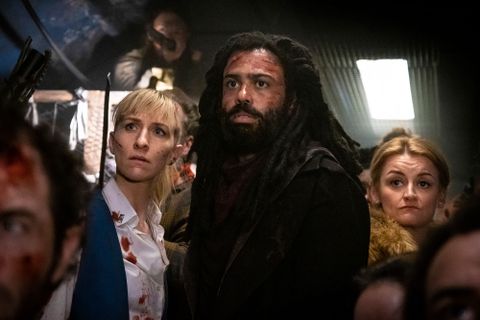 A fitting close to a stellar first season.

Plenty of parallels can be drawn between TNTâ€™s Snowpiercer and the hit musical Hamilton, and not just because Daveed Diggs crushes his roles in both of them. Their poorest citizens do live ration to ration, but in the showâ€™s two-part finale itâ€™s George Washingtonâ€™s â€świnning was easy young man, governingâ€™s harder,â€ť that hops to mind. Melanie Cavill (Jennifer Connelly) might be a tyrant, sure. But the showâ€™s finale is going to leave Andre Layton (Daveed Diggs) with an impossible choice that will help him understand why the trainâ€™s previous leader is the way she is.

Because of the nature of a two-part finale, itâ€™s difficult to give a synopsis without going to spoiler town. Things will occur in the first hour that directly lead to the second, but the outcome of the first tells you something that youâ€™re going to want to see for yourself. So, with that all in mind, your very basic synopsis is this: just when you think thereâ€™s been a resolution to the war, everything goes to hell again. An unexpected problem will arise that further complicates the allegiances and class status of everyone on the train.

Oh, and while every show finale wants you to believe that the results of their ending will mean that the series will â€śnever be the same againâ€ť, know that when Snowpiercer says it, it damn well means it.

While the finale doesnâ€™t wrap everything up in a bow, you will see long overdue conversations between character pairings. Bess Till (Mickey Sumner) has a couple of passionate speeches. Oneâ€™s to Roche (Mike Oâ€™Malley), and the other to Jinju (Susan Park). Pike (Steven Ogg) and Layton will collide, though probably not in as aggressive of a manner as viewers may have hoped. Even little LJ Folger (Annalise Basso) manages to find a friend when she thinks she has none.

The most interesting shift between characters is the complex dynamic between Layton and Melanie. Youâ€™ll recall that Melanie murdered the love of Andreâ€™s life not two episodes ago, so itâ€™s not like the two are looking to be friends anytime soon. With that in mind, thereâ€™s still the survival of humanity at hand. Each character represents a polar opposite, and those polar opposites need each other to ensure that their species lives on. Mortal enemies forced to work together to accomplish a common goal will never not be the best stuff on TV. Add in the fact that Andre Layton and Melanie Cavill are both deeply layered and complicated characters? Yeah, thatâ€™s the good stuff.

The best moment to play into the dynamic between the two leads is the most difficult decision of Andreâ€™s life. No spoilers here, but it's the very same moment discussed in the intro and you will very much know it when it arrives. It is the single most tense moment of the series, and it will change our noble hero in ways that no other action has. The decision Andre is forced to make will somehow both drive he and Melanie further apart while bringing them closer to understanding each other at the same time and that, boys and girls, is good storytelling!

With that, the simplest fact about the Snowpiercer finale is this: you just arenâ€™t ready. A lot happens in two hours. Some of itâ€™s expected, some of itâ€™s exhausting (Iâ€™ve quickly grown bored of authoritarian Ruth), but all of it plays a small part in a bigger picture that will leave your jaw on the floor. The first half is unquestionably stronger than the second – which may or may not have played a part in the combination of the two episodes – but the end result will have you immediately googling when season two will premiere. (Iâ€™ll save you some time – we donâ€™t know yet.)

Ending your season on a cliffhanger can be hard. Some viewers will always be dissatisfied with a finale, but that risk is always higher when you leave things hanging. All you can do is hope that more folks fall on the positive side than the negative. By and large, Snowpiercerâ€™s finale pulls that off. The first hour may be stronger than the second, but the sum of the parts stick the landing.

The dystopian future is an emotional one, and the finale hits every beat that it should. Ice cold characters weep, the weak are strong, smaller characters have moments in the sun and it all comes together to form a perfect â€śendingâ€ť to an intricate game of chess. Though we donâ€™t know the air date, we do know that season two has both been confirmed and was nearly done filming before the pandemic hit, so be ready for the ride to continue in the not-so-distant future.