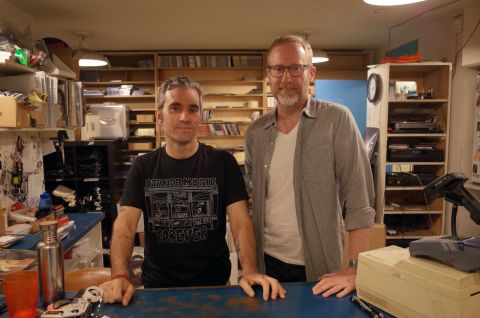 Puloma Basu and Rob Hatch-Miller wring real emotions out of the store's final days with a patient, thoughtful look at Other Music's legacy.

The elegiac Other Music pays tribute to a shuttered record store whose 20-year history captures an industry, a community, and culture in upheaval. Directors Puloma Basu and Rob Hatch-Miller chronicle the final few days before the store closed permanently in June 2016, reflecting on the ways in which this New York institution became a bellwether for changes both good and bad in the music business and consumer habits in general.

Arriving on demand in August after its theatrical run was cancelled due to COVID-19, Other Music’s lessons feel even more profound - and bittersweet - now that businesses in so many industries are struggling around the world. Basu and Hatch-Miller frame their film around the store’s final few days as co-owners. Chris Vanderloo and Josh Madell prepare to shut it down after two decades, hundreds of employees and thousands upon thousands of record collectors from around the world passed through its doors. Suffice it to say that legacy means more to this independently-owned business than the Tower Records literally across the street (that it outlasted), especially given the duo’s commitment to creating a climate where employees and customers alike could seek out, share and discover artists and albums virtually unknown, even if not necessarily unavailable, anywhere else.

The tiny space on East 4th Street barely contained the music on the shelves, but Basu and Hatch-Miller revisit many of the in-store performances they regularly staged by moving the racks and crowding in people to capacity. Their DIY approach spoke to a passionate, inclusive, curatorial spirit, with handwritten cards for the artists they sold, paired with brief “reviews” posted to describe or champion albums many of even the most knowledgeable musicphiles were only discovering for the first time. Via recollections by interviewees like Jason Schwartzman and Regina Spektor, the categories into which their wares were broken down were decidedly “intimidating," featuring such cryptic headers as “In,” “Out,” and “Decadanse.” But unlike so many of the cantankerous vendors of yesteryear, fortified in castle made of impenetrable, encyclopedic knowledge, Vanderloo and Madell (and their coterie of staff members) made the process of discovery exciting, and tried to facilitate an inviting climate, even if staff patience levels didn’t always bear that out.

Vanderloo and Madell teamed up after working together at old-school NYC staple Kim’s Underground, another haven for media collectors that probably deserves its own documentary. The way that they attempted to accommodate the changes happening in the music industry, more or less picking up the lead from their old stomping grounds, serves a larger observation. One about the peccadilloes of consumer practices and culture in general as CD sales dwindled, music piracy imploded profit margins, online vendors like iTunes rose to prominence, and eventually, streaming services made it nearly impossible for brick-and-mortar stores to compete. Yet, what enabled the store to flourish leading up to the era of mp3s and Spotify - well, briefly - was to provide the same service, with more specificity and idiosyncrasy, that algorithms eventually began doing but with less personality and context.

Delightfully, Basu and Hatch-Miller more or less recreate the moment from John Cusack’s High Fidelity where an employee plays a song in store and patrons feverishly rush to buy it immediately - in this case, a calypso album someone scarfs up in “a minute and 17 seconds.” While for some employees the store was an escape, to locals, a community center, and to musicians who visited and even got their start trudging back and forth in its aisles, a temple, Other Music became the glue that held together some of the last vestiges of the East Village’s raucous artistic history. The documentary really evokes that passage of time, not just in the loss of the store, but as that cornerstone for a New York that has become increasingly polished and corporatized.

Skillfully characterized by one interviewee as “that place that knew what you wanted before you knew what you wanted,” record stores make an impact on the communities they serve that’s hard to overstate. In the case of Other Music, it served one that was global, first by recognizing and celebrating records from around the world, and then by delivering them, one at a time, to individuals seeking the kind of diversity, then knowledge and enthusiasm, that was more than gratifying - it was infectious. In fact, there are dozens of online vendors (if, sadly, probably only a similar number of physical stores worldwide) aiming for the same consumer, and the same audience, that Vanderloo and Madell successfully reached from 1996 to 2016. All of which is why Other Music simply and beautifully pays tribute to what was not only a geographic but an industry standard bearer - even if the industry left it behind - by celebrating a legacy of collecting, celebrating and sharing music that to its customers and disciples will forever remain “in.”

Other Music will be available on VOD August 25th.