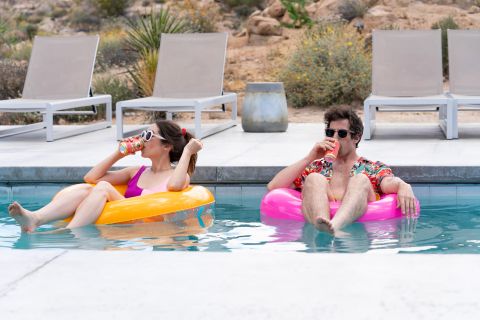 Andy Samberg and Cristin Milioti make being stuck in the desert seem like a blast in a fun new take on the ol' time loop conundrum.

Time loops are tedious. Even in Palm Springs. They're a pain in the butt for anyone caught in one — having to re-live the same day over and over. (At least that's what I assume, with my own personal simulation still remaining perfectly linear.)

Time loops also can be a drag on those of us stuck watching the people in the time loop. We know they're there. We know the rules. We know at some point they're going to do something redeeming that finally breaks the time loop. (This part I know a little more about, having seen Bill Murray in Groundhog Day as much as anyone, watched Tom Cruise and Emily Blunt in Edge of Tomorrow a few too many times, and having sat through the 87 minutes of the Hulu Original Palm Springs starring Andy Samberg and Cristin Milioti.)

Or they're just going to strap a bunch of C-4 explosives onto their back and try to disrupt things that way.

Whereas Groundhog Day had Bill Murray (yes, he's another one of those actors whose name must be written in its entirety each time, every time) stuck in scenic Punxsutawney, Penn., on Feb. 2, we arrive in Southern California on Nov. 9 and are immediately greeted by ... a goat.

That part's important, actually. Don't forget about the goat. He plays a crucial part in this movie, even if we (and the goat) don't know it yet. We're then treated to an earthquake that seems to open up some sort of seam of what we can only assume is space-time. And then ...

Nyles (Samberg) awakens. His girlfriend, Misty (Meredith Hagner) is rubbing lotion on her legs, which she assumes is enough to get Nyles going in the morning. She's probably not wrong, but it's also pretty clear that he's going through the motions even more than she is. Looks like he's already stuck in the time loop.

The thing is, Nyles seems to be pretty content in going through the motions. Beers in the pool, beers during the wedding, beers at the reception. Schmoozing the guests, and being very cool about putting the moves on Sarah (Milioti). Sarah's sister, Tala, is the one getting married, and Sarah is going through the expected motions of a sibling.

Sarah and Roy end up out in the desert, doing what one or two (or 10 or 12 depending on the party) do in the desert, when suddenly an arrow embeds itself in Nyles' back. That, it should go without saying, was a surprise to everyone except Nyles and the person who shot the arrow. Which is to say Nyles was simply pissed off about it and stumbled off to the glowing cave up the hill, while Sarah was in a good bit of shock.

The glowing cave turns out to be the source of the time loop. It's how Nyles got stuck who knows how long ago. It's how Sarah — who didn't listen to Nyles' pleas for her to not follow — got stuck in the loop.

Palm Springs thankfully doesn't spend too much time on the same old time loop tropes. Yes, dying resets the day. So does falling asleep, or slipping back through the cave. Other than that, the world's your oyster.

Nyles and Sarah have a blast, for a while, which is exactly how you'd expect this sort of thing to place out. And how it's played out in the past. And how it'll play out again in the future, because time loops are infinite, even if you get out. (Hang on to that thought for a minute.)

But Sarah eventually wants out.

Secrets catch up to everyone, even those caught in a time loop. Nyles — who has been fine living a life with as little friction as possible, even if it's the same one over and over again — admits he'd actually wooed Sarah "thousands of times." (So he's been stuck in the loop for years.)

"Pain matters," Nyles told Sarah in the blow-up that preceded the disappearance. "What we do to other people matters. ... It doesn't matter that everything resets and people don't remember. We remember. We have to deal with the things that we do."

Sarah finally does find a way out of the loop. And it doesn't have anything to do with learning not to only think about yourself and to do some sort of truly unselfish act. She does that, sure, and that's great. But breaking the loop really just took a bunch of resets to learn quantum physics and find some C-4 explosives and test them on the goat in the cave and finally convince Nyles that this is the right thing to do and that she loves him, too, and that everything will be OK one way or another.

Yes, they fell in love. But you knew that was going to happen, right?

Roy and Nyles partied way too hard on one of the resets, and Roy ended up in the cave and stuck in the loop. And he's pretty pissed at Nyles about it and occasionally shows up to kill and torture just to make himself feel a little better about it. But Roy also happened to have driven in for the wedding from Irvine, Calif., and because that's where he woke up the morning he fell into the loop, it's where he wakes up on every reset.

But think about it — just because a loop is broken doesn't mean time stops. It just means that that version of it stops, where the same day happens over and over again.

So, yeah. Palm Springs is another Groundhog Day. It's a funny, feel-good movie that doesn't take itself too seriously, is plenty self-aware about the whole time loop thing, and is a fun watch even though you definitely feel like you've been here before.

But that is, of course, precisely the point.