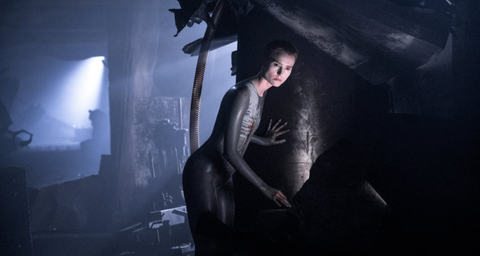 This post contains spoilers for Raised by Wolves.
Check out our review of the previous two episodes here.

When an episode begins with a character cutting off his face, you know you’re for something special. With another two episodes in the books, Raised by Wolves once again flexes its range, demonstrating a propensity for violence we have not seen since the pilot. As Mithraic prophecies swirl around the show’s central characters, Raised by Wolves shows that there are no plot points so big that creator Aaron Guzikowski cannot drive through it rather than around.

When last we left our characters, a wounded Mother (Amanda Collin) was fleeing the camp as Marcus (Travis Fimmel) gave himself over to his true calling as the word of Sol. “Mass” opens with Mother stumbling back to the Ark – the Mithraic ship she brought down from the sky – searching for medical supplies. Soon she discovers a half-carbon lifeform gestating in her belly; the glitched-out facsimile of older Campion (Cosmo Jarvis) explains that he has provided her with that which she always wanted, even as she attempts to reject his “gift.” Meanwhile, Paul (Felix Jamieson) and Sue (Niamh Algar) unite to free the younger Campion (Winta McGrath), leading a group of children out in the wilderness and away from the ritualistic demands of Marcus and his believers.

“Umbilical,” the second episode released today, finds even more absurd storylines to follow. While the highlight of the episode is Tempest’s long-awaited revenge on the former high priest Bartok (Litha Bam) – one could watch his head-crushing sequence on a loop for hours – we are also treated to Mother’s religious visions and the unending flow of blood into her unborn child. We also see Father (Abubakar Salim) return from the dead (again) thanks to the codebreaking skills of Hunter (Ethan Hazzard). Even as the children cling to their religious beliefs, this ragtag group of survivors finds comfort in the arms of nonbelievers and androids as the battle lines become fully drawn.

Since its pilot, Raised by Wolves has proven itself capable of straddling multiple storytelling modes without ever feeling fractured. But while previous episodes have balanced science fiction and dystopia in equal measure, “Mass” is as straightforward a horror story as you will ever find. Much of the episode centers on Mother’s symbiotic relationship with the Ark’s surviving medical droid, Karl (Carel Nel). When Mother realizes that her embryo needs additional substances, she connects herself to the half-destroyed corpses of Karl’s brothers, leaving his inhuman eyes to dart around the room as her spiderweb of umbilical cords drain the life from a dozen different androids.

Raise your hands if you were expecting android body horror with a dash of Del Toro.

While Karl is meant to push the uncanny valley’s boundaries, he also hints at a darker future for Mother and her progeny. In creating the Necromancers, the Mithraic “followed the formulas they discovered were encrypted in their scriptures,” Karl explains. “With no understanding of the underlying concepts.” This is the most tangible glimpse we’ve been offered of the connection between Sol and the practical world. While the Mithraic god can certainly whisper with the best of them, the connection between this religion and believers’ advanced technology has never been made more explicit.

This revelation also explains how Mother could be pregnant with a half-carbon life form, despite this defying all sense of reason (as half the cast is all-too-happy to explain). Mother’s sudden turn towards the vampiric may seem like another odd departure in the history of the show, but it continues to push the boundaries of motherhood as both concept and biology. Sue, Mother, and Tempest are now inexorably linked; three unlikely mothers, each of whom struggles in one way or another to accept the burden that has been placed upon them. It does not always fit together – these are men writing these episodes, after all – but there’s a grandeur to these interactions that makes them fun to watch.

And speaking of Sue, “Mass” and “Umbilical” offer everyone’s favorite atheist-turned-Mithraic-lookalike a much deserved time to shine. Sue has long been the moral center of the show; while Mother might receive the biggest slice of screen time, it is Sue and her evolving relationship to her not-child Paul that feels like the most grounded element of the series. Surrounded by zealots and violent androids, Sue’s embrace of her role as Paul’s guardian – and her rejection of the rigid boundaries of Mithraic and atheist – offers some small marriage of the rational and irrational present in the series. It is nice to finally see her operate independently of Marcus, especially given the one-nature of his ongoing epiphany.

With only the finale left to air, Raised by Wolves does not pretend to operate within a seasonal storyline. This show will introduce big concepts right up until the end, with vague promises that maybe (maybe) some of these narrative threads will come together before all is said and done. But there is a difference between dumping ideas to churn plot and teasing a bigger world than currently fits on the screen. Aaron Guzikowski and company have grand designs for humanity’s future, and with a second season now confirmed, the pressure is off audiences to find closure in the inevitable cliffhanger. There will be plenty of time to delve into the weird depths Raised by Wolves has to offer in Season 2.

You can stream Raised by Wolves on HBO Max.