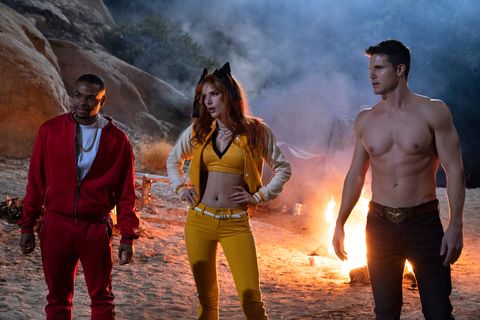 'The Babysitter: Killer Queen' is a sequel that's unintelligibly out of touch with its predecessor, displaying no examples of comprehending what makes 'The Babysitter' energetic, enjoyable, or effortlessly crazed.

As an outspoken - nah, leading - advocate for McG’s The Babysitter, I consider The Babysitter: Killer Queen a personal betrayal. The sequel, which sorely misses original writer Brian Duffield, views itself as this irreverent 80s-homage continuation that breaks all the rules. Maybe, if there was any method in McG’s sacrificial mayhem? Run-it-back mentalities cause a disjointed mess of obnoxious needle drops and nonsense plot deviations that are destructively shortsighted. It’s embarrassingly unfocused, sloppy with its Terminator or Deliverance obsessions, and low-key icky. A movie that begins and ends with a line about getting “laid," with cringe-y horror-adjacent misfires filling all the cracks in this flimsy, aerated, Swiss cheese screenplay.

I haven’t been this disappointed in a genre sequel since...well, it doesn’t matter because The Babysitter: Killer Queen is my new go-to example for the foreseeable and unforetold future.

It’s been two years since Cole (Judah Lewis) defeated a blood cult led by his babysitter Bee (Samara Weaving). The memories of that night - murder, explosions, and shirtless psychopaths - are fresh in Cole’s mind, but with no evidence, all anyone can do is doubt. Rumors have turned Cole’s high school experience into a bullied hellscape, except for best friend and crush Melanie (Emily Alyn Lind), who invites him to a beachside party because "Thelma" needs her "Louise." Cole agrees, only to find John (Andrew Bachelor), Max (Robbie Amell), Allison (Bella Thorne), and Sonya (Hana Mae Lee) back from the dead, ready to reattempt their mission, and with a new ringleader. Cole’s only ally? The rebellious and possibly dangerous Phoebe (Jenna Ortega).

Say what you will about The Babysitter, but at least it’s a competently plotted overnight massacre that retains structure. The Babysitter: Killer Queen scoffs in the face of development and spits in the general direction of scene transitions. The screenplay, co-written by Dan Lagana, Brad Morris, and Jimmy Warden, is a catastrophic jumble of lazy motivations, zero investment beyond deaths for giggles, and pointless interludes that are so desperate to win over B-movie lovers (blink-and-you’ll-miss flashbacks, innuendo dance interludes, etc.). McG is going for “off the wall,” with a more inflexible reliance on comedy that’s devastatingly unfunny. Look no further than a “climactic” fight sequence between rivals, which tries to recreate a Street Fighter video game vibe that does generate quite a laugh - but for all the wrong reasons.

McG is not Quentin Tarantino, Edgar Wright, Joseph Kahn, or any of the other notable filmmakers he emulates (poorly).

The Babysitter: Killer Queen wants to be a satire on high school hierarchies and institutional shortcomings, but with the awareness of a kitten who keeps seeing new shiny objects. For example, Melanie rambles through a whole monologue about how kids rely on pills to stay normal these days - complete with graphics hovering over students as their “flavor of choice” is explained - only to mean nothing a few minutes later. Or maybe it’s Cole’s interaction with a quick-e-mart cashier who’s, distractingly, wearing a two-piece leather outfit that would be risqué even for a gentleman’s club, over and done with before we can even make sense of the scenario. These are just two random examples from a grab bag of regrettable gags produced and tossed away within seconds like a Carrot Top set.

Where The Babysitter revels in its action-horror roots and accentuates the cult’s personalities, The Babysitter: Killer Queen becomes a mockery of itself, parodying mindless horror sequels that McG, in turn, cannot even replicate. Any baddie’s character evolution is non-existent, as their “greatest hits” rock the crowd. Max flaunts his abs and emasculates Cole again, John is stammer-witty useless again, and Allison shoots herself in the boob again (also animals because why not). It is, quite frankly, one of the lamest excuses to resurrect cast members in horror history - Samara Weaving's far too little, far too late resurfacing included. McG’s only saving grace in the entire film comes with the grisly re-demise of each satanist, where practical effects amplify the otherwise CGI-heavy gore that mostly disappoints. Sonya’s execution specifically, which is divine bodily desecration.

Not only is Brian Duffield’s storywork sorely missed, but Weaving proves why she’s the reason The Babysitter succeeds in its pop-culture influenced horror antics. Emily Alyn Lind steps in as the not-actually-so-nice newbie filling Weaving’s shoes, but much more diabolical (oddly done-up to resemble Weaving). Alas, nothing compares to the charisma, crazy-eyes, and complex anti-heroism that Weaving is capable of, plus the material most other actors are working with is groan-worthy at best. Bottomless stereotypes, whether it’s Thorne’s homicidal hottie, Amell’s macho madman, or Bachelor’s incessant one-liners that are so try-hard and obscure in the moment. New characters are even more useless, from an incompetent policeman to Chris Wylde as Melanie's irresponsible pothead father. It’s painful to endure, realizing how poorly this reflects on the incomparably superior original.

The Babysitter: Killer Queen feels like a horror movie crafted by an algorithm fed 80s VHS non-classics that was only tweaked to add TMZ buzzwords and “Film Twitter” hashtags. A narrative frequently at odds with itself, it’s lackluster ambitions, and the genre it ends up sullying instead of honoring. Congratulations, I guess, since one or two deaths will make my “outrageous kills” recap come the end of 2020. Everything else? McG copies the same recipe but loses half the ingredients. What an abysmally phoned-in quest for ritualistic immortality without any hint of what made The Babysitter what I’ll always remember, and refer to, as a standalone victory with no ties to some soulless imposter that fails to entertain on a titanic level.