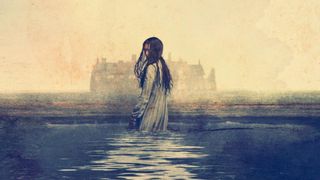 This post contains heavy spoilers for Netflix's The Haunting of Bly Manor.

Mike Flanagan's highly anticipated follow up to The Haunting of Hill House has arrived and it's perfectly splendid. If those words sent shivers up your spine then you're probably fine to finish this piece but if not be warned that from here on out spoilers abound for the whole series.

It's well known that The Haunting of Bly Manor is based on Henry James' gothic masterpiece The Turn of the Screw, but what took us by surprise was how vital some of James' other ghost stories were to the stunning series. Flanagan and his team adapt a selection of the author's stories with each of the episodes named after a classic yarn. Plus there are plenty of other nods and references to his works thrown in for good measure. Whether you're new to the author's dark and delightful work or a big fan who caught every story we're here to break down the key tales that we see brought to life in the new series and how they connect with the ghosts of Bly Manor.

The Turn of the Screw

This is the story that started it all... well in the case of The Haunting of Bly Manor. When Netflix announced its followup to The Haunting of Hill House gothic horror fans were delighted by the fact Flanagan and co. would be taking inspiration from James' iconic novella. In case you haven't read the classic first person short story here's what you need to know: It centers on a young woman who moves into a huge and beautiful mansion to take care of two orphaned children Flora and Miles. The terror comes when she begins to see ghosts around the stately home--including the spirit of the children's last nanny--which she believes her charges communicate with, but no one else apart from her ever truly sees them. Turn of the Screw is a chilling tale that plays on the unreliable narrator and still leaves readers asking whether or not it was all in the nanny's mind over a century later.

The Haunting of Bly Manor takes its general structure from the story, Dani (Victoria Pedretti) a young American replies to a job listing for an "au pair" read that as fancy nanny, and heads to Bly Manor. Multiple characters from the original also appear in a spectrum of reimaginings. Mrs. Grose (T'Nia Miller) is a far more tragic heroine in Flanagan's vision though her love for the children and connection to the house is still key. Miller is stunning and as it's slowly revealed that Mrs. Grose is another of the house's ghosts we get a truly heartbreaking look at grieving, love, and loss. Peter Quint (Oliver Jackson-Cohen) is a valet in the books but appears here as an associate of the children's uncle. In the series he's thought to have stolen from the family and disappeared but it's later revealed that he's actually dead. In both of the versions he's the first of the house's ghosts that Dani truly knowingly comes up against, and is a part of one of the three love stories which drive the Gothic Romance at the heart of The Haunting of Bly Manor.

That brings us to Ms. Jessel (Tahirah Sharif). The children's former nanny apparently died at her own hand and is the heart of the tragedy at the center of Bly Manor. In both versions she's close with Peter Quint, but Flanagan utilizes the pair to create a devastating parable about abuse, love, and toxic relationships. Their love drives Jessel to allow Quint to treat her badly, and despite that she trusts him so much she puts her life in his hands, literally. The pair's connection to Flora and Miles is key in Flanagan's version and in what seems to be a reference to Henry James' inspiration for the story which was apparently a story told by a friend about "small children haunted by the ghosts of a pair of servants who wish them ill" Quint has a plan for Flora and Miles that is at the core of the story and puts Dani on a heartbreaking path.

In one of the season's scariest episodes we venture into the dark mind of Miles and Flora's uncle Henry Wingrave (Henry Thomas). Episode six of the series explores Wingrave's guilt about an affair that he had with his sister in law and his betrayal of his now dead brother. It's that guilt that keeps him from the children he loves and the place he once called home. But of course this is a ghost story so it's also a tale about how he's haunted by his own doppelgänger, a vision of himself as described by his brother as "a sh*t-eating monster."

Though Henry Wingrave in The Turn of the Screw is not haunted by a terrifying double, the main protagonist of "The Jolly Corner" is. In the 1908 chiller from James a man, Spencer Brydon, who returns to his family home in New York, only to discover the ghost of the man he could have been. Stalking his familial pile in the late nights he becomes obsessed with his double who he sees as a better version of himself, a glimpse at who he might have been had he stayed in the states and pursued the family business. Though it's not the story we see directly adapted in The Haunting of Bly Manor the themes of self, identity, and thinking of what could have been run through both versions of "The Jolly Corner." But while Wingrave wishes to escape his double and the tragic past he represents, Brydon hunts it down looking for solace and absolution in the guise of a ghost who represents the life and career he never pursued.

The Romance of Certain Old Clothes

The Haunting of Bly Manor's biggest mystery--and diversion from the original--comes in episode eight, which quite closely adapts this heartbreaking James story while deftly tying it into Bly and Dani's fate. While for most of the season we think that the Lady in the Lake is Ms. Jessel we learn here that she's actually one of Bly's former residents who is directly tied to all of the ghosts and their unfortunate fate of being trapped within the walls of the stately home. Flanagan's version is another devastating gothic romance which tells of two sisters who love each other deeply, the eldest of whom, Viola (Kate Siegel), is forced to marry in order to protect their home. She's a dynamic and powerful woman who controls the family and her husband but when she gets sick, she loses a grip on her sibling, daughter, and husband leading to tragedy. Killed by her jealous sister who's sick of caring for her elder who has defied doctors to survive a plague-like illness Viola's spirit is trapped in the trunk of treasures that she left for her darling daughter to inherit.

Before she died she made her husband promise to keep the trunk locked and no matter what to protect them for their child. But with her dead the family falls to ruin and her greedy sister decides to open the trunk, unleashing the spirit within who kills her via the clothes inside. That shocking demise and the murder that led to it is taken directly from "The Romance of Certain Old Clothes" though we see our protagonist trapped forever in the lake at Bly when her husband, terrified of what happened to his sister-in-law throws it under the shimmering surface. That action and the knowledge she'll never see her daughter again destroy any humanity left leaving Viola as the faceless lady of the lake, a being driven only by rage and sadness. She's condemned to that fate until Dani invites her into her body and years later takes her place.

"The Beast in the Jungle"

The finale adapts one of James most dread-filled stories about a man convinced something terrible will happen to him. His fear of this catastrophic event means he wastes his life, ignoring the love of the woman at his side. Flanagan subverts that, with Dani and Jamie deciding to live and love harder than ever despite the terrible fate that hangs over their heads.

While we don't see this story adapted, the chef at Bly Manor is named Owen and the family at its core are called the Wingraves, so its impact is still felt.