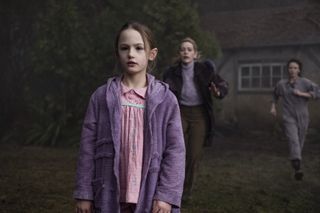 Dani Clayton (Victoria Pedretti) runs toward her daughter as she looks at something presumably spooky. (Image credit: Netflix)

After the rousing success of The Haunting of Hill House, the long-anticipated trailer for The Haunting of Bly Manor has finally arrived. With it comes a brand new release date as well. What was previously known only to be "fall" has now become Friday, October 9th.

Thanks, Netflix! You're right in time for spooky season. Let's check out the trailer.

Yes, there's an appropriate amount of creepy hiding in here. You'll notice a few familiar faces, as well. Victoria Pedretti and Oliver Jackson-Cohen both returned to the sequel series along with Henry Thomas. Don't expect any of them to respond to the Crane family name, though. The Crane's story is finished.

Now, we join what appears to be several new families in what will hopefully be an equally complex, intricate, and loving story as the first. While Netflix has kept the majority of the story's details under wraps, creator Mike Flanagan has a solid track record with these intimate kind of stories.

How many ghosts do you think you'll be able to find upon first viewing?