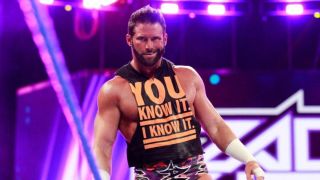 AEW fans got a fun surprise tonight, and it wasn't just in a Warhorse shaped package. While the indie favorite debuted on AEW in one hell of a championship  match against Cody Rhodes, the two found themselves ambushed.

Though Warhorse did his best to ward off the attackers, he wasn't able to hold them off on his own. Though, things ultimately worked out. Fans had been suspecting Matt Cardona would be making his debut on All Elite Wrestling sooner rather than later. Good scouting, marks!

WWE fans will recognize Matt by his ring name Zack Ryder. It appears he'll be sticking with Matt Cardona for his AEW career.

Tune in every Wednesday at 4PM EST on TNT for more AEW action!