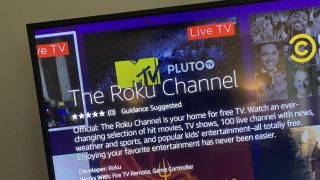 Keep your friends close and your competitors closer. Roku — the No. 1 streaming platform in the United States — just put one of its more important new properties on its biggest competitor.

The Roku Channel is an advertising-supported channel (Roku is more of an ad company now than a hardware company) that has all kinds of content from all kinds of sources. News, sports, series and movies. And it's now available on Amazon Fire TV, which happens to be the No. 2 streaming platform in the United States. (Those spots are reversed outside the U.S.)

Presumably this isn't some sort of sneak attack, and Amazon is fully aware that The Roku Channel is on its platform. (It's also entirely possible that Roku is giving a portion of ad revenue gained from being on Fire TV to Amazon.)

Regardless, it's more free TV for you, and that's a good thing.

Meanwhile, Roku has two new devices on the way — an all-new Roku Ultra, and a new Roku Streambar, which is a small soundbar with Roku built inside. And later this year, Roku is adding Apple's AirPlay 2 and HomeKit to most of its devices.