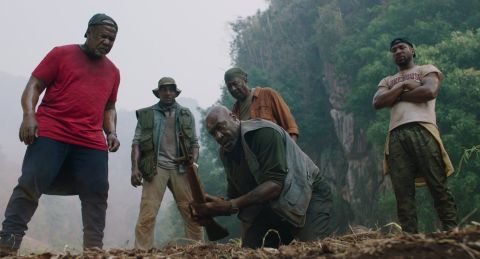 A brilliant Spike Lee joint about Blackness and brotherhood, guilt and gold. It's painful and funny and satisfying.

There are a million reasons why you should watch Da 5 Bloods on Netflix.

The most important reason is one for which I am the least equipped to describe. Da 5 Bloods is, at its core, a Black movie. From the title to the cast to the captions to the credits, unabashedly, and unashamedly. It's about the bond — the kind I see every day here in the Deep South, and you can see all across America, but which I won't (and can't) ever really know.

And that's more important now than anyone could have anticipated, given the state of things in June 2020. The social change we're seeing this summer doesn't make the movie any better or any worse, but it definitely puts the film in a different context. It's a history lesson as much as it is a heist film.

Alongside the racial and cultural bonds are the bonds of war. Specifically, Vietnam. The country is the setting for the movie in the present, the battles of the flashback past, and the ghosts that have haunted in between. And I'm ill-equipped to have any true understanding of that, too.

All the more reason to shut up and watch, I say.

There's a lot going on in Da 5 Bloods . And it's told in a way in which maybe only Spike Lee could tell. It's layered and complex — serious and funny and sad and hilarious and dark and loving. It's a little long at two-and-a-half hours, and two major plot points are telegraphed pretty far in advance, though that didn't make them any less impactful.

And it is, at its core, a heist movie.

"Da Bloods" were a quintet of soldiers in the Vietnam War. Paul, Melvin, Otis, Eddie, and Stormin' Norman. They're played by the following actors, each of who deserves his own damn line in this humble review:

Paul, Melvin, Otis and Eddie made it through the war and into the current day. That's not to say there aren't scars of varying depths — Paul's are the most obvious, but each has his share. Norman died in battle.

Da Bloods are back in Vietnam, reunion-style. They're stoked to see each other catch up, and in many ways it seems like it hasn't been 50-something years since they were in-country. Their guide, Vinh (Johnny Trí Nguyen), isn't crazy about them heading off into the jungle for whatever it is they plan on doing. But there's no talking them out of it.

Their present-day mission is twofold: First is to find the remains of their fallen brother, Stormin' Norman. There may have been five of them, but Norman was what held them together through the battles in the jungle, and when the battles at home cut through the canopy in Southeast Asia. The assassination of the Rev. Dr. Martin Luther King Jr. threatened to upend them all. But Norman got them back on track.

The other half of the mission? Find the millions of dollars worth of gold bars they buried decades ago, liberated from the C-47 they were tasked to defend. It during that mission that Norman was killed.

Before they even get out of the city, though, you can see Paul's on edge — and has been for some time. He's gone full MAGA, much to the dismay of his comrades, who still love him enough to overlook that transgression. The surprise arrival of Paul's adult son, David (the excellent Jonathan Majors) doesn't do anything to calm him, either, and Paul nearly loses it on the boat heading up river. Eddie leans out to buy a sixer of Bud Lite from a floating seller, but Paul can't even look any of the Vietnamese (at least one he isn't paying to lead him to his objective) in the eye. Buying a chicken is out of the question, and the he nearly turns violent when he can't turn the boat-based salesman away.

Paul admits he's having a panic attack (which of course the rest of us already knew), and David tells the group that his father has been having nightmares pretty much forever, and he has PTSD. (Paul disputes that last part, though.)

"I see ghosts, ya'll," Paul tells Da Bloods, who try to make him feel better by saying that they all have problems, too. But Paul's not buying it. "Stormin' Norman comes to me damn near every night. Now he talk to you like he talk to me? I don't think so."

Paul is in trouble, and he has been for some time. Since he left, really.

The foreshadowing is a little too strong when the group stops for the night and hits the bar. David approaches a white woman and is ecstatic to find an American in Vietnam. She's French, though, and laughs at his assumption that blonde means American.

Hedy (Mélanie Thierry) is in Vietnam as the founder and director of LAMB — Love Against Mines and Bombs — a group that disarms landmines and bombs and helps the victims of the munitions that still very much plague that part of the world today. She's making up for her family making its fortune on the backs of the Vietnamese. "It's strange how a war never ends for those involved," she tells David.

The next day, Da Bloods (David is now an honorary member and will get a cut of the gold) head into the jungle. It's tough going. Their minds remember what it takes to make it out there — Paul's never really stopped — but they're not in their 20s anymore. But they have GPS coordinates and the resolve to find the gold and Stormin' Norman's remains, and that's enough. The evening is restless, between concern about Otis' contacts who will launder the gold for a hefty fee, and between Paul seeing things in the jungle. (One of those contacts, by the way, is a war-era sex worker and newly discovered mother to Otis' child.)

There's nothing convenient about having to drop a deuce in the jungle of Vietnam, but David somehow manages to dig his hole precisely where a bar of gold is buried. He goes from barely keeping himself from falling down the hill to dancing the type of dance you dance when you forget about pooping because you've found gold in them there hills. It's a little too perfect, but it does move the story along, which is good because we're not quite halfway through yet. It turns out the gold is spread out along the mountainside, thanks to landslides and the general passage of decades.

They also quickly find the remains of Stormin' Norman, which sobers everyone up pretty quick. Discussion then turns to what everyone's going to do with the money. It was Norman's idea to bury the gold found on the downed CIA plane. It was meant to pay off Vietnamese. "They ask? We say the V.C. got it. If they don't, we come back and get it."

Norman convinces Da Bloods that the gold is rightfully theirs. "Who feel like they're rippin' something off? We was the very first people that died for this red, white and blue." He thing recites a litany of Black men who sacrificed in the early days of the country but whose names you likely never knew. "I say the U.S.A owe us. We built this bitch. ... We repossess this gold for every single Black boot that never made it home. ... We give this gold to our people."

Here is where Spike Lee gives us a brilliant education of Black History that, frankly, I'd never heard. It stands in stark contrast to the present-day footage. Those lessons and the flashbacks give a great deal of depth to the story. These aren't ordinary flashbacks, either. There are no younger versions of the surviving Bloods. The flashback are four aging Vietnam War veterans, and a younger Stormin' Norman, all acting against each other. And it's brilliant, with the aspect ratio changing from an ultra-wide 2.39:1 for the present-day shots, 1.33:1 for the Vietnam War-era flashbacks, and 16:9 once Da Bloods go into the jungle. Eddie also is shooting home movies in Super 8 for some reason, which adds another dimension to what we see on screen.

So they've got the gold, and they've got Norman's remains. Now they have to make it out of the jungle — and they've been followed. And for a bunch of guys who have been out of the war business for decades, they still shoot pretty straight. (Even David, who said he'd never touched a gun before.)

But the back half of the movie really belongs to Paul. Delroy Lindo has always been a force of nature in whatever movie he's in — even the not-great ones — but the pain and anxiety is palpable. He's not talking to us as he makes his way back through the jungle. He's talking to Norman. And Norman talks back to him. Paul's flawed, and he's broken. He's not quite irredeemable, though, as his final letter reveals.

It's not all that hard to guess what Paul's demons really are, but that doesn't lesson their impact any once they're fully revealed. And it's the sacrifice and forgiveness that truly makes up the bonds that we see in Da 5 Bloods . The Blackness. The brotherhood. Spike Lee tells the story masterfully and reminds folks like me that there's so much we just don't know about things, and even then may not ever really be able to understand. Lindo and Whitlock Jr. and Peters and Lewis and Boseman bring it to light in a way we rarely see, if ever.

But even for those of us who are watching from the outside, Da 5 Bloods tells us that those bonds indeed are real, and they're worth defending.

One less-serious spot that's worth highlighting: Isiah Whitlock Jr.'s extended "shiiiiiiiiiiiiiiiiit." Is one for the ages, drawn out impossibly long. It's operatic. It's angelic. It's perfect.

And it sets up the post-credits scene beautifully.