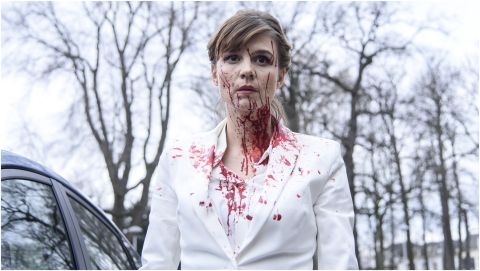 'The Columnist' is a very pretty and sometimes quite fun surface-level look at a serious issue women face on the daily.

Being a woman on the internet is challenging. Being a woman with opinions on the internet? That opens you up to a whole host of terrible things. Death threats, rape threats, doxing… the list kind of just goes on and on. It’s this very subject that Ivo Van Aart’s The Columnist acknowledges.

The story follows author Femke Boot (Katja Herbers) as she works to meet her deadline for her next novel. Her career has featured a whole host of columns, giving her quite the online presence. That online presence was only elevated by her fame as an author, and that’s when the trouble started. In her pieces, Femke tackles everything from frivolous, warm topics, to issues like pollution and global warming. She has a whole world of fans, as made evident by the success of her publications, but the critics scream loud and proud. And the things they scream are just awful.

As she works on her novel, Femke becomes increasingly vexed by these threats and insults. Then her neighbor begins hammering. He’s building a fence, you see. He doesn’t apologize or offer any sort of deadline to when he’ll be done. (Or ask if it's ok that he build a fence between their properties.) Nevermind the fact that Femke works from home and is under a tight deadline. It’s then that the realization comes that her neighbor is one of the men who has been harassing her online. Not only that, but he’s a racist, nationalist creep. Obviously the only reasonable course of action is to kill him, right?

And so, kill him she does. Femke chops off his finger for good measure and goes about her day happily writing with new vigor. As the film progresses she’ll find herself building a better relationship with her daughter and eventually even falling in love. All of this unfolds as she calmly murders her detractors, eventually earning herself the moniker The Middle Finger Killer. It’s all handled in a very run of the mill kind of fashion.

“Acknowledge” was a very conscious word choice in the opening paragraph. The Columnist is aware that women face harassment on the internet, but neither Ivo Van Aart or the film’s writer Daan Windhorst have had to live through the experiences they’re trying to illustrate. The attacks women receive online are represented in a very surface level kind of way. There’s no conversation of the very real fear that comes with the first time some creep hiding behind an anime icon tells you he’s going to find you and rape you for making a disparaging remark about Zack Snyder, GamerGate or whatever the flavor of the week is at the time. The film acknowledges that women have problems but the team behind it lack the life experience to tackle those problems in a meaningful way. The way women are threatened on the daily is reduced to “someone was mean to her on the internet, so she killed them,” and that’s a shame.

What’s left behind is a perfectly serviceable film about a writer who snapped and became a serial killer. That “perfectly serviceable” only becomes frustrating when you consider what it could have been if someone who has had to experience life as a woman on the internet were given the opportunity to be involved.

Outside of that there are plenty of fun kills, some surprisingly sincere interactions, and the final scene ends up being unexpectedly gorgeous. Katja Herbers delivers a great performance as both threatened writer and fearless killer, carrying the film in more ways than on. If you're just looking for a "woman seeks revenge for people being meanies" kind of jam (and there's nothing wrong with that), you'll have a lot of fun with this one.

The Columnist is part of our Fantasia Festival 2020 coverage.