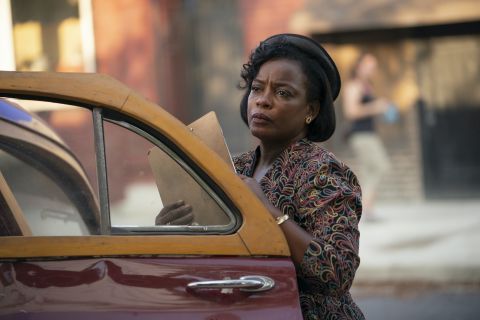 Hippolyta finally gets her story. Unfortunately, it's in the weakest episode of the series.

Last week, we finally met Ji-Ah (Jamie Chung), Atticus’ (Jonathan Majors) complicated lover from Korea. We learned of the horrors that haunt him, and the complicated existence that troubles her. With their story also comes the realization that Ji-Ah saw Tic’s death. I’m taking time to reiterate that in this opening paragraph because “I Am” makes zero reference to the episode that came before it. Though that’s not necessarily unusual, and the previous episode was mostly a flashback, it’s an odd narrative decision to have two stand-alone episodes back-to-back. Both “Meet Me in Daegu” and “I Am” contain critical information about major players in the series, but to have them tie in so little to the overarching story is a peculiar choice this far along in the series.

“I Am” focuses largely on Hippolyta (Aunjanue Ellis). While it may be strange to have two largely stand-alone episodes play right next to one another, some narrative time with this matriarch was long overdue. In her quest to discover what really happened to her late husband, Hippolyta manages to solve the Orery. With that solution comes some coordinates and a whole mess of trouble for both her and her family, but it also comes with long overdue freedom for a woman who has spent her whole life shrinking herself.

The coordinates take Hippolyta to a tower with a machine that has all the makings of something that will happily disrupt the space-time continuum. As it happens, it does just that. As Hippolyta is activating the machine, she’s disrupted by two deputies. Thankfully Leti (Jurnee Smollett) tipped off Tic on his aunt’s whereabouts before she found herself fighting one-on-two with two armed lawmen, but things still go sideways. The machine rips a portal open, to where is unclear. Tic manages to throw one of the deputies into the portal without issue, but Hippolyta shoots the other and is pulled into the portal before anything can be done about it.

It’s here that everything takes a hard left into science fiction.

Some SciFi vibes are expected in Lovecraftian fare. Regrettably, this shift in Lovecraft Country is more jarring than it is interesting. We see some great stuff come out of it by way of Hippolyta’s journey, but none of the science fiction aspects were necessary to that journey, they were just an odd, clunky kind of vehicle for it.

Hippolyta wakes up on a cold table, naked, and presumably on some kind of alien spaceship. She’s confronted by an android woman named Seraphina (Karen LeBlanc), who insists she is not a prisoner there. There’s some confrontation, some panic, and eventually Hippolta asks to be transported to Paris where she can dance with Josephine Baker. And so she is. She embraces all of the beauty that comes with the place, and with it she acknowledges her rage. The rage of making herself small, the rage of being only the kind of Black woman that white people expect her to be, the rage of still being oppressed despite constantly being told that she is free.

I don’t believe we’re meant to know when or where Hippolyta is transported to next. She appears to land in a dessert, surrounded by other warrior women. They’re training, working to please their queen. After Hippolyta goes through her training montage, we learn that they were honing their skills to take on Confederate soldiers. The women eviscerate them. The scene ends with Hippolyta slitting a general’s throat and popping his head off his shoulders as if it were nothing, followed by a warrior’s speech telling her soldiers to embrace the rage that they were told was unladylike. She then proclaims that she is Hippolyta, George’s wife.

Her final destination is the very spot we first met her. Hippoylta wakes up in bed next to George (Courtney B. Vance), where she is able to enjoy a few moments of bliss with her husband. Though, that bliss is short-lived. It’s in this moment that Hippolyta confesses that the world made her small, and while she expected him to see her for all that she was, he made her small too. He helped shrink her so he could have a family, and she let it happen. She is not Hippolyta, George’s wife. She is Hippolyta, discoverer. This revelation takes her and George on a quest throughout space, meeting aliens across the galaxy in classic science fiction inspired costumes that very much fit into the aesthetic of Sun Ra, the American jazz composer known for his cosmic philosophy. The full verse we hear plays out like this:

I’m not real, I’m just like you. You don’t exist in this society. If you did your people wouldn’t be seeking equal rights. You’re not real, if you were you’d have some status among the nations of the world. So we are both myths. I do not come to you as a reality, I come to you as the myth because that is what black people are: myths. I came from a dream that the black man dreamed long ago. I’m actually a presence sent to you by your ancestors. I’m going to be here until I pick out some of you to take back with me

It’s then that Seraphina tells her that her journey is complete, and she may now be fully integrated into their society. Who’s society? Wonderful question. But the bottom line is that Hippoylta chooses to return to Earth. Though the planet cannot contain her in all that she is in the way that it could before, she has a daughter to return to. She chooses D.

It’s a beautiful journey with a lot of distracting, unnecessary frills. And this sentiment comes from both a lover of science fiction and an enjoyer of Lovecraftian tales.

“I Am.” gives some attention to Montrose Freeman’s (Michael Kenneth Williams) story as well. To say that the gay arc in this series has been fumbled is an understatement, but I had hope it would find a way to smooth itself out in the end. Lovecraft Country doesn’t fluff up the period it takes place in. The rampant homophobia is as expected as the flagrant racism, but choosing to root it all in the abusive Montrose manages to add some unneeded insult to injury. Showing Tic’s reaction as so aghast made a complicated character even moreso, but it was also an added dash of unnecessary to a part of the story that was already handled so haphazardly. In this episode, it appears that Tic’s fury may be more rooted in the abuse his father doled out in order to ensure he wasn’t’ “soft” than actual homophobia, but he still elected to throw a certain “F’ word into the conversation. All of this is to say that the gay narrative still isn’t being handled well, but there could be a glimmer of hope before it’s all said and done.

The last thing we need to discuss is Leti’s little situation. “I Am.” spends any time she’s on screen making it clear that she’s pregnant, a story decision I very much hope turns out to be a fake out. There are so many threads, so much going on, and so much more to Leti Lewis than a character who needs to be shoehorned into an unwanted pregnancy. Lovecraft Country has done well by its women. I’d hate to see all that thrown away in favor of a plot device used solely to try and calm Tic’s desire for answers and throwing himself into dangerous situations.

By the end, we discover that Tic also seems to have been thrown into the portal, or at least ends up with an added souvenir (a copy of the Lovecraft Country novel). But there’s no time to explore that in “I Am.” As soon as we catch back up with him, we hear sirens in the distance. Casual reminder that there’s a murdered cop on the floor, so it’s time for our complicated protagonist to make a fast exit. Unfortunately, in Tic’s haste to make an escape, he doesn’t notice D’s (Jada Harris) comic tucked under the corpse. That’ll all be explored next week! Hopefully, with only three episodes left to go, we can get back to the series’ main plot.