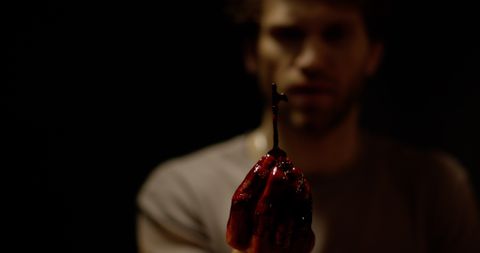 'No Escape' splices together Insta-famous commentaries and escape room peril to generate content that's maybe not the most ingenious hybrid take, but still rife with tension and terrors.

In No Escape, concepts of reality versus make-believe create a hybrid horror story rooted in two mediums. Escape rooms are the obvious make-believe, as contestants find themselves battling anxiety while deciphering cryptic puzzles in a locked area. Vlogger culture is the more hush-hush imaginary element, in the way reality shows are often scripted and architected behind-the-scenes. Together, through this WiFi’ed chamber of secrets, writer/director Will Wernick exploits the falsities of authenticity as our digital society has deemed appropriate by pranking the pranksters, so to say.

Whether that means dead bodies will remain corpses or not is the film’s testament to in-conflict theatrics, which are always ambiguous where, say, Escape Room is straight attraction-doomed horror.

Cole (Keegan Allen) is celebrating the 10th anniversary of his video channel, #EscapeRealLife. To celebrate the milestone, party-boy partner Dash (George Janko) books Cole and his crew an exclusive Russian escape room experience customized for every guest, no repetition. It’s the ultimate dare, and to seal the deal, the company has agreed to livestream everything directly on Cole’s channel. Along for the ride are girlfriend Erin (Holland Roden), best-friend Thomas (Denzel Whitaker), and X-Games talent Sam (Siya). Tourists in a foreign land, trusting an off-the-grid escape room that’s touted as the ultimate thrill seeker’s challenge. What could go wrong?

Wernick’s familiarity with escape room cinema is rich, given his last project was a film titled Escape Room. No, not 2019’s Escape Room starring Taylor Russell and Logan Miller. An indie, more budgeted version released under-the-radar in 2017. Wernick’s understanding of escape rooms translates into a genuine amusement puzzler aesthetic, which grounds his more complicated storyline in gameplay and monitored challenges turned horror-flick dangerous. Naive contestants downplay their imprisonment, muck about until one of their tasks inflicts actual pain, then paranoia begins to fuel their more frantic reactions as levels increase difficulty—nothing uncharted, but Wenick’s comfortable in these waters.

As a social media commentary, the hybrid approach impresses more than expected. Cole attains stardom by playing himself, an exaggerated version, for hordes of followers who believe they’re getting the real Cole. Dropping cringe worthy sign-offs and spouting internet jargon that Thomas mocks once the cameras stop recording. Erin pleads for alone time in Russia, but even when they find a quaint rustic eatery, nestled away for intimacy, Cole still ruins the moment by insulting the locals “in character” on his way out the door. Now Cole, who’s happily putting up a performance facade, waltzes into a boobytrapped gulag that he believes to be one thing (safe), which is indeed not what it seems (dangerous). What Wernick’s narrative forces, what Dash’s contact Alexi (Ronen Rubinstein) curates, reveals the “true” Cole to public viewership. In the end, Cole’s behaviors equate to something vastly viler than his intentions can grasp.

In terms of gore, No Escape saves its gruesomeness for a few bloody highlights. Specifically recalling Cole’s digging through a fresh cadaver as a direct callback to Amanda’s key extraction in Saw (cutting between Cole and the motionless body for effect), then another arm removal like out of Hostel. Otherwise, traps merely tease their hazards. Whether it’s Thomas stuck in a hanging rack, or Dash staring down the spikes of an Iron Maiden, or Sam’s electric chair. Betrayals and Russian gangsters and unwinnable scenarios all intensify a second and third act that resemble more “torture porn” blueprints because that’s where the horrors therein exist. Once the game becomes an actual deathtrap, pulled curtains reveal madmen behind the controls.

No Escape never redefines a subgenre of entertainment-based horrors, but Jason Goodell’s smooth cinematography and steady performances across the cast elevate when necessary. Will Wernick isn’t dealing in subtle metaphors, but his message propels an eerily unsettling dress-down of faux realism cultures. About how we want to believe what we see, so very desperately, and the marketability of portraying someone else’s fantasy. That, plus an escape room nightmare with gouged eyes, scarred thugs who relish their on-camera butchery, and an expected yet albeit devastating reveal which turns the lens on voyeuristic tendencies that drive only the most extreme content at any cost.

No Escape will be available on VOD September 18th.