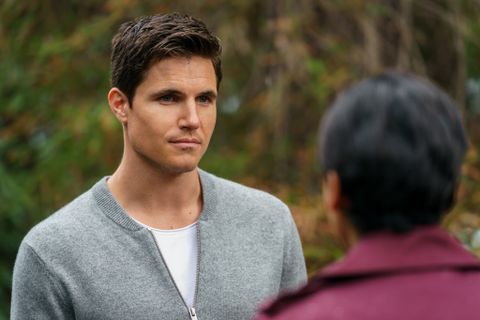 It's "Idiocracy" meets "The Matrix" in an afterlife where brands rein supreme, in-app upgrades are very much still a thing, and there's a bit of a whodunit to solve.

Suspend, if you will, the idea that maybe everlasting life isn't necessarily the best idea. That trope is well-covered any number of ways. Instead, Amazon's Upload explores the idea that we escape death by uploading ourselves to a chosen digital afterlife. It's not a function of any sort of judgment day — it's just an option, if you're willing an able to afford it in this futuristic society.

If you want to keep on living, and do so in a way in which you can still interact with those who have yet to shuffle off this mortal coil, you can. And the more money you have (erm, had), the better your posthumous experience can be.

Upload is the brainchild of Greg Daniels — the other half of the team behind The Office and Parks and Recreation not named Michael Schur. Schur, of course, is the force behind The Good Place , which also explores the idea of life after death. But whereas The Good Place does so with a firm grasp on the ethics of determining whether you go to Heaven or Hell, Upload is decidedly more absurd, except for when it's not.

Nathan (Robbie Amell) is dead. He maybe didn't have to be, but for some dumb reason his smart, driverless car ran straight into the back of an illegally parked truck, ignoring all commands to, ya know, not do that. It's exactly the sort of nightmare you'd think of if you tried to marry futuristic drive tech with the first iteration of Alexa.

Our hero is whisked to the hospital, where he's not-quite given a choice: Surgery, with the potential to live or die in the real world, or Upload, which transfers his consciousness and memories to a digital afterlife, from which he can live on with other Uploads, and still interact with family and friends back in the real world.

Nathan's awful (and awfully rich) girlfriend Ingrid (Allegra) doesn't give him much of a choice. She wants total control over Nathan, so it's off to the Upload scanner. (Which is a little less of a scanner and more of a digital guillotine, apparently.)

Nathan awakens in Lakeview — the premier digital afterlife. It's posh, so long as you don't mind a sort of Overlook Hotel sort of vibe. It's also expensive as hell. Tens of thousands of dollars a day isn't out of the question, with opportunities for in-experience purchases at every turn, and spirit-crushing branding that essentially follows your spirit. Think of an excellent but incredibly spammy app, only now it's your life. That's Lakeview.

Nathan awakens to the sound of an "Angel" — Nora (Andy Allo). She's less of an actual angel and actually a customer service rep for Horizen, which owns Lakeview. The afterlife is a business, first and foremost.

What happens from here is ... busy. There's a lot to see and learn, and we're learning it right alongside Nathan. A lot of it is bordering on slapstick. We're learning about Nathan, too. Is he an asshole? Is he a good guy? Why are some of his memories missing? How long can he put up with this idyllic hellscape? Is Ingrid going to be this awful all the time? Is he (obviously) going to fall in love with Nora, and how badly will that end?

Those questions are all tucked inside a world that's right out of Matt Groening's Idiocracy , meaning that it's very much a commentary and continuation of today's absurd society, with megamergers controlling even more than what they do now. (GoogleSamsung, anyone? Or how about PaneraFacebook?) Much of it is steeped in tech culture, right down to the Dumbo, Brooklyn, offices of Horizon, which could be any hipster tech company today.

But there's also one other question that finally begins to more the story forward: Did Nathan really die in a tragic self-driving accident? Of course, that we're even asking that question pretty. Much answers it for you. And Nora, in addition to becoming Nathan's new best friend and digital love interest, is on the case.

Upload is a fun watch, but it's a very uneven watch. It quickly flips from being not all that funny — silly, really — to serious. It's as if everyone involved couldn't get The Good Place out of their heads. There are no cries of "Holy forking shirttails!" here. F-bombs are all over the place, which is fine. (Just know that this ain't a show for the kids.) There's a fair amount of sex, but not a lot of nudity, which I mention only because of the great pains she show appears to take to avoid nipples — only to rush into them headfirst in a weirdly uncomfortable (but also extremely funny) gender-bending moment involving a young boy, a tattoo, and a nightly reboot. Something just seemed off about Nathan's strategically placed hands while he was having sex with Ingrid in the car pre-accident, and obviously cropped shots of Nora and a hookup. That's a production complaint, though, and not really one for the story.

And one more along the production lines is that the obvious (yet understandable) use of green screens to create the Upload future often distracts more than it adds to the experience. Things like having your phone built into a Fitbit-like wristband, with video calls appearing between your thumb and index finger, work surprisingly well. But backgrounds and other set pieces make you think of budget constraints more than futuristic features.

Once you cut through the silliness, though, it's the relationship built between the lonely Nora and the displaced Nathan that stands out. Andy Allo is excellent, and for those of us of a certain age it reminds of the early days of the internet, in which we had to begin to understand online relationships, and how they could simultaneously be real and not. It's touching, even though you know it's going have some pretty major hiccups.

Upload is fun, and usually pretty funny, with some great one-liners and retorts. It's mostly well-acted. Just know that the trailer makes it seem tighter and more serious than the viewing experience turns out to be.

And 10 episodes in, we finally start to get some resolution, even as the story really is just laying ground to get to the second season. And that's fine. This is mostly an easy, mindless watch, and there are a million directions it can go.

Let's just hope it doesn't take quite as long to find that direction in Season 2.