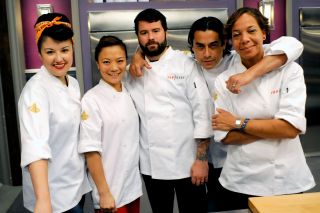 Like many of us, I began my pandemic life with grand aspirations of self-betterment. After a short adjustment period to our new normal, my wife and I decided that the COVID-19 outbreak would be an opportunity to catch up on decades’ worth of old television shows. We picked Shawn Ryan’s The Shield, a television show that had been on our radar for years, to kick things off. It was rich, complex, and promised months of entertainment to keep us preoccupied.

Then a funny thing happened – a few weeks into our first-time watch, we found ourselves taking small breaks to watch one-off episodes of cooking shows. By mid-June, we had abandoned our prestigious television shows entirely in favor of Bravo’s Top Chef, a series that married one thing I rarely enjoy (reality shows) with another thing I’m terrible at in real life (cooking).

But four-plus seasons (and counting) later, I’ve come to realize something: Top Chef is the closest I’ve come to self-care during quarantine.

My wife always wanted to marry a foodie. Instead, she married me. I’m the one guy who grew up in Southeast Alaska and hated most types of seafood. I will pop onto my soapbox at a moment’s notice about the unsatisfying portions at tapas-style restaurants. I once went to Le Bernardin, Éric Ripert’s famous New York-based French restaurant, and spent ten minutes trying to figure out the weird glaze on my entrée. It turned out that the meal had accidentally been served in plastic wrap - that fact alone sure seemed like the universe trying to tell me something about my relationship to fine dining.

On paper, then, I’m the worst candidate to fall in love with Top Chef. Bravo’s long-running reality cooking competition has been a fixture of the foodie scene since 2006; since then, the show has become a proving ground for future James Beard Award-winning culinary professionals. Each season, a new group of sous chefs, executive chefs, and restaurateurs from across the world gather to take on weeks of quick-fire challenges and complex eliminations. Under the watchful eye of host Padma Lakshmi and head judge Tom Colicchio, the field is narrowed (“Please pack your knives and go”) until only one contestant remains.

Like all reality television, there’s comfort in Top Chef’s formula. Once you get past the initial chaos of a dozen-plus contestants, you begin to place people into boxes based on their experience and proficiency. Here is the chef who adds unnecessary complexity to each of their challenges; here is the one who filters every ingredient through their brand of regional or national cuisine. Patterns beget preferences, and preferences make it easy to know which contestants will make a deep run into the season. By the time Restaurant Wars rolls around - a mid-season elimination challenge that asks two groups of contestants to create a pop-up dining establishment – you’ve already emotionally imprinted on a handful of serious competitors.

Top Chef also teaches you that the restaurant world is smaller than it seems. Los Angeles, New York, and Chicago dominate the conversation, and as such, the path to Top Chef takes many contestants through a handful of well-known restaurants and chains. You quickly learn which judges you love – Gail Simmons for her curiosity, Hugh Acheson for his, uh, candor – and which restauranteurs have an outsized impact on each marketplace. As the seasons blend together, past contestants pop up as judges or local experts, giving Top Chef an almost collegiate flair. Over time, you begin to understand the regional influences that go into each community and understand what it takes to stand out from the crowd.

The result is an increased appreciation for the art of cooking. In a typical year, the impact of Top Chef would be that it has inspired me to rethink my relationship with food. Our library shelf is now littered with cookbooks from former Top Chef contestants; each weekend, my wife and I try to tackle a particularly complicated recipe from a personal favorite. We have also taken to creating lists of Top Chef restaurants in different cities, opening the door to food tourism in a way that I would never have considered before. Would I plan a weekend getaway to New Orleans so that I could stake a spot at Season 11 contestant Nina Compton’s Compère Lapin? Six months ago, the answer would have been no, but now I find myself organizing future trips in my head around the restaurants I want to visit first. That couldn’t be more different from how I used to think about travel.

But watching Top Chef in 2020 comes with a unique cost. As each season unfolds, my wife and I find ourselves Googling countless restaurants, only to encounter dozens of different COVID-19 warnings. Some are temporarily closed. Many are permanently closed. And for those that remain open, I find myself evaluating some contestants all over again. Which restaurants seem to emphasize employee and customer safety? Which executive chefs are transparent in their struggles, and who appears to be sticking their head in the sand and hoping this will all go away? Top Chef has put a face to the restaurant industry, but given that some estimates suggest that 80% of American restaurants will not survive the COVID-19 pandemic, that human element has suddenly become more critical than ever.

More than anything, Top Chef has become a conduit to appreciate better an industry that is struggling and the people who are struggling to keep their shops afloat. Following chefs on social media and reading their interviews have taught me how some former contestants are working hard to raise the profile of chefs of color in the wake of Bon Appétit’s discrimination scandal. Or how some are working behind-the-scenes to secure Congressional funds for struggling restaurants. Some Top Chef participants have launched video series teaching people how to make sustainable and environmentally friendly dishes at home. And all of them are engaged in an uphill battle to promote, celebrate, and console the other members of their community as they navigate the ongoing uncertainty of COVID-19.

This, to me, is self-care. Nobody is more excited about my newfound foodie energy than my wife, but we have translated that energy into supporting local restaurants, fundraisers, or even the occasional mail-order delivery from an out-of-town favorite. Finding ways to escape the moment is great, but pure escapism can only last so long. Eventually, I need to feel like I’m making an impact, and knowing where to put our dollars – locally and otherwise – to do the most amount of good is one of the few small acts of control we have left. So here’s to Top Chef and the hundreds of restaurants it has spawned. May I one day have the opportunity to eat at you all.