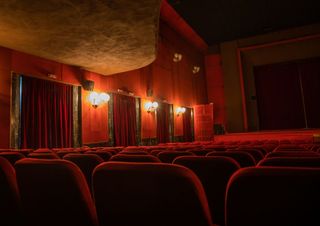 Today, AMC and Universal announced an incredible new partnership between the two companies. Said companies went rounds earlier in the year over a dispute about theatrical windows and the complicated digital release of Trolls World Tour. Now, months later, they’ve announced a historic new deal that shortens the theatrical window from 90 days to a measly 17. The exact terms of that deal have been kept private, but for now the detail we need to know is that 17-day (or three-weekend) figure.

First, let’s talk about why those 90 days matter! Theaters and studios have (up until today) had an agreement that all theatrical releases must have a 90-day window before going to physical or digital release. It’s basically an exclusionary clause that ensures people have a reason to turn up to theaters to see movies.

From the perspective of a film critic and theater-lover, absolutely not. Because here’s the thing about this little profit share announcement between one of the biggest theater chains in the world and a major studio: they’re both covered. The deal undoubtedly ensures it. The other major chains will find ways to survive as well, as they always have.

But what about smaller theaters? What about the small-town single-screen that’s some of the only culture folks have access to in their area? What about the mom-and-pop shops who have fought through the digitization of their projectors and raising prices that they only see a fraction of but still get blamed for? Art houses and smaller chains fall under this category, too. Every single one of these locations now find themselves at risk due to the theatrical window being truncated to nothing.

Ok, fine. It’s bad for theaters. But it’s good for me, right?

Depends on who you ask. Even our team here is split. But, for my money, no it’s not. Will the general consumer who doesn’t care about cinematic experience be able to stream movies at home much faster? Absolutely. And, if that’s how you like to ingest your media there is absolutely nothing wrong with it.

But let’s say you’re not one of those people. This isn't just a problem for folks who frequent arthouse theaters or waits until something gets a screening at their local Alamo Drafthouse so they don't have to spend an evening surrounded by folks on their phones. It also effects anyone who loves going to the movies. Because your options of where you see those movies are about to get a lot smaller.

At the end of the day, all this new deal is is a killing blow to small business.

No, that’s capitalism. This deal wasn’t struck for the consumer. This deal was struck to form a profit share between two of the biggest corporations in entertainment. Theaters often get painted as the bad guy, but the two biggest areas they’re blamed for are not areas within their control.

The first is ticket prices. Just a quick fun fact, movie theaters see less than half of ticket sales. You like your theaters fancy? That’s why you’re paying twenty bucks a pop. Don’t even ask what those movie screens cost. You would die every time you see a child hurl a gummy bear at them.

The next is concessions, which is a direct result of the aforementioned ticket percentages. Your snacks are inflated because every theater, even the big guys, is constantly struggling to stay alive. Maybe all of them shouldn’t! Actually, scratch that — there are plenty of theater chains that could shut down tomorrow and while it would be sad for those that lost their jobs it would be absolutely fine for the art of cinema.

But those chains aren’t who this new deal is going to kill. So, no. Not progress. Just money.

Alright, so what about the people that this could help?

This is a fair question! Movies cost money, not everyone is physically able to make it out to theaters, etc. So, on the face of things, this should be good for them, right? My simple answer there is that we just don’t know yet. The details of this deal are under wraps, but I’m willing to guess that those quick rentals immediately after that short window are going to stay in that twenty-dollar range. So, the conclusion here is a very wishy-washy “it depends on your circumstance and what details emerge later, but I don't have confidence in corporations looking out for you.”

Wait until it’s safe to go outside again and then go support your local theaters like crazy if you've agreed with a single thing I've said here. It’s always been hard for them, but this deal makes it downright impossible. Yes, you will pay a couple of dollars more. But you can pay into AMC’s new profit share or you can help support art appreciation for a few bucks more. It all kind of boils down to what’s important to you and what your individual circumstances are.