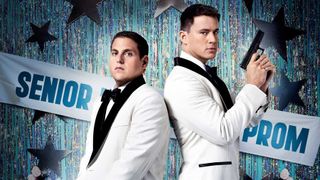 “Smart stupidity” became a parti arrived at a time when Judd Apatow’s coterie of twenty-something comedians began breaking out and away from their showcase roles in his films and attempted to explore opportunities outside of his - and possibly their own - wheelhouse. Though none of them were immediately suited for, or maybe would try to settle into, action-oriented projects, Seth Rogen and Jonah Hill tried venturing towards that territory with mixed success. They also tested their mettle on intellectual properties that it seemed no one would care if they revived, with Rogen’s  Your Mother and then on their adaptation of Cloudy With a Chance of Meatballs, when they agreed to direct an R-rated update of the television series 21 Jump Street.

Eight years, one sequel, and feverish anticipation for anything they lend their midas touch later, 21 Jump Street remains a standard-bearer for action comedies, buddy cop movies, and big-screen updates all in one. While so many similar films recede into obscurity or otherwise lose their edge, 21 and 22 Jump Street seem to have anticipated an advancing wave where multiple layers of humor is not just a virtue but a necessity to keep audiences engaged as the same storytelling tropes are explored by filmmakers to diminishing interest by moviegoers. A new release on 4K UHD offers not only upgraded picture and sound but a renewed opportunity to examine their enduring merits.

Released in 2012, 21 Jump Street arrived at a time when Judd Apatow’s coterie of twentysomething comedians began breaking out and away from their showcase roles in his films and attempted to explore opportunities outside of his - and possibly their own - wheelhouse. Though none of them were immediately suited for, or maybe would try to settle into, action-oriented projects, Seth Rogen and Jonah Hill tried venturing towards that territory with mixed success. They also tested their mettle on intellectual properties that it seemed no one would care if they revived, with Rogen’s Green Hornet and then Hill with Jump Street. The goal seemed to be to evoke the idea of the original show but not worry much about preserving some sense of integrity with its world or characters; moreover, they both were probably better known from the talent that emerged from their spaces than the storytelling accomplished within it.

Hill, working with Michael Bacall, created an extremely smart and self-aware take on a show about young cops going undercover in high school, a notion that seemed much sillier after the 1970s and ‘80s when twentysomething actors regularly played teens without much concern for how out of place they looked among pimply adolescents. Casting up-and-comer Channing Tatum as Hill’s on screen partner gave them both a more conventional physical lead for action-oriented material and a new opportunity to mercilessly ridicule the idea that these cops look anything like teenagers. Lord and Miller cemented this wry, clear-eyed approach with their direction, which enlisted a veritable who’s who of comedians to react - often in the moment - to scenarios that strained credulity, and then more crucially by injecting those reactions into the mechanics of the storytelling itself.

Hill’s script plays like an act of wish fulfillment for Schmidt (Hill) and Jenko (Tatum) when they go back to the cliques and insecurities of high school - theoretically the chance for them to right past wrongs and utilize their life experience to make the experience better socially, and hopefully professionally. But not only is high school dramatically different ten years after graduation, with the socially-conscious overachievers at the top of the food chain, but they each get thrust into the other’s previous role when the two cops accidentally swap identities on the first day: Jenko winds up hanging out trading movie references with the science nerds, while Schmidt attracts the attention of a sharp, independent classmate (Brie Larson, just moments away from superstardom) in classes for cool kids.

Suffice it to say that any portrayal of cops in 2020 feels different than it did even eight years ago, but their general bumbling notwithstanding, I’d argue that neither film especially believes that these characters are good at being police officers. Moreover, in 21 Jump Street, the school principal more or less admits at the outset that the engine driving the plot isn’t really important: “a kid died the other day from drugs, and nobody including me is doing anything about it.” The goal isn’t to tap into actual social ills or uncover real ideas about high school hierarchies. Rather, Lord and Miller use all of those elements, the stuff of a thousand action movies that came before theirs, to illustrate relatable, even affecting ideas about the two characters at the center of their story.

22 Jump Street doubles down on this idea, dismantling layer after layer of convention while recognizing the difficulty of, well, trying to duplicate the success of an earlier film without simply repeating its plot. Captain Dickson (Ice Cube), already commenting on his own presence within the story as an Angry Black Police Chief, instructs Schmidt and Jenko to literally do the same thing they did the first time; ditto Chief Hardy (Nick Offerman), who in the first film breaks down the seeming desperation of “reviving an old formula for a new generation,” and in the second, highlights both the increased financial resources that come with a surprise hit, and also the likelihood for failure. Decades of storytelling tropes have been baked into moviegoers’ heads, and whether this dialogue plays as a surface-level joke or a commentary on the film itself, Lord and Miller’s touch is light enough that to avoid derailing their film with self-awareness.

While dealing with the challenge of creating a story that does not quite unfold the exact same way, and yet adheres to a different but just as familiar blueprint of teen-movie storytelling (21 ends with the prom, 22 with Spring Break, for example), Lord and Miller find a new way to develop the relationship between Schmidt and Jenko that also deconstructs the inherently romantic, even homoerotic nature of partner relationships in cop movies. The way that the two characters discuss their partnership sounds explicitly like a romantic relationship, and it’s threatened after Jenko has a hilariously, graphically overstated “meet-cute” - that most clichéd of introductions - with Zook (Wyatt Russell, another rising star they help incalculably prepare for bigger success). But the filmmakers make two extremely important decisions in depicting that emotional dimension, and the labeling of their partnership: what’s made fun of is the lack of recognition that what they’re going through is effectively identical to the rhythms of a cisgender relationship, while allowing the actual emotionality of that to aid and amplify the story.

Not only does the film make a point to call out homophobia, but it validates the notion that these two characters derive a real sense of emotional support, even completeness, from the other. It feels like an important display of growth from an ‘80s heyday where slurs were tossed around casually - an admission that as funny as those films may have been, some of their easiest punch lines could have been the most harmful. But equally important is the film’s shift away from a particular sort of romantic fulfillment as closure or growth from the beginning of character’s journey, to a more subtle suggestion that same-sex friendships can be genuinely important and valuable rather than a stopgap for more conventional romantic alternatives.

Revisiting the films for the first time in a few years, I was mildly concerned that their appetite for goofy humor might leave them out of step with changes in the way we receive it now, or that another six years later, their acknowledgment of genre tropes that have since been perpetuated in other franchises might undercut the effectiveness of their storytelling. But I’m especially pleased to discover that Lord and Miller’s instincts were as spot-on here as they were in their other projects, tackling the conventions and familiar ideas within their subject matter without undercutting the entertainment value of simply delivering them well-done.

Ultimately, 21 and 22 Jump Street break down action comedies, buddy movies, teen movies, even just the basic elements of relationships that, romantic or not - funny or not - are universal and relatable to most people. So while ordinarily it might seem like a bad idea to prognosticate the longevity of a film or franchise given shifts in commercial appetites or the formulas to which audiences respond, Lord and Miller have happened upon an approach, not just here but in all of their films, that feels genuinely timeless, even when the mechanics they’re using seem to be deceptively specific.