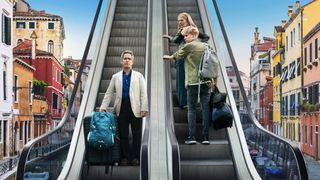 Douglas Peterson is floored when his wife Connie tells him that she wants to leave after nearly 25 years of marriage in BBC1’s new four-part drama Us, adapted from David Nicholls’ novel of the same name.

When Douglas Petersen’s wife Connie turns to him in the middle of the night and announces she’s thinking of leaving their two-decades long marriage, his orderly existence is thrown into uncharted emotional territory. Connie (Luther’s Saskia Reeves) longs for a new life on her own, to have adventures and pursue her dreams of becoming an artist. But her strait-laced scientist husband Douglas (Rev’s Tom Hollander) is blindsided by Connie’s announcement, especially as they have a long-planned and expensive holiday planned.

So the estranged couple embark on their three week ‘holiday of a lifetime’ touring Europe with teenage son Albie (Doctor Foster’s Tom Taylor) in tow. Douglas resolves to change his fuddy-duddy ways and win his wife back. But his mission doesn’t quite go to plan!

Here, The Night Manager star Tom Hollander tells us more about Us.

Us on BBC: Tom Hollander on why should we watch BBC comedy drama Us

Tom finds the shows down-to-earth feel very refreshing. “What’s so good about Us is that it feels very true. There isn’t a great crime or scandalous betrayal. It’s worse than that because it’s so normal!” he says. “Lots of people want their life to have other chapters. Connie isn’t happy. It's an act of courage that she’s disrupting a perfectly satisfactory existence, which in a way, she should be happy with. It’s an honest depiction of how things sometimes go wrong.”

Us on BBC: Tom Hollander on what British biochemist Douglas is like

“Douglas is quite annoying. Yes, he’s funny, but he’s a bit of a control freak — a laminated paper person and a helicopter parent!” laughs Tom of his biochemist character. “It could have been a story in which two people put up with each other and then spend the rest of their lives looking out the window wondering, 'What if.' But this is one where Connie isn’t happy with 'What if.' It’s an act of courage on her part that she’s disrupting a perfectly satisfactory existence."

Us on BBC: Tom Hollander reveals importance of flashbacks in the drama

The series flashes back to 24 years earlier when logical Douglas and free-spirited Connie first fell in love. Younger versions of the couple are played by Iain De Caestecker (the original Adam Barlow in Coronation Street) and Gina Bramhill (Brief Encounters).

"The flashbacks are very important, and Gina and Ian are brilliant in them. You see the journey these two people have gone on, who they were, who they’ve become, and how what was right for them once, isn’t now,” reveals Tom. "Their past is refreshing, charming and has the energy of people falling in love, which is very different to the energy of the contemporary story."

US on BBC: Tom Hollander reveals if he thinks Douglas can win Connie back

Douglas spots a chance for reconciliation Douglas when Connie suggests they spend one last summer together as a family. In the opening episode on BBC1 on Sunday 20 September the couple embark on a three week ‘holiday of a lifetime’ touring Europe with teenage son Albie (Doctor Foster’s  Tom Taylor), who’d rather be traveling with anyone other than his parents.

"They go on an odyssey around Europe — and it turns into the holiday from hell!" laughs Tom. "But, ultimately, it’s a story of hope."

When and where can Tom Hollander's Us be watched?

Us will start on BBC1 at 9 p.m. starting Sunday, Sept. 20. All four episodes will be available on BBCiPlayer from that date.