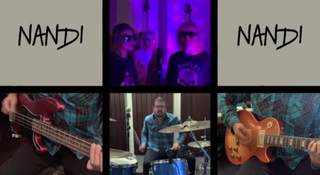 For those who haven't been following the saga, the young drummer prodigy Nandi Bushell challenged Foo Fighters front man Dave Grohl to a Drum Battle back in the beginning of September. Today, Grohl confirmed Bushell the winner of round 1 and offered an epic new song as retaliation. But first, let's check out Nandi's killer rendition of "Them Crooked Vultures."

Alright, Nandi. You have our attention. Kid's got more skill in her pinky than most of us will build up to in our whole lives, so Dave Grohl was forced to concede. The show, and the battle, must go on though. Today, Grohl retaliated with a new original song after noting that every superhero needs a theme song.

He teamed up with the Grohlettes (his adorable kids) to sing all about young hero Nandi Bushell.

In a world where the news is all bad, it's nice to sit back and watch something genuinely good every once and a while. Nandi has already issued her acceptance of the challenge. Long live this wholesome rock battle!