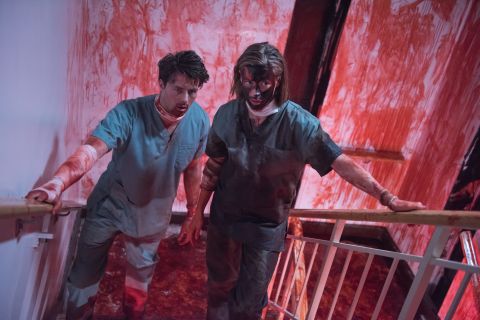 'Alive' succeeds in its simplicity, as patients must outwit a doctor who holds all the cards - and their well-being - in his quick-to-cut hands.

Rob Grant's Alive took even me, the "100 horror reviews a year" guy, by surprise. Such a monstrously different beast from last year's breakout Harpoon (also directed by Grant), jettisoning comedy for body horror nastiness. This distant sister-watch to Tyler MacIntyre's Patchwork deserves the attention I do not see on my social media feeds. A twisted little punch of rehabilitation terror about characters who assume they're in danger, without the implicating data to support their paranoias.

A male patient (Thomas Cocquerel) regains consciousness on a gurney, his surroundings dilapidated and unfamiliar. Next to him is a woman (Camille Stopps), in the same confounded and bandaged condition. They're both covered in wounds, without answers, and growing uneasy. That's when their chief physician (Angus Macfadyen) enters the room, speaking of a road to recovery without ever revealing how either man or woman ended up in some abandoned building surrounded by barbed wire, no other souls in sight. What's going on, who are the patients, and why won't their caretaker allow them to leave?

Writers Chuck McCue and Jules Vincent aren't rewriting Dr. Frankenstein's notebook with Angus MacFadyen's one-mutilator show, hosted by an eccentric operator who commits himself to his craft and pushes patients well past their comfort zones or pain thresholds. "The Man" and "The Woman" (names moving forward) are prisoners, MacFayden's frustrated overseer their captor. It's not exactly a new concept to behold, as "The Man" spends his first scene dragging himself across the makeshift hospital floor trailing juices, but what's further revealed is tightly stitched together. Our perception is simple: a disgraced or crazed surgery expert experiments on innocent victims. Whether that's true or not, if there are layered motivations, is nailed upon the payoff.

With only three characters, Alive is indeed a character piece. Thomas Cocquerel and Camille Stopps draw from hopelessness where escape isn't an option while connected to lifesaving tubes. As their memories come flashing back, revealing burglary attacks and glimpses of their past lives, uncertainty bubbles since violence is a common thread. Angus Macfadyen must make us believe two simultaneous constants: his doctor is indeed a maniac chop-shop medic, or he's genuinely helping two patients in the direst of circumstances. Cocquerel's performance favors one of disdain, aggression, and pushback as the actor conveys hardened distrust through glares, while Stopps urges her roommate to play along, whimpering her complacency. All the while, Macfadyen ensures no truth ever altogether makes sense, ranging from his punishments through paralyzing poisons to generous offerings of herbal meal slops to promote strength buildup.

Of course, what would an illegitimate slice-and-sew midnighter like Alive be without insides-out gore? I'll be honest, there are scenes of bandages peeling from sticky, infected patches that are quite revolting, and that's just an introduction. As Macfadyen forces stress on his recovering subjects' joints and limbs, you can hear seams burst as redness colors their white bandages to convey the reopening of once-closed incision points. Grant achieves a level of gnarliness cranked even higher once "The Man" and "The Woman" start dashing through a labyrinth of freezers, corpse hallways, and discarded human leftovers that decorate Macfayden's workshop. A feast fit for Leatherface, some might say. A buffet of brutality that's painfully inflicted through visual tortures and shelves lined with "spare parts." I feel icky and fearful of hospitals. That's a good thing.

Alive isn't without its reliance on clichés or suspensions of beliefs (within horror movie contexts), some predictable distractions that allow escapees to flee via clouded judgment. Operations are a source of fear in all of us, leading to our aversions of anything dangerously medical. Rob Grant incites those very rational anxieties with visions of weakened persons unable to fight back against the man with the scalpel and power, all while dissecting a story that closes on a shocking diagnosis. One that should cause discussion and commotion as the credits roll, which is a testament to being thrown off guard by a narrative that's otherwise familiar with its sinister scientific undertones or mortician's decor.