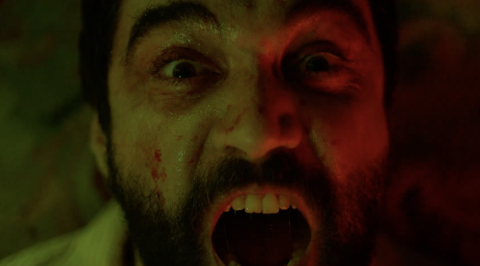 Amulet is impressive in bursts, but too backloaded and sloppy with its narrative to allow style a pass over lacking substance.

"Divisive" is the buzzword being used to describe Romola Garai's Amulet, and "divisive" it sure as Satan's pitchfork is. There are ambitions here that remind of descending into Rob Zombie's third act in The Lords Of Salem or tumbling down Can Evrenol's staircase into the underworld throughout Baskin. For those who may not have seen either, quick translation: stuff gets weird, then weirder.Â

Garai intends to cut between different timelines, to tease familiar haunted blueprints that she no sooner wads and trashes, then unleash "feminist horror" angles (to quote producer Matthew James Wilkinson). It's a film that's constantly evolving, but there's little care into the "hows" and "whys" versus foundational emphasis put on erecting a human-sized uterine tunnel.

At the center of it all is Tomaz (Alec Secareanu), a homeless soldier now seeking refuge in London. PTSD brings upon vicious nightmares, to the point where he must restrain himself with industrial tape before falling asleep out of fear over self-harm. His journey leads to Sister Claire (Imelda Staunton), who introduces him to a young woman named Magda (Carla Juri) and her sickly, incapacitated mother. The sweet, compassionate sister suggests Tomaz stay with Magda and trade housing for labor, which becomes an amicable situation for all. Tomaz begins falling for Magda; they grow closer, but then he begins to suspect Magda's mother (Anah Ruddin) may be suffering from an unholy ailment.

Sounds run-of-the-mill when it comes to possession flicks, right? Amulet is, for a while. Then Magda's inherited house begins to reveal secrets, starting with clogged plumbing due to bat carcasses and covered seashell insignias carved into walls. As Tomaz spends more time with Magda, he becomes comfortable but equally suspicious.Â

The height of uncertainty is when Garai abandons expectations and begins to reward all the previous jumping around between scruffy-troubled Tomaz (present) and the clean-chined militant overseeing an isolated outpost (past). There's a defined distinction between the solemn man before us and his old, more outwardly chipper personality. He's a wanderer haunted by demons both in his mind and Magda's domestic prison.

Here's where things get complicated.Â

Garai isn't about lulling viewers with a sense of normalcy before getting downright zany and overzealous with third-act surprises. Some plotted reveals are...clunky at best (false faces, portals, so on). Tomaz's flashbacks lead to Garai's more impassioned messages about sexuality, gender dominance, and "getting even." What begins as a familiar stroll down moldy, dilapidated corridors keeps redefining itself like the ever-changing architecture in Thirteen Ghosts (metaphorically). Intentions and actions have trouble finding alignment. Amulet attempts to seek vengeance through womanly empowerment, but, in doing so, conveys something utterly different upon a climax-popping ritualistic "punishment."Â

That said, some audiences will bathe in the sadistic undertones of Garai's psycho-arthouse demonic riff. There exist, without argument, some stunning cinematic visuals. Things like bringing dug-up totems to life, splatter tainted blood or capturing Magda's erratic dancing as a sign of humanity (I do like Carla Juri in this shackled role). I don't evoke the names of Evrenol and Zombie without relevance. It's like a hole opens in the ground that leads straight to Hell, Garai punches us downward into a freefall, and all we can do is watch as scenes increase with fury as we keep hurdling downward. No stability, all a rush of experiences that are gone before comprehension can sink inward. If that's your jam, welcome to the party.

Amulet strives to be something its execution does not permit. Its themes are incredibly valid, but the comeuppance is misguided. Stylistic upheavals can't forgive a lack of substance, especially once the film's seriousness hits like a brick wall that completely diverts narrative trajectories. There's so much to say about battling ghosts from our pasts, accountability over erasure, and karma's ultimate designs. Specifically how people with certain chromosomes are allowed to move forward while others must live with tragic memories thanks to society's blind eyes. As I said, there's poignancy and exasperation and angst that's all so very earned. It's just unfortunate how the film's already loosened seams unravel with rapid speeds as Romola Garai unleashes the full gonzo potential of her blasphemous ode to wolves in nice-guy wardrobe.