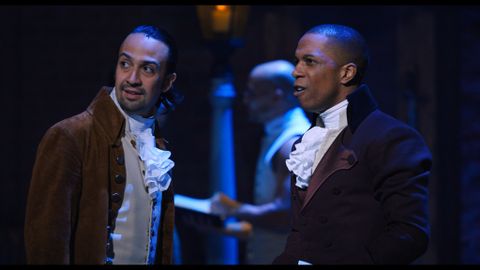 Do not throw away your shot.

Hamilton opened its doors on Broadway five years ago. At the time, no one could have guessed the cultural phenomenon the musical would become. The retelling of the history of the title founding father — an 18th century story told in the 21st century manner — would go on to span continents, bringing the world together in a way that would end up being desperately needed not a year later.

Now, here we are in the future in the beginning of a recession threatening to rival the Great Depression and a global pandemic that's made us feel farther away from each other than many of us have experienced in our lifetimes.

All of that's to say that Hamilton decided to debut on Disney+ right when we needed it most.

If you're reading this, you've likely "worn out" the playlist on Spotify by now. You've probably read as much about the show as anyone else, saw them at the Tonys, and heard tell of the legendary performances of the original cast. If you're extra lucky, you may have even seen the show. Those who have, whether it be traveling cast or the OG crew on Broadway, may be wondering if the cinematic version that was created for Disney+ is worth their time.

The answer to that question is an emphatic "yes".

One of the many things that makes Broadway so special is that no two performances are the same. There are always little choices. The minute changes could be as simple as a different expression or a shifted emphasis on a word, but they're there. Even bigger changes happen from cast to cast, giving a unique view to those who see the show on Broadway just as it does to those who see it off. If those were the only differences that this iteration of Hamilton could boast, that would be enough. But of course, there's more.

There are certain aspects that are expected at this point: the rotating stage is insanely cool, the production of "Satisfied" remains insane, the lighting is masterfully used, and every single member of the cast delivers a knockout performance. All of those things remain true here, but the cinematography that's used to shoot this cinematic version adds a level to the show that wasn't there before.

It doesn't matter how close to the stage you were, (and, let's face it, how many of us managed to score seats that weren't partial views in Balcony C?) you weren't able to see the performances to this level of detail. With the film, we get to see the sheer agony on Hamilton's (Lin-Manuel Miranda) face when George Washington insists he go home during "Meet Me Inside," along with his longing as he stops himself from kissing Angelica during "The Reynolds Pamphlet and the sheer relief at Eliza's (Philipa Soo) forgiveness in "It's Quiet Uptown." It's unlikely that you saw George Washington's (Christopher Jackson) tears during "One Last Time" or Aaron Burr's (Leslie Odom Jr.) slowly burning rage during "Your Obedient Servant." Does that list seem long to you? Because it's not even the tip of the iceberg.

The choreography that we see in the film is by no means new anymore, but it feels disingenuous to not acknowledge the innovation. Bodies are manipulated in perfect time to imitate cannon fire, bullets, hurricanes and more. The transition scenes — more important than one might imagine after exhaustively listening to the soundtrack — expertly couple choreography with simple bars to tell the rare parts of the story that are expressed without song. The dancing: it's next-level.

Hamilton remains a phenomenon not just because of its cultural impact, but because we've all hyped this thing up nonstop for five years and somehow it's still not enough. I have listened to Daveed Diggs rap as Lafayette more times than should be possible, but seeing him do it in this film still took my breath away. Meanwhile, Leslie Odom Jr. (appropriately) plays Burr with a smile for nearly the whole production. Do you have any idea how hard it is to vocally enunciate at that level with a grin on your face? Spoiler alert: It's hard. Then there's Jonathan Groff (yep, as in Kristoff from Frozen and Ford from Mindhunter ) as King George. Groff. Groff sauce. Never, ever, ever change.

Now, for the elephant in the room. Those who follow him on Twitter likely saw Lin's tweet noting that he literally "gave two fucks" so the film could be on Disney+. Well, extremely Hamilton voice that's true! Hercules Mulligan's (Okieriete Onaodowan) "when you knock me down I get the fuck back up" and "Washington On Your Side"s "Southern motherfucking democratic republicans" were both casualties here. The former's hardly noticeable, the second one's a little bit more so, and literally ever other explicit aspect of the show remains completely unchanged.

Since there are still many people who haven't seen the staged version at all yet, we're not going to go into detail about the sole track that's not on the Original Cast Recording. What I will say is that both it and the show's focus on Eliza highlighted just as well as they should have, and that those who are just now going into their first Hamilton experience are in for the time of their lives. If you were on the fence about waiting, don't be. This cinematic version only elevates what was already a miracle of a show.