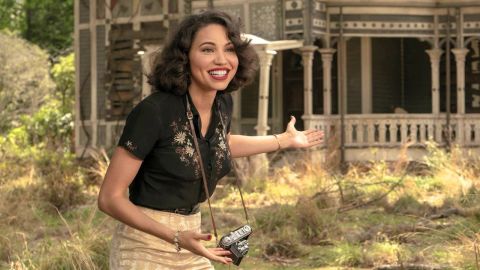 This post contains spoilers for Lovecraft Country.
Check out the review for the previous episode here.

The moral of tonight’s story is that thou shalt not accept money from mysterious sources and use it to purchase haunted houses. Then again, it did all sort of work out in the end. With that in mind maybe we’ll just call the lesson racist Neanderthals should stay out of spaces where they’re unwelcome.

Believing her newfound inheritance is from her late mother, Leti Lewis (Jurnee Smollett) purchases a dilapidated mansion on the North side with good enough bones that it’s worth salvaging. She quickly invites her sister, Ruby Baptiste (Wunmi Mosaku), to move in with her both from guilt and the need to cover the house’s mortgage. It’s Ruby who reminds her sister that the white folks of the North side won’t take so kindly to a bunch of Black folks moving into their neighborhood. Leti knows she’s right but happily dismisses the notion and focuses on restoring the house for the housewarming party. Minor detail: the house is very haunted.

While she lays the groundwork for her new home, Tic Freeman (Jonathan Majors) remains with Hippolyta (Aunjanue Ellis) and young Diana (Jada Harris) in the wake of Uncle George’s (Courtney B. Vance) death. While she grieves, Hippolyta has found herself done with Tic’s helpfulness. Sensing this, Tic briefly entertains the idea of moving in with his father for a few days. Unfortunately, it doesn’t seem that the death of his brother has taught Montrose Freeman (Michael Kenneth Williams) how to be a better father. With his father found, his aunt and cousin in order, and nowhere to go in town, Tic decides it’s time for him to head back to Florida.

It’s been three weeks since George’s funeral when Tic finally goes to say goodbye to Leti. Of course, it’s not time for these two to part ways just yet. The day Tic swings by to bid farewell is the day the town’s white folks decide it’s time to start making trouble for Leti and her artist roommates. They park their cars in front and lash bricks to the horns, using psychological warfare in hopes to force them out. Obviously, they greatly underestimate Leti’s stubbornness.

The housewarming party comes, and with it a rollercoaster of highs and lows. Leti keeps the drink coming, Hippolyta brought enough food to feed a small army, everyone’s dancing and singing, Leti and Tic finally rip each other’s clothes off, it’s a grand night for everyone! We’ll get back to that ripping each other’s clothes off in a bit, the evening’s not over. After the two return downstairs, crashes can be heard outside. When they look out the window there’s a burning cross in their yard.

And with that, Letitia Motherfucking Lewis has had enough.

Leti grabs a bat while some of the men grab rifles and Ruby grabs the car. The best scene of the episode unfolds as Leti smashes each of the cars to hell and back, knocking the bricks off their horns and doing some extra damage for good measure. By the time the sirens come, Ruby’s out front with the trunk open. In go the rifles and the bat, and on their knees go Leti and the men who stood watch. They’re arrested, Leti’s banged up in the cop car, and the Sheriff wants to know just who in the hell told her to purchase a haunted house. As it happens, he’s much more interested because it was his (now very dead) good buddy’s home. It’s that very same good buddy that’s been messing with Leti’s boiler and put all the other restless spirits in her home.

The Winthrop house, as it’s known, was once owned by one Dr. Winthrop. The “good” doctor liked to experiment on folks, but would never do such a thing to his white neighbors. Instead, the Sheriff plucked Black people from the South side and used them to feed into his experiments. The body parts of eight separate people were all found in the basement of the home. Eventually, so was the body of Dr. Winthrop.

The rest of “Holy Ghost” focuses on Leti and Tic coming together to free the spirits trapped in the home. Dr. Wintrhop gives them some trouble, but the mangled corpses he left behind come together to protect Leti and exorcise Winthrop’s spirit from Tic before he can do any harm. Not to put too fine a point on it, but Jurnee Smollett acts her ass off in this scene.

While Lovecraft Country hasn’t had a bad entry yet, “Holy Ghost” might be its best so far. Everyone’s trying to heal in the wake of George’s death while also trying to carve out a place for themselves in a neighborhood that will do anything to remove them. Leti allows herself to feel and to need in ways that we haven’t seen from her before, a character move that we eventually learn is because she feels like a part of her is missing since her resurrection. Meanwhile, her and Tic’s budding relationship remains one of the series’ heaviest hitters.

When the two finally sleep together, it’s fervent, passionate and needy. Leti will blame the blood on her period at first, but we learn before the episode’s close that it was because it was her first time. Tic’s immediately horrified not because he regrets what they’d done but because there was nothing gentle about their first interaction. He was also nothing but understanding about getting a little blood on him. What I’m saying here is that there are lessons to be learned from Tic that a whole lot of men would benefit from, and the way this relationship has grown so far adds a layer of softness to an otherwise hard and gruesome series.

Speaking of gruesome, those of you who missed the monsters last episode got them aplenty in “Holy Ghost.” The remains of the eight frequently pop up throughout, with several moments being downright terrifying. Mangled corpses march throughout the story, some comical and others complete nightmares. The deaths of the white intruders are gnarly (and earned) with a decapitation scene that the squeamish might want to look away from. Their corpses rot in the cellar with the bones of those the doctor mangled before them, but when she’s asked about it Leti doesn’t seem to know of their deaths.

This review has already gone long, but there are a couple more tidbits we need to discuss before we close. The first is the fight between Leti and Ruby after Leti admits she received an inheritance from their mother. In their argument, Ruby reminds her sister just how selfish and broken she is, and how she’s helping her friends and not her community like she claims. It’s this that will drive Leti to open the house to those most in need, a storyline I very much look forward to diving into more.

Finally, there’s where that money came from. Leti and Ruby’s mother was dirt poor and didn’t do much to show love to either of her daughters. There was never any way that the money came from her. Instead, it came from one Christina Braithwhite (Abbey Lee), who obviously did not die in the collapse of her family mansion. She nudged Leti to buy the Winthrop house because its former owner was once a member of The Order of the Ancient Dawn. He was kicked out for stealing pages from the Book of Adam. Pages that she wants so she can increase her own power. She remains a tricky “friend.” For now.

Braithwhite’s speech is where we leave things for this week. Leti’s home is now free of tortured spirits and evil doctors (though her cellar has a few more dead bodies), Tic seems to be sticking around for now, and Hippolyta is on to the fact that they’re not being honest about the death of her husband. See you next week!