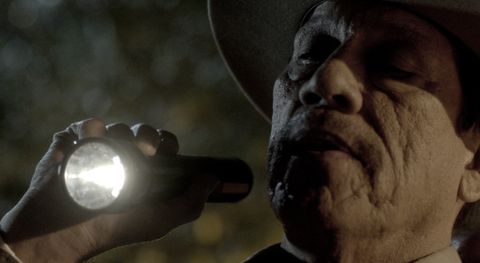 'Murder In The Woods' is as well-conceptualized as the title, which struggles to get past the generic nature of this seen-it-before narrative that lacks inspired execution.

When film titles are as plain as denim on a Canadian, one of two things is typically true. Either what awaits viewers is far more complex than the barebones description offered, or predictability becomes the narrative’s common language. Cabin In The Woods is an outstanding example of the former, while Luis Iga’s Murder In The Woods disappointingly represents the latter. A movie that slays silly victims with independent chutzpah, but offers only the most rudimentary and replayed genre beats.

We follow - hold onto your butts - a group of teens as they inhabit a woodland party pad for the night. Jesse (José Julián) offers his family’s estate for Chelsea’s (Chelsea Rendon) birthday celebration, mainly because Chelsea’s cousin Fernanda (Jeanette Samano) will be tagging along. A handful of other genre stereotypes round out the crew, including party boy Jule (Kade Wise), Mr. Abs-Of-Steel Gabe (Jordan Diambrini), and selfie-model Celeste (Catherine Toribio). Liquor shots are chugged, weed brownies ingested, then a masked body falls out of an upstairs closet. Commence inebriated panic and more corpses.

Familiarity is an expectancy in the horror genre. Pick a month, and you’ll witness drunken buffoons get hacked to bits in the middle of backwoods nowhere. That’s not the issue with Murder In The Woods. It’s how filmmakers and writers aren’t able to subvert and reform overused screenplay blueprints or execute technical proficiency. Yelyna De Leon scripts something with perceived ritualistic mysticism, and possibly a non-linear roadmap, but Iga never commands an experience that’s either surprising or more thoughtful than exhausted clichés.

Let’s start with the dialogue, which runs through prototypical excuses whenever someone tries to warn their companions of imminent danger. “Did you see a dead body, or are you just too drunk off that single shot of tequila?!” A reasonable ask, but the failure comes after said character crying “bloody cadaver” doubts themselves; then it’s back to extreme levels naivety. Still not worse than characters saying things that factually do not occur, like when Fernanda rattles through every version of “I saw something dead,” from “I saw a corpse,” to “I saw him die,” then, “I saw him dying in front of me,” within twenty seconds. Performers have such a difficult time keeping their stories straight, before abandoning evident perceptions of something horrific because booze acts as a constant (leaned upon) foil.

Perhaps it’s the frequently unstable camera movements, as cinematography wiggles haphazardly as if recorded by a drunk uncle filming your first birthday celebration on home video. Murder In The Woods struggles with camera motions that are downright ugly in spots, with comparable lighting to my amateur YouTube studio setup at night. Character faces are blasted with brightness, while the back-half of the location is nearly pitch-black. Independent cinema often cannot afford steadying rigs or benefits on larger productions, but that doesn’t excuse wobbly-woozy lensing choices that are aesthetically unappealing (distortion does not equate to inherent dread).

Even more terrible, actors sport worse poker faces than your friend who stumbles into a casino card room stinking of whiskey. De Leon’s screenplay requires finesse on behalf of performances, as twists entangle characters who’re unaware of their surroundings. Any downplay tactics are detrimentally heavy-handed, even from the very first sequence as Chelsea’s crew barges into Jesse’s home, and an antique rocking chair is teetering on its own. “Probably the wind,” says one of the buffoons nervously. “Don’t worry!” Cue the champagne bottle popping when Jule ushers everyone to the pong table, then characters selfishly wandering into dense forest nothingness still 30 miles from civilization, and kills that clearly out someone as having nefarious involvement in to-be-revealed backstory “bombshells.”

Oh yeah, and Danny Trejo mean mugs as Sheriff Lorenzo for a minutes-long duration of screen time like in most of his indie horror appearances. Nothing added but a familiar face and raspy voice.

Murder In The Woods is one of those films that’s written, presented, and performed as someone’s outsider interpretation of all the horror films they’ve ever passively watched on basic cable. Characters often make comments about how they’ve “seen too many horror movies,” but it’s a hollow sentiment. A few short bursts of broken-bong gore and practical death effects cannot resurrect something more inviting than this sometimes (super)softcore "skinema", other times telenovela-but-blander stalker story that ends one-million-percent as you’d suspect. At best, you’re treated to the exact base-value slasher outline that Cabin In The Woods satirizes to perfection. At worst? Overdramatic romantic turf wars bleed into shoddy craftsmanship that cannot be salvaged by cast, crew, or spirited do-it-yourself gusto.