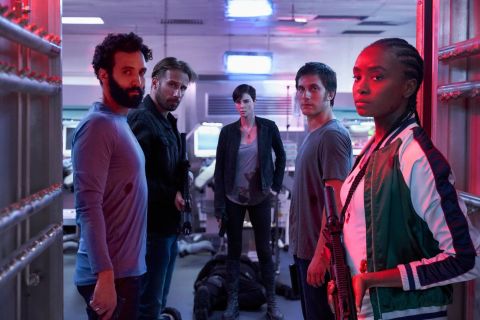 The bottom line is that Charlize Theron has an axe. I don't really know what else you need to immediately sell you on this movie.

A lot of films about immortal creatures share a similar vibe. There are very few stakes, usually a fair amount of selfishness or seclusion, and the eldest immortals are always the most bitter. Now, a couple of those statements do ring true for Gina Prince-Bythewood's The Old Guard . Andy (Charlize Theron) is mostly disenchanted with the world around her, and the team is forced to keep their lives relatively off the grid. Outside of that? The Old Guard ends up being something really fun and unique.

The premise is pretty simple – four immortals have defended humanity for centuries, and are eventually discovered by an ex-CIA agent working for big pharma. The antagonists' endgame seems noble enough. They're convinced that the secret to curing all disease rests in the DNA of Andy and her team (though some are willing to go further than others). As they evade those that would do them harm, the four dream of a fifth immortal that's been born into their ranks. Because who doesn't want to babysit while on the run?

The film expertly humanizes its leads in record time. All it takes is a piece of baklava and a bet between them all to illustrate how much of a family they've all become over the years. There's no petty squabbling of those who have spent too much time together, or any sort of disenchantment. It's easily established that Andy is the eldest, and she can still find endless bliss in a small pastry.

Not to go all Fast and the Furious on you, but there's also a strong focus on family here. It's never called out by name, it's just shown in each of the four's deep love for one another. Joe (Marwan Kenzari) and Nikki (Luca Marinelli) fell in love during the crusades. The twist? They were on opposing sides. Booker (Matthias Schoenaerts) plays the youngest of the original four at the ripe young age of about two hundred or so, and acts as Andy's right hand man.

Nile's (KiKi Layne) introduction ends up being what was supposed to be her murder. Prince-Bythewood successfully conveys her earnestness and desire to do good from the jump. It's not until Andy finds her that we also learn of her stubbornness and commitment to her beliefs. While it may frustrate Andy and bemuse the rest of the team, they all find out sooner rather than later that their newest member's devotion will work out in their favor.

You may have noticed in the introduction that I left "a lack of stakes" off of The Old Guard 's comparison to other immortal fare. While their immortality does play a critical role in the story, it is also finite. Adding to the unknown is the fact that everyone's time is different. Andy's lost people much younger than her. Each time one of them dies, she wonders if it will be the last time. As it happens, one member of the team will lose their powers before it's all said and done.

For a movie about ass-kicking immortals with a new vendetta against Big Pharma, The Old Guard has a surprising amount of heart. That "heart" is sprinkled cleverly throughout the course of the film. It's in small moments between Joe and Nikki, or shared glances between Andy and Booker. You see it in Nile's hope and Copley's (Chiwetel Ejiofor) agony. Even when characters are betraying each other, there's a deeper, human reason to it. The film's sincerity is always there, layered in with Extraction -level action.

Said action is used cleverly as well. We're all here for bone-crunching goodness, but it can be empty (see the aforementioned Extraction ). There's still some of that "big action" level violence to be found here, but its best moments are when that violence is earned. Often, those scenes belong to lovers Joe and Nikki - they experience a lot of pain in The Old Guard , but they dish it right back – but Andy gets a few well-earned ax swings as well.

Impressively enough, none of the main characters seem sidelined throughout the story. That may seem redundant, because "main character" is included in the sentence, but it rarely works that way with large ensemble casts. Andy, Nikki, Joe, Booker and Nile all get their due in this story. The very same story that also manages to be heartfelt, as well as ass-kicking, and takes the time to include some social commentary to boot.

The long and short of it is that Netflix's The Old Guard has it all. The streaming giant hasn't always nailed it with their original content, but this one's managed to be one of this critic's favorite films of the year so far. While the film does stand on its own two legs, it does appear to be setting up a franchise. This is great news, because if you're like me you'll be wanting more the second the credits roll.

As an aside, you should always sit through the credits of a film (those folks all worked very hard!) but you'll especially want to stick around for these.

So, when's the sequel?

Two action-packed hours featuring Charlize Theron, Chiwetel Ejiofor, and an absolutely rockstar cast. What more could you want for your Friday evening stream?