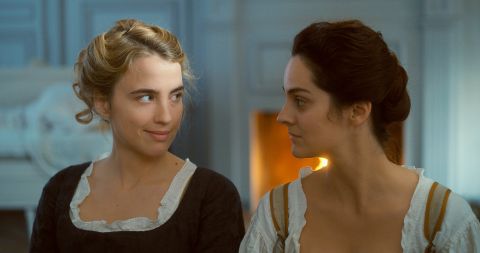 Beautifully shot, wonderfully acted, and fully worthy of its accolades. The sense of love and loss is real — and both end too soon.

Portrait of a Lady on Fire is not a love story with a happy ending. That certainly is no surprise. And you've be forgiven if you enter into this film thinking you've been here before. But that makes the 2019 winner of the best screenplay (and Queer Palm) at the Cannes Film Festival all the more enjoyable.

This French film (as in get ready for subtitltes, folks — or learn French) from Céline Sciamma is wonderfully sparse, but wastes no space. Instead it's filled with what's not said (at least not at first), and with what's ultimately felt between two women. One is putting off an arranged marriage as long as possible. The other's job is to do the task that will allow that marriage to happen.

Portrait of a Lady on Fire is available now on Hulu , having been released on the streaming service early after its run in theaters was cut short in the spring of 2020.

Some things just stick with you. It's been more than a quarter-century since The Piano was released — Jane Campion's period piece that told the story of an arranged marriage and a forbidden love, set in the undeveloped wilds of New Zealand. Rough seas and beaches. Pre-industrial living.

Portrait of a Lady on Fire very much brought back teenage memories of that movie. Set in blustery Brittany in Northwest France, Héloïse (Adèle Haenel), having returned home from the convent, is to be married to a man in Milan. Not that she wants to. But he comes from noble blood, and his family will not allow the marriage before receiving an acceptable portrait. Héloïse wants none of this, the obvious lack of choice for women in the 18th century being one reason.

How to scuttle the nuptials, then? Refuse to sit for a portrait. Héloïse ran off the first portrait artist, her mother (Valeria Golino) tells Marianne (Noémie Merlant). (Marianne's father previously painted the portrait of the Countess.) The young painter has been brought in to the island by boat — no small feat in the 1790s, never mind that she's had to bring her canvasses with her — to paint Héloïse's portrait on the sly. Héloïse has been told that Marianne is there to accompany Héloïse on walks to make sure she doesn't throw herself off the cliffs like her sister did for some unknown reason. Nobody actually knows whether she fell or jumped, just that she ended up dead at the bottom. "I wasn't wary enough with her sister," their mother tells Marianne, adding that Héloïse hasn't been allowed out of the house since.

We already know that Marianne isn't going to be a timid artist. Or a timid woman artist, at that. She has no problem painting nudes, she's just not allowed to paint the male figure. Not that that stops her. And arriving at the house having rescued her canvases from the sea (and lugged them herself from the coast), she quickly strips naked in front of the fire in her room, warming herself on the floor, smoking a pipe. Clearly, this is a young woman who knows herself.

But will Marianne get to know her subject? She's already heard the story of Héloïse's sister's death, from the maid, Sophie (Luàna Bajrami). Her first sighting of a hooded, robed Héloïse comes from behind. Héloïse starts running, and we don't see her face until she stops just short of the cliff's edge and turns, with Marianne chasing after. Was she going to jump? "I've dreamt of that for years," Héloïse says in her first words to Marianne. But not dying. "Running." Clearly there's more here, too.

But with the portrait finished, Marianne's time is up. She has one demand, though — she wants to be the one to show the painting to Héloïse and come clean as to her real purpose on the island. She does, and the two have it out. But Marianne knows the portrait was more paint-by-numbers than passion. She doesn't like it. Héloïse definitely doesn't like it. And after Marianne destroys the painting, Héloïse agrees to sit for a proper picture. The Countess is in disbelief. But the girls now have more time together.

Later, Héloïse and Marianne attend an all-women bonfire as they help the maid, Sophie, attempt to have an abortion. Marianne stares at Héloïse through the flames as everyone sings. The lady, she is on fire — both figuratively and, it turns out, literally.

A couple days later comes Sophie's procedure, which is too much for even Marianne to watch. Until Héloïse makes her, later re-enacting the event for Marianne to paint. (Nobody asked Sophie how she felt about that idea.) The girls have some sex and then do some armpit drugs (yes, really), and then it's finally time to paint. And that leads to an epic row.

The girls fight. Héloïse disappears, and Marianne learns they have just one more day alone (OK, with Sophie, just in case anyone wants to re-enact the abortion one more time, perhaps) and make the most of it. First comes first, though: The painting.

"How do we know it's finished?" Héloïse asks. "At one point, we stop," Marianne replies, adding a few final flicks of her brush on the neckline and ear. And ... it looks like Héloïse. Definitely better than the first painting. And it's finally done. The painting that will allow — force — Héloïse to marry, taking her away from Marianne. (Or the other way around, since Marianne's job will be done and she'll return home.)

The most sensual parts of the movie — come next — and I'm not going to spoil them here. They're as delicately acted as they are touching, the sort of thing you only see in movies and would consider yourself lucky to have experienced by half in real life. (Which, sadly, simply isn't scripted as well as what we enjoy on screen.)

And Portrait of a Lady On Fire ends with Marianne telling us about the two other times she saw Héloïse after that. The first, fitting, was in a portrait. Not Marianne's, but one later, with Héloïse and a child. The second, though, was at the symphony. Héloïse didn't see Marianne. But she felt her, chest heaving, with the movie ending on Héloïse crying through the performance.

Because you're finished when, at one point, it stops.