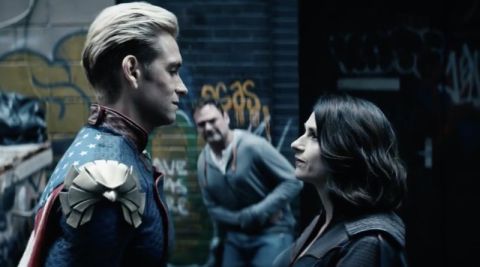 'The Boys' is saying the quiet stuff out loud at this point, and that’s what I've come to love about this satire that refuses to shy away from loud convictions against oppression.

An immortal Adonis in an American flag costume locks lips with an outed Nazi infiltrator who, herself, once donned red, white, and blue while spreading her message of hatred. A personified version of The Constitution, chiseled from Aryan stone, spends all episode mentally undressing an equal womanly representation of Mein Kampf. Is the symbolism sinking in yet, class? The Boys, indeed, blew “The Bloody Doors Off” tonight. Let’s dive into how Amazon’s superhero dystopia remains scarily relevant and unapologetically accusatory.

Why don't we start with Butcher’s (Karl Urban) latest mission, thanks to Starlight’s (Erin Moriarty) snooping around Stormfront’s (Aya Cash) Dawn Of The Seven trailer. Email correspondence between Stormfront and Stan Edgar (Giancarlo Esposito) keeps mentioning Sage Grove Center, a psychiatric hospital under Vought’s domain. Butcher’s crew road trips to the Pennsylvania facility with Starlight riding shotgun, much to Butcher’s dismay, where an undercover operation sends Mother’s Milk (Laz Alonso), Frenchie (Tomer Capon), and Kimiko (Karen Fukuhara) inside disguised as orderlies. What they find is a program that tests the stabilization of Compound V within adult subjects, and at the center of it all? An old adversary and torcher of Mallory’s (Laila Robins) grandchildren: Lamplighter (Shawn Ashmore).

The formal introduction of Lamplighter allows for a more Frenchie-heavy episode. Flashbacks take us five years prior when Frenchie, a toxic mixologist with a love of Golden Girls, was essentially blackmailed into working for Mallory. Cherie (Jordana Lajoie) and Jay (Michael Ayres) were his only family, and he accepts Mallory's offer to keep them out of prison. Frenchie's trauma stems from the night he should have prevented Lamplighter from accidentally assassinating Mallory's family, but he's beckoned home when Jay overdoses, fleeing his post. Since then, Frenchie lives every trauma-inflicted day atoning for the failures of his past through imposed punishment. “What makes you think I want to be let off the hook?” Sympathy means nothing. Frenchie’s now more than a meth-cellar renaissance man.

Amidst all the soul-searching and Lamplighter drama, Sage Grove Center turns into a lockdown prison when patients break out of containment. Supes with vendettas flood the hallways, looking to enact revenge against physicians, security guards, anyone involved. Frenchie, Kimiko, and Mother’s Milk flee with Lamplighter's navigation. A host of superpowered obstacles stand in their way, including an acid puker, soundwave blaster, and makes-people-explode Cindy (Ess Hödlmoser), who draws enough focus to sell her recurring importance. Oh, and comic fans, Love Sausage (Andrew Jackson) sighting! Although not the bearish Russian teddy swinging a gargantuan trouser snake the comics hold.

Outside, as alarm bells ring in the distance, Starlight confronts Butcher over his supe disdain. “Under all that swagger, you’re just another bigot and a bully.” Before Butcher can lay into the Vought turncoat, an escaped Sage Grove Center captive injures Hughie (Jack Quaid) as he’s impaled by van wreckage shards. Starlight tries to commandeer a passing automobile peacefully. Butcher escalates. The driver pulls a gun on both of them, and before Butcher can execute another “problem,” Starlight zaps the motorist dead. You can witness her moral barriers shatter as Butcher reconsiders his harsh position against Starlight, which only makes Starlight more heartbroken. “I’m not like you,” she persists. Cut to Butcher and Starlight standing over Hughie, commenting how the wee, sweet lad is too good for the both of ‘em. Not so different after all, bonded through violence, mercilessness, and the failures of “doing the right thing.” I’m not sure I love how Starlight’s portrayed by this act, but I’ll take Butcher’s compassion in the form of *not* lodging a .50 caliber round between Starlight’s eyes.

In short: Hughie’s all patched up, Cindy’s hitchhiking towards somewhere, Frenchie pleads with Mallory to spare Lamplighter’s life (a connection between the remorse), but everything seems copasetic for the moment. Now onto Nazi stuff.

Before the siege at Sage Grove Center, Mother’s Milk catches Stormfront questioning one of the patients with Lamplighter (before he “burns the evidence'). It turns out Stormfront has been frequenting the experimental ward behind Homelander’s (Antony Starr) back, and his boyfriend jealously is becoming dangerous. Stormfront says she’s going to Vought Tower, Homelander checks, realizes he’s been played, and sets his film set trailer ablaze as his masculinity is bruised. How dare a woman betray the picturesque alpha elitism of the male gender? Confession time.

Stormfront has no choice but to expose her past as Liberty but reaches even further into her trunk of generational memories. It turns out America wasn’t her first home, proven by a picture on her wedding night in Germany, where she proudly stands beside her husband, Frederick Vought (their backdrop a Nazi flag). She’s the first successful injection of Compound V into an adult, which ties back to her Sage Grove Center trails. The supremacist who once hobnobbed with Goebbels confesses her love to Homelander, two deities who now will never have to be alone, along with her no-minced-words masterplan about reclaiming the world from inferior specimens who’ve invaded like vermin.

“We are in a war for the culture. The other races are grinding us down and taking what’s rightfully ours, but we can fight back. With an army of supermen millions-strong because that is Vought’s true destiny. And you will be the man who leads us.’

Listen, I’m not claiming The Boys has opted for subtlety thus far. Stormfront’s faux-feminism and social media manipulation have mirrored political campaigns that’ve polluted patriotism for the last four years. Still, hearing Stormfront’s manifesto only hours after the Breonna Taylor verdict punished one lawman for endangering her white neighbors, feels like this must read like a historical biography (with super-humans) at this point. There’s a reason why this season’s big-bad isn’t wearing Jodhpurs or speaking with an accent or sporting a Swastika tattoo. The imagery of Homelander tonsil-flicking Stormfront, locked in passion, speaks ten-thousand words about our world’s dire perspective. Homelander, the nationalist hero. I’m terrified to see what atrocities remain relevant next episode.

When I first learned The Boys would be developed for screen, part of me worried no showrunners would allow Garth Ennis’ comic series to exist as-created (better it didn’t, for storytelling reasons). After “The Bloody Doors Off,” consider those forgotten thoughts. What Vought International represents, the vile gaslighting portrayed on screen, is an encapsulation of many Americans' current fears. The brainwashing is representative of those who view The Boys purely as entertainment. When ugliness is exposed, it’s harder to parse what’s Hollywood fabrication from the real-world ugliness that’s taken neighboring residences in my mind. For me, there’s a strange catharsis in an otherwise outspoken narrative that spells-out straightforward scripted protests.

For those who can’t handle art imitating life right now? Your aversion is understood, especially given how The Boys is becoming better and better at this by the week.