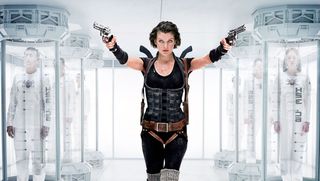 As a horror fan whose gaming habits once resulted in N64 thumb callouses, the Resident Evil franchise has always been a personal fixation. Paul W. S. Anderson turned Capcom's iconic shoot-and-loot escapism into the highest-grossing film series based on a video game, amassing over $1 billion worldwide. Hollywood and controller-based entertainment typically mix like oil and water, yet Anderson defied the odds with Project Alice's decade-plus journey. Far from an undefeatable critical success, but reviews don't pay the bills. Check those international box office numbers if you're asking how six Resident Evil movies hit theaters.

I use the word "fixation" above because Anderson's screenplays follow a confounding narrative throughline. The Resident Evil games are impressively cinematic themselves and offer a blueprint one could retrace beat-for-beat. So what does Anderson do? Go wildly "off-script," so to say, opting for a clunky sci-fi action structure that becomes an ongoing guessing game of tangled plotlines as the franchise tailspins into later entries. Whenever questions arise, Anderson falls back on the age-old excuse of, "well, clones!"

Even still, there's a solid trifecta of zombie horror to Anderson and two co-directors' names. Everything gets embarrassingly fan-service-y in the back half, but quality aside, the horror genre proves itself the most capable medium for video game adaptations. From Raccoon City's facility outbreak to Nemesis' revenge, to Las Vegas' dystopian sand dunes. Some even value the sillier moments involving Axeman (times two), Las Plagas, and Jill Valentine's traitorous mindwipe. Anderson's haphazard references pluck from recognizable game experiences for on-screen déjà vu, and what's reused dangles the proverbial carrot fans can't help but chase.

Why don't we reboot Umbrella's program once more with recommendations in mind? Regarding the Resident Evil franchise, let's count through the highs and lows: those you shouldn't ignore, and those worth skipping. Even with the T-virus infection at its worst, you win some and lose some.

Unfortunately, the franchise’s finale is, without a doubt, skippable.

It’s the one that willfully ignores paying off Resident Evil: Retribution’s Washington D.C. cliffhanger. It’s the one that edits every single scene into a whiplash-inducing tornado of incomprehensible fly-by proportions. It’s the one that populates a random roster of characters despite there being no correlation to those left standing atop the White House when Retribution closes.

At least Retribution cares about its audience. Nostalgia reliance, callbacks, and all. Resident Evil: The Final Chapter shows less respect towards its viewers than Paranormal Activity: The Ghost Dimension does its own franchise devotees. Those who’ve anxiously yelped while playing Capcom’s sustainably tense series can only ask how we’ve gotten to “the trinity of bitches,” as Dr. Isaacs (Iain Glen) insults. Devoid of horror, mindless in its plotted jungle of incoherency, and ultimately lost in its failed attempt to make corporate commentaries on Umbrella’s behalf. It’s an unpleasant experience visually, comprehensively, any way you slice.

I can only recommend The Final Chapter if you’re looking for a reason to get motion sick from camera cuts or want to study one of the chief examples of how not to end an already off-the-rails franchise.

Upon my rewatch, I couldn’t remember a single signifying aspect of Resident Evil: Afterlife. After a refresher? I still cannot.

Anderson’s first Resident Evil back in the director’s chair since the original is a stark contrast. He opens in Tokyo, where multiple Alices (Milla Jovovich) siege Wesker’s (Shawn Roberts) hideaway and can’t stop ripping off The Matrix’s slow-motion action (with less complexity and grace). We meet Chris Redfield (Wentworth Miller). Claire Redfield (Ali Larter) pops back into frame, and Axeman comes to town because Silent Hill’s Pyramid Head can’t be the only lumbering survival horror brute with a novelty-sized weapon.

It’s all so bland, so blah, as Alice finds out that Arcadia isn’t an Alaskan stronghold for survivors but instead a cargo ship broadcasting at sea. It’s also where Anderson starts losing control of his narrative decisions, as clones and recurring characters make less and less sense as to their film by film inclusions. Not to mention, when did the genre shift from horror?

Afterlife is where everything starts going wrong(er), but worse still, it’s unmemorable to boot. Los Angeles may be burning, but it’s hard to muster much of a care.

Resident Evil: Retribution is the “dumb fun” entry where Anderson panic-reacts to growing concerns over the franchise’s deviation from Capcom’s world. The Arcadia subplot is blown to smithereens (sorry K-Mart), the Redfields disappear, and characters like Leon (Johann Urb) or Ada Wong (Li Bingbing) or Barry Burton (Kevin Durand) appear for the first time without nary an organic announcement.

It’s the knee-jerk reaction to hushing grumbles from diehard fans. Simultaneously, it could be one of the most egregious yet entertaining-enough examples of audience pandering any adaptation has ever offered.

What’s sold as a country-hopping tour through infected locations turns out to be another Umbrella complex escape, with “simulations” in different areas. Michelle Rodriguez, Oded Fehr, and Colin Salmon are all back as their evil Umbrella doppelgängers. It’s a “greatest hits” in cinematic form, from Axeman’s return and duplication on New York City’s streets to the Las Plagas comrade ranks who pin Leon’s squad inside Red Square storefronts. Perhaps wholly standalone and throw away, but with so many winks at the audience, you eventually forfeit to the film’s very-closely-familiar video game structure.

Agents enter a new arena, the simulation begins, bad guys appear, and there’s a boss battle before entering the next geographic location to be overrun by zombie hordes. It’s all so mindless, but we do get Barry Burton chomping down on his cigar while blowing away Umbrella henchmen. Maybe, this time, that’s enough? Sure as sunshine beats the previous titles.

Do I laugh at zombie crows every time? Without fail. Is Resident Evil: Extinction the last Resident Evil flick to pack that more horror-driven punch? Alas, only three films into a six-film franchise, indeed.

When compared to Resident Evil: Apocalypse, in sequential order, they’re yin and yang. Apocalypse is the midnight-dreary recontextualization of console to screen; Extinction is a sunlight-blistered deviation that plays in a whole new world’s sandbox (literally, since Las Vegas is buried under granular mounds). Director Russell Mulcahy’s deeply yellowed aesthetic sells this metaphorical mirage of safety in an otherwise desolate America with more of an eye for ferocity than Anderson’s yet-to-come sequels. There’s an intensity when zombies attack or animal threats descend upon screaming survivors that’s sorely missed as Alice’s adventures continue onward, back under Anderson’s command.

Extinction is the one that wants to play with Mad Max vibes, introduces telekinetic powers into Alice’s abilities, and grants Dr. Isaacs his mad-scientist arc through self-administered “antidote” injections. In the universe of Resident Evil, that’s a rather tame plotted melting-pot of horror and science fiction. Also, it’s the last time said franchise would succeed in balancing the studio’s fascination with converting Resident Evil into an action-forward product versus the horror elements that repeatedly struggle to remain horrific.

Resident Evil. Anderson's "Patient Zero." The Hive's outbreak. It borrows from Capcom’s Resident Evil and Resident Evil 2 but asserts the franchise as something more exciting than the puzzle-based gameplay of the Japanese designer’s heralded series.

Milla Jovovich's introduction as amnesiac Alice, before all the superpower upgrades and Neo-lite backflips, unleashes that horror-forward bite as Racoon City's underground lab system is overrun by infected scientists, guards, and anyone else trapped below. It's not the gothic, jump-a-minute horror playthrough that resembles Resident Evil's game format, but that makes sense given how that approach might be what some refer to as "A24 Horror" these days. Anderson's task was to develop what could turn into a viable blockbuster horror franchise. Mission accomplished.

I want to stress, as you scroll back on less favorable write-ups above, the Resident Evil franchise doesn't "fail" because it attempts to write its own off-brand story. It fails because where Alice ventures post-Apocalypse never equates to anything more impressive than what's already available in Capcom's franchise. That's why franchise complaints always point back to a knotted mess of narrative choices that never loosen themselves from their monstrous ball of buffoonish reveals.

That said, in its first incarnation? Baby Resident Evil? The Red Queen's devious traps mixed with gnashing viral zomboids bashing down doors (plus Lickers) makes for one of the video game subgenre’s better adaptations. I still stand by that assertion.

Yes, the crowning achievement in Anderson's Resident Evil franchise was directed by someone else. Alexander Witt's feature debut, to be exact.

In the film, Project Nemesis hunts Alice and her rag-tag assortment of survivors including Jill Valentine (Sienna Guillory) and strapped-up L.J. (Mike Epps). It feels, instinctively, like a video game in the way supporting characters are interacted with (STARS operatives who feel like added A.I. wanderers). There's a core hunt-and-stalk dynamic, with Witt's visuals soaked in nighttime dread (thickest of darkness), and it's the closest any Resident Evil gets to being a horror movie. Who can forget when reporter Terri Morales (Sandrine Holt) gets devoured by zombie school kids or Nicholai Ginovaef’s (Zack Ward) puppy-chow death by Cerberus hounds?

It's the Resident Evil cinematic approach I wanted from every adaptation. There's an investment in scares over high-adrenaline action, yet Alice still finds time to land finishing moves on vile creatures while flying through the air on a motorcycle. Plus, Nemesis' muscly design does "The Pursuer" justice.

Some reject the ending's climactic finale between Alice and Nemesis, as emotions are allowed to influence the outcome, but I'm here for all of it. Tough guys are allowed to have feelings, too—even undead test-tube berzerkers.

Frankly, Resident Evil: Apocalypse should have been the atmospheric and representative template for every Resident Evil movie to follow.