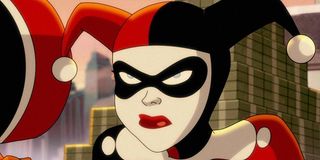 Today, along with the news of DC Universe transitioning into comic-based DC Universe Infinite, it was announced that their series, Harley Quinn, was renewed for a third season on HBO Max. This news was released the morning of the Jewish new year.

Harley Quinn came in swinging as a progressive take on the popular Batman universe characters. It dunks on everyone, making Joker look like a vain chump, poking fun at the Dark Knight better than the Lego Batman movie and respecting many facets of the lore while absolutely slaughtering them. It boasts a diverse cast, new takes on characters, and it’s feminist as hell.

The combination of these things is a reminder that Jewish people aren’t welcome in progressive spaces.

The second episode of Harley Quinn showcases one of the many changes made to the canon characters; it retcons Penguin (the hooked nose villain) to make him Jewish. Sure, they could have jammed us into the show by highlighting the Jewish roots of existing characters (Harley, herself, is Jewish which I believe is tackled in later episodes) but here was the show’s first attempt. Harley, along with the Legion of Doom, crash Penguin’s nephew’s bar mitzvah, a Jewish coming of age ceremony. The theme of Cobblepot’s event is money and the giveaways are bags of cash. This is one of the first instances of economic anti-Semitism in the series, a trope used to target Jews potentially since the middle ages, and a major theme in WWII propaganda.

Later, the show introduces Ivy’s landlord, Sy Borgman, a character the creators casually referred to as “Half Man, Half Jew.” (Get it? Because Jews aren’t human). Sy is your average cartoon Jewish stereotype who makes quips about his malfunctioning digestive system and love for sauerkraut. But then, after discovering Harley and her crew in a catatonic state (the crew having entered Harley’s mind), Sy and his wife decide to be rid of their tenants by using “Jewish lightning.” This phrase is a blatantly antisemitic and another example of economic anti-Semitism that refers to Jews starting intentional fires in buildings they own to collect the insurance money.

Watching from inside Harley’s head the gang asks what “Jewish lightning” is and guess it’s “Black Lightning’s Israeli cousin.” Plainly, not all Jews are Israeli and this joke, at the least, shows a blatant ignorance to Jewish identity. Digging deeper, the association of all Jewish people with Israel has been an excuse used for anti-Semitism disguised as antizionism. Criticism of Israel crosses the line into anti-Semitism when all Jewish people are held responsible for the actions of the state. To equate Jewishness with being Israeli is an extension of that.

Later in the same episode, the crew is woken up by the Borgmans loading their bodies into an oven. Jewish people don’t burn or cremate bodies, something that made their burning in ovens during the holocaust a layered violation. The association of Jewish characters with bodies being shoved into ovens is jarring, and at the very least, illustrates a stunning ignorance to Jewish history. In January of this year, The Guardian published a Pew study that concluded that half of Americans didn’t know that 6 million Jews were murdered in the holocaust and this month published that nearly two third of young adults in America didn’t know that 6 million Jews died, and that “23% said they believed the Holocaust was a myth, had been exaggerated or they weren’t sure.”

Watching Harley Quinn was a wild ride. After the first episode, I fired out excited tweets that my favorite fandom was now joined by a series that understands every facet of canon and uses it to dunk on the characters. Halfway through my ecstatic thread, I looked up to see Cobblepot with his bag of money and tried to convince myself this was average stereotyping I’d become used to, no different than Mort Goldman in Family Guy. Then we met the Borgmans. Then the Borgmans were loading bodies into ovens. I stopped the show and ran back to my phone and just stared at it with tears streaming down my face. The pain I was feeling wasn't because of an ownership I felt for the character, or some other entitled fan nonsense, but because of the tropes I saw myself represented by in what was meant to be a progressive space. Who could I complain to? Who could I tell how I was feeling? As a Jewish person, I felt disentitled to my own pain. Progressive shows like Harley Quinn are the reason why.

After Donald Trump’s inauguration in 2017, one of the largest protests took place; The Women’s March. The march released their official platform with a call to bring together, “people of all genders, ages, races, cultures, political affiliations and backgrounds in our nation’s capital.” The march brought together politicians, celebrities, progressive organizations and garnered international support. But the leaders were anti-Semites. In 2018, one of the organizers was criticized for attending an event hosted by notable anti-Semite, Louis Farrakhan. Afterwards, multiple allegations of anti-Semitism surfaced. Three of the founding board members stepped down but retain the ability to rejoin the board, and the remaining founder has refused to condemn Farrakhan’s ideologies.

In August of the same year, a “Unite the Right” rally took place in Charlottesville, Virginia. Marchers shouted the Nazi chants “Jews will not replace us,” and “blood and soil.” David Duke and Richard Spencer targeted Jews in their speeches, and poked fun at the city’s Jewish mayor. Conversations about the protest widely called them “white supremacists,” and Jews were largely erased from the conversation about a gathering that directly targeted them.

In June of 2019, the Dyke March returned to Washington and introduced a ban on the Star of David, a symbol of both Judaism and the Israeli flag. Jewish would-be march attendees wrote about how this made them feel unsafe and unwelcome in a space that purported to be progressive and that appreciated intersecting identities.

June of this year, Ice Cube posted a string of anti-Semitic tweets. Shortly after, NFL player DeSean Jackson posted anti-Semitic tweets including a quote falsely attributed to Adolph Hitler. In July of this year, Nick Cannon came under fire for anti-Semitic comments made on his podcast, Cannon's Class. This sudden insurgence of anti-Semitic tweets was met with deafening silence. Those who flooded twitter to call out racism were suddenly defending Cannon for speaking truth to power. Many had nothing to say or didn’t hear about it. After Cannon’s non-apology, he tweeted that he was being called a sell-out by his community for apologizing.

Progressive spaces have not done enough to welcome Jewish people. As a religion and an ethno-religion, Jewish people are not a monolith, but are people with intersecting identities. Being left out of progressive spaces is painful, and something Harley Quinn threw right at us. The most progressive version of this beloved fandom treated Jewish people as fair game and would-be targets of unforgivable jokes. Due to our exclusion from progressive spaces, many of us felt unjustified or unsure of ourselves when criticizing a feminist television show because of it.

The willingness to “poke fun” at Jewish people in a progressive show is indicative of a problematic trend to erase Jews from the larger progressive narrative. To dismiss anti-Semitic jokes as fair game is to suggest we’re not worthy of protection by progressives.

None of this is to suggest that the team at DC Comics or at HBO Max intentionally released the Season 3 news on Rosh Hashanah as a jab at Jews. Instead, it feels like they haven't considered us at all.