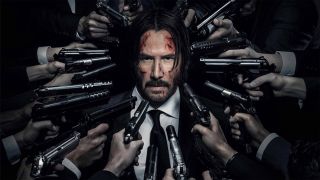 Though he’s now everyone’s favorite leading man, bordering on meme status as the world’s nicest guy, Keanu Reeves’ acting chops weren’t always lauded by mainstream audiences. They came for his dry line delivery, they came for his less than perfect British accents, but Reeves rarely, if ever, disappointed in his film selections, and his renaissance was long overdue. The young Canadian hockey player type started as a skating host on local TV stations, then dipped his toes into stage acting before being flung into action hero roles for which he’s now most known. A film fan top to bottom, he’s learned everything he can and seems truly elated by the prospect of playing with new types of filmmaking, something that’s left him with a varied and illustrious career. A face you come across while flipping channels or slapped on the thumbnail of a streaming service recommended list, Keanu Reeves usually means you’re in for a good watch.

So pop quiz, hot shot, which of his films are the best? With a filmography like his, it’s tough to choose. As Keanu Reeves gears up to go back to his teen icon ways for Bill & Ted Face the Music, here’s a look at his best films so far.

Great science fiction has a way of becoming a part of cultural iconography, and The Matrix is nothing if not an example of that. Doing what good science fiction does, taking philosophy and dressing it up in fantastical and futuristic clothing, The Matrix brought everything to propel itself into the zeitgeist. With the Wachowski’s at the helm, the film is not only a blast to watch, but it continues to be dissected for its symbolism on metaphysics, capitalism, technology and trans identity. At the front of the film is Reeves’ Neo, an every-man with a hacking hobby, that jumps from being our relatable bored office drone into a savior of the human race that knows Kung Fu. Neo is our white rabbit hopping through this world that the Wachowski’s created for us, one that tells us something new with each watch. Come for one of the world’s greatest action scenes, stay for the deep thoughts and bent spoons.

Many of our favorite action stars have also played lawyers, and though Reeves’ has done it more than once, it was never better than in The Devil’s Advocate. Slinking his way into every law student’s favorite quotes with “I’m a lawyer, I win, that’s my job, that’s what I do,” Reeves’ character is one of the more fun and surreal takes on the young lawyer we’ve seen in so many movies. Supported by Al Pacino as one of the best iterations of the devil himself, a movie that might have started as wordplay inspiring a title came together to be a gothic tale of greed and corruption.

Few know the pre-Hollywood Keanu that existed as a CBC correspondent on local TV, but if he’s ever been seen, it’s in the Bill & Ted franchise. As Ted Logan, Reeves plays the kind and kinda dumb guy whose invisible smarts save the world (along with his buddy, Bill, of course. And Socrates). Peppered with comedy greats like George Carlin, the Bill & Ted series is a flawless intersection of science fiction, historical nerdisms, and that late 80’s- early 90’s brand of knucklehead humor that’s still treasured. With the newest series installment on its way, this one is absolutely worth revisiting and the probably stands as the intro to the Pauly Shore comedy era that followed.

Before he dove headfirst into the theater, Keanu Reeves was a good old Ontario hockey boy, playing goalie for De La Salle College in Toronto. He decided to pursue acting around age 15, so it made sense for him to combine his skills for this hockey flick. Before working together on Point Break, Reeves and Swayze starred as hockey players alongside Rob Lowe as the leading man in this sports film giant. This has Reeves doing what’s comfortable, being a Canadian hockey player, and he, of course, nails it. Maybe not the most popular hockey movie, and not even the most popular Keanu Reeves sports movie, this one is worth revisiting for the film fans who live for the sound of skates scraping up ice and the suggested scent of locker room sweat and barns.

Barrelling towards its 30th anniversary, Point Break earns its spot as one of the best action movies of all time. Being the proto-The Fast and the Furious, this flick follows Reeves’ Johnny Utah as an undercover cop who gets in too deep. Director, Kathryn Bigelow, is an absolute beast and shot some incredible action with Keanu to get tight on his face while he rolls down concrete walls and to capture him running full speed, in real time, in one of the greatest chase scenes in film history. The entire cast is incredible, specifically Patrick Swayze whose charm is imperative for selling the sympathetic villain who makes Utah question his moral code.

Keanu Reeves plays a cop named Johnny Utah who surfs with a dude named Bodhi after robbing banks in ex presidents masks, what else do you want? Little hand says it’s time to rock and roll.

If you come for Reeves’ line delivery, you probably never witnessed the art form that was his delivery of “it was full of cans” in Speed. Often credited as the movie that pushed Reeves into action and doing his own stunts [gestures to Point Break], Speed sees Reeves pulling off some incredible stunts alongside Sandra Bullock as they barrel through LA on a bus.

Endlessly quotable and one that pops into everyone’s head any time an elevator hiccups, this action giant has its place for a reason. This one substantially takes place in one small location so the details matter, and Reeves and Bullock’s nuanced performances paired with the subtleties of the believable LA bus riders are what makes this one as memorable and timeless as it is, even if the giant cell phones were immediately dated.

Maybe not on the list of everyone’s favorite Reeves performances, this one is important to throw into the mix when considering the variance of the actor’s career. His first love was Shakespearean theater, something he often fought against giving up as he dipped his toes into the water of action stardom.

In this more modern adaptation of the Shakespearean classic, Reeves shines as Don John. The film gave us a shirtless Keanu Reeves as a “plain dealing villain,” spitting out poetry. I dare you to skip it.

Maybe a movie about a bunch of scabs in the time of an NFL strike doesn’t hit so well now, but this football classic is a household name for a reason. Loosely based on, or maybe just coincidentally similar to, the 1987 NFL strike, The Replacements centers on a fictional football team that brings on replacement players leading to unexpected success. Reeves stars as Shane Falco, which is one of the better written fake football names, honestly, a shamed football player looking to polish off his reputation after a Ray Finkle level failure at the Sugarbowl. It’s charming and funny and it’s nice to see Reeves playing an athlete, a natural move for him that he didn’t harness much throughout his long career. Often touted as a cliché sports film, that’s all you’ll want from it. That, and it has a dance scene.

Now that he’s writing a new comic book, BRZRKR, it’s a great time to reflect on the time he took on a comic book role in Constantine. As John Constantine, Reeves takes on the supernatural and has another run in with Satan that varies from the interaction in The Devil’s Advocate. This surreal supernatural thriller is a blast and one of the more fun adaptations of Christian religious lore. The cast is stellar beyond words (Rachel Weisz and Djimon Hounsou? You have our attention) and they bring to life a dark comic book story in a way rarely seen since. It’s scary and fun like Dogma if it took a trip through the River Styx and its made that much better by having Reeves at the forefront, almost never removing his tie.

It’s impossible to discuss Reeves’ career without mentioning the film that launched him back into the hearts of all. Many will pretend they always loved the great Keanu Reeves, but despite his incredible filmography, it wasn’t until John Wick that he became universally beloved enough to appear as a parody of himself in Always be my Maybe.

Sure, maybe he doesn’t exactly fit the bill of a Russian folklore witch, but Reeves as the Baba Yaga who keeps villains up at night is, plainly, bad ass. In the age of the cinematic universe, it’s a breath of fresh air when movies go back to basics, and almost none have done it as flawlessly as John Wick. It’s as simple as sad returned assassin avenging his dog, which is all we need to support some of the best action sequences on screen in years. Reeves’ entire career built up to him playing a warm and likeable assassin while being able to deliver unbelievable teeth rattling combat scenes. This culmination of every skill he’s honed over his career is absolutely what’s up, and this is an impressive feat for anyone, including someone as incredible as the great Keanu Reeves.