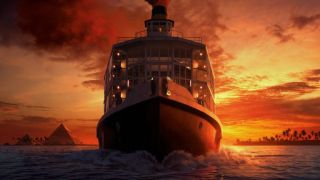 "Death on the Nile" is scheduled to open in theaters on Oct. 23, 2020. (Image credit: Twentieth Century Studios)

Hercule Poirot is back. And murder has yet again found its way to the Belgian detective, this time interrupting his vacation in Egypt. Death on the Nile — the follow-up to 2017's Murder on the Orient Express — now has its first trailer ahead of its Oct. 23 release in theaters.

"Have you ever loved so much," asks Poirot, again portrayed by Kenneth Branagh, "been so possessed by jealousy — that you might kill?"

Given that Death on the Nile also stars the likes of Gal Gadot, Rose Leslie and Armie Hammer, we can see where he's going.

Like last time, the scene is simultaneously contained to a steamboat while also grand in scale, with no less than the Great Pyramids playing a big part. (What other kind of part could they play?)

Here's how the studio puts things:

Belgian sleuth Hercule Poirot’s Egyptian vacation aboard a glamorous river steamer turns into a terrifying search for a murderer when a picture-perfect couple’s idyllic honeymoon is tragically cut short. Set against an epic landscape of sweeping desert vistas and the majestic Giza pyramids, Death on the Nile features a cosmopolitan group of impeccably dressed travelers, and enough wicked twists and turns to leave audiences guessing until the final, shocking denouement.