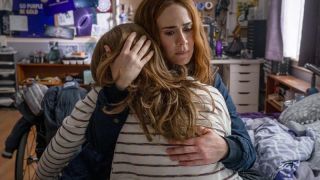 Sarah Paulson is no stranger to spooky after a decade on American Horror Story. Her newest horror role, Run has just been picked up by domestically by Hulu after a heated auction from Lionsgate.

In the film, Paulson's character Diane Sherman plays an overprotective mother to her wheelchair bound daughter Chloe (Kiera Allen). Sherman raises her daughter in complete isolation, allowing her no control over her own life. As things progress, Chloe starts to discover some dark secrets about her mother and what she's been hiding.

As a noteworthy aside, Kiera Allen is the rare wheelchair using actress portraying a wheelchair user in film.

The film was directed by Aneesh Chaganty and co-writer Sev Ohanian. Chaganty remarked on the film's new home after Hulu's purchase of the rights.
“We’re super excited audiences will get to stream Run on Hulu, a platform that’s really committed to giving the movie the same, big splash that was always intended for it. Plus, the film is about a girl who’s been quarantined at home her whole life; watching it the same way should be a fitting experience in 2020.”

Hulu is yet to announce when the film will premiere on the streaming service. Run will still release theatrically in international markets.