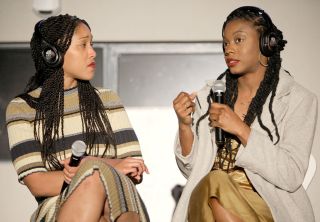 Though Disney and Marvel studios are yet to comment, Deadline is reporting that Nia DaCosta has been tapped as director for the currently untitled Captain Marvel sequel coming during Marvel's phase 5. It's said that DaCosta met with Kevin Feige over the weekend to discuss the project.

DaCosta's current film, the reboot of Candyman, has fallen victim to the release date musical chairs brought about by COVID. However, her indie film Little Woods received high praise from critics.

For those wondering what happened to Captain Marvel directors Anne Bowden and Ryan Fleck, this isn't the first time that Marvel's had a director shift mid-franchise. We've seen a similar practice take place in Thor, Iron Man, and Captain America in the past.

This will be an exciting change of pace for the Marvel franchise. Like all film studios, Marvel and Disney have struggled with getting women at the head of their projects. While they've undoubtedly had more success in their film franchises than DC Comics, the home of Superman, Batman, and Wonder Woman did put a woman behind the camera first.

DaCosta's already proven her directing prowess, and if what we've seen of Candyman so far is to believed, she's only going to continue to wow audiences. This is a smart move for Marvel, and it makes the idea of a Captain Marvel sequel that much more thrilling.