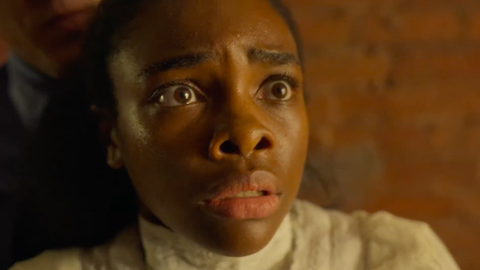 'Lovecraft Country' delivers its most terrifying - and best - episode yet.

On August 28th 1955, 14-year-old Emmett Till was murdered. A local white man, whose name isn’t worth the space in your brain, believed Till had flirted with his wife. In response to this, the man enlisted his brother to help him with his plan. The two made Till carry a 75 pound cotton gin to the Tallahatchie River, forced him to take off his clothes, beat him within an inch of his life, gouged his eyes out, shot him in the head and then threw him in the river while tied to the cotton gin with barbed wire. The murderers were tried and acquitted less than a month later on September 23rd. Sixty-five years later, Breonna Taylor’s murderers would be acquitted (or charged with endangering her white neighbors) on the same date.

This week’s Lovecraft Country begins at Emmett’s funeral. Thousands of Chicago’s Black population flooded the streets to pay respect in the sweltering heat. In the first moments of the episode, they make a point to drive home the smell while cops from the precinct that would ultimately do nothing called for them to get out of the street lest the service be shut down.

His funeral isn’t the first time we meet young Emmett. Bobo (Rhyan Hill) – Till’s nickname - makes an appearance in an earlier episode as one of Diana’s (Jada Harris) best friends. He asks the Ouija board if he’s going to have a good time on his trip down south. When it told him “no,” viewers had all but confirmed who the young man was. “Jig-A-Bobo” removes any question.

It also drives home what a bad time young Diana Freeman is having. After losing her father not a month ago, D now finds her mother missing. It’s been a week since Hippolyta’s disappearance. Though we know that she chose to return to her daughter rather than remain in her state of cosmic bliss, it’s unclear when the Freeman matriarch will be returning home. All of that on top of losing one of her best friends in such a monstrous way somehow isn’t the worst part of Diana's day, either. After Captain Lancaster’s (Mac Brandt) goons are found dead at the foot of the time machine clutching D’s comic, he makes a point to hunt down the youngest of the Freeman clan.

The absurd Captain is too wrapped up in his own hubris to realize that he’s several steps behind Christina Braithwhite (Abbey Lee) and a galaxy behind Atticus (Jonathan Majors). Rather than do what we all feared he would to a young Black girl in an alleyway, Lancaster curses her. We find out later that it’s so she’ll break into Leti’s home and steal the Orery, an object that is all but out of play at this point. To cast his curse, he spits on D’s forehead. He then leaves her terrified in the alley.

D will spend much of the rest of the episode in a kind of abject terror, and with good reason. The creatures that chase her – inspired by Topsy from “Uncle Tom’s Cabin” - smack of The Tethered ala Jordan Peele’s Us and some strange marriage of a clown (possibly as simple as a play on Topsy’s grin, or it could be an acknowledgement of the ridiculous smiles that are ever-present in the blackfaced representations of the character). In short: they’re terrifying. They stalk her throughout the episode, always lurking. Having enough of the game, a young and fierce Diana marches directly into the police station to demand Lancaster tell her what’s going on. He proposes his trade for the orery, Diana proudly tells his idiot deputy who mocked her mother’s name previously that “Hippolyta” is Greek, spits on Lancaster’s tie, offers a defiant “fuck you, pig,” and marches back out again. She will make her final stand against the creatures, but an interruption from Montrose (Michael Kenneth Williams) allows one of them to tear into her arm.

The below speech from Naomi Wilder plays as Diana takes her last stand.

That part of Diana’s story will continue in next week’s episode. In the meantime, let’s talk about the complicated and rage-filled Montrose Freeman and, by proxy, his complicated and rage-filled son. As you may recall from last week, Tic found himself sucked into the portal as well. We discover that he was hurled into the future. He knows Leti’s pregnant, that Christina will sacrifice him on the Autumnal Equinox, and that his son (named George) will write “Lovecraft Country.” In his return, Tic finds himself more desperate than ever. In response he turns to Christina (who, again, is definitely going to sacrifice him in a week) to ask that she teach him a protection spell. In return, he gives her the key to the very broken time machine.

Tic’s day is complicated further when he returns home to find Ji-Ah (Jamie Chung) at his kitchen table, along with a very unhappy Leti Lewis (Jurnee Smollett). There are some angry words, Ji-Ah roasts Atticus to hell, Leti points out that Ji-Ah is in America because she loves Tic and remains worried about his death, and then there’s a lot of yelling between Leti and Tic that drives the angry and lost young man to his father’s doorstep.

Tic’s first question to his father is simple: “did you cheat on my mama?” he asks. The answer, thankfully, is no. Given Tic’s reaction to his father’s sexuality, there was a lot of concern about a homophobic storyline surrounding the series’ lead protagonist. Thankfully, those who theorized that Tic’s wrath was rooted in defense of his family were correct. With this knowledge, Tic comes clean about everything. With Montrose in the know about Leti’s pregnancy, the future, and “Lovecraft Country,” the two go about making Tic invulnerable. It’s worth mentioning that doing so could have taken Montrose’s life. It’s a sweet moment between two complex characters that ultimately appears to have no effect.

That is, until Tic finds himself looking down the barrel of a gun.

When Lancaster realizes he won’t be getting what he needs from young Diana, he takes a small army to Leti’s home. Lancaster tries to barge in, is halted by the protection spell on the door, and then decides that the best course of action is to simply shoot it all down. Leti at this point is invulnerable – she turned to Christina earlier in the episode in exchange for Tic’s invulnerability. Christina counters, Leti ultimately accepts – but Tic doesn’t know that. As far as he’s aware, he’s stumbled upon the murder of the love of his life and his unborn child.

The deputies see him, turn their guns on him, and for a moment it appears that Tic’s going to see the inside of a pine box earlier than Christina would have preferred. Leti races out to defend him just in time to see a Shoggoth burst from the tar to tear through the entire police department for attempting to murder his charge. It appears Montrose’s spell worked after all.

As you can see from all of those paragraphs, a lot happened in “Jig-A-Bobo.” Showrunner Misha Green’s directorial debut was an all-around stunner. It’s beautiful, emotional, and downright terrifying. Ruby’s journey alone could act as several thousand words worth of essay as she grows to realize that she doesn’t want to be white. She wants to create a space for herself in a white world. She hates herself for turning to Christina and her tricks during Emmett’s funeral, and hates that the white people around her make her not want to be Black in the moment. But by the time she visits her sister for their confessional, she knows that she will use Christina to get what she wants.

Ruby also has the appropriate reaction to a vibrant, free-thinking, empowered woman with no interest in having a baby being strapped with an unwanted pregnancy in a show that has, so far, done so right by her. Mothers are strong and fierce and capable women, the annoyance at the story development has nothing to do with the power of the women who choose motherhood. The frustration is that everything we know about Leti signals that this is not the direction she would have chosen for herself. This plot point, in a show that has so far fought so hard for the autonomy of its female characters, is irritating at best.

That singular annoyance aside, “Jig-A-Bobo” is Lovecraft Country’s most impressive episode yet. The marriage between the terrors of reality and the horror the fantastic is seamless while Diana and Ruby’s stalwart defiance against their oppressors will make viewers want to cheer. After two stand-alone episodes back-to-back, it’s nice to see the series back on track as we continue to chug along toward the season finale.