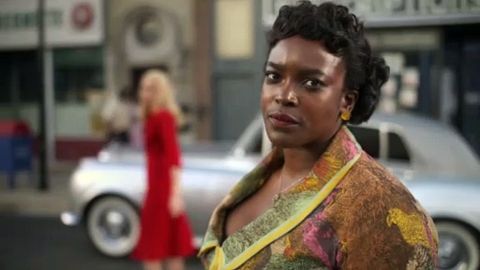 A noteworthy penultimate that will leave you in tears.

There are some episodes that are meant to be devastating. “Rewind 1921” is one such episode, and it rises to the challenge in ways that some viewers may not be ready for. (But should sit through anyway.) It’s the kind of hard watch that people like myself - a white woman - may want to look away from, but have an obligation to learn about historical pain that wasn’t taught in many of our schools.

The trip back in time occurs in an effort to save Dee’s (Jada Harris) life. The family begrudgingly enlists the help of Christina Braithwhite (Abbey Lee), but even her magic isn’t enough to stop the curse in its entirety. All she can do is slow the spell, and even that comes at a price. In exchange for Tic (Jonathan Majors) agreeing to come to her willingly on the Autumnal Equinox, the White Witch does as she promised. Dee’s curse is pushed back to its starting point, but all it does is buy them time.

They’re out of options by the time Hippolyta (Aunjanue Ellis) makes her triumphant return. Immediately, she packs dee into Woody and prepares for their journey. At the protest of Tic, Montrose (Michael Kenneth Williams) and Leti (Jurnee Smollett), Hippolyta catches them up on her journey and tells them to get in the goddamn car. A quick drive and some rewiring has the three back in time to gather the Book of Names in a snap.

The Tulsa Race Massacre is one of many stains on American history that will never come clean. “Rewind 1921” adequately illustrates that pain in a way that will connect with the viewer not just because of the tragedies we’re watching unfold on screen, but because of the connections the narrative pushes in our laps. It would have hurt to watch the violence unfold, but not in a lasting kind of way. Brains are great at disassociation. To get something to stick, you have to give viewers something connected to a character they love (a task that this week’s episode completes masterfully). We watch Montrose lose his first love, and stare on in terror as the gang of white murderers descend on him and his family. In tandem, Leti is forced to reveal to Tic’s great grandmother why she’s in their home after they protected her from her would-be killers. Without Hattie’s help, they have no hope in saving Dee or potentially protecting Atticus. And so, Tic’s ancestor hands over the book. In return, Leti holds her hand as she burns to death as her family home collapses around her.

There aren’t suitable words to truly describe the moment Leti and Tic’s great grandmother share. It hurts to watch Montrose lose the man he loved, and to see the terror on the faces of the children as they believe they’re about to be beaten to death. But you get the catharsis of Tic rushing in with a baseball bat and beating their tormenters to shit to help quell that pain. Leti gets her prize, but there is no relief to be had as you watch the matriarch of your family burn while you remain invulnerable to the flames. That scene only offers pure, unfiltered pain.

As Hippolyta struggles to keep the portal open, Montrose looks on as Tulsa burns. He recites names of the victims, listing off the names of people who could have changed the world if they hadn’t been slaughtered by bigots. As he does, Leti Lewis slowly marches down the middle of Main Street clutching her prize as bombs explode around her and fire engulfs her body once more. It’s one hell of a moment.

With that, they’re able to save Dee form the nightmare fuel that was Topsy and Bopsy. Now, all they have to do is get their family through the Equinox. The pieces on the chess board currently fall something like this: Leti is invulnerable, with Tic having a certain level of protection in his own right, Montrose teeters somewhere on Tic’s good side for the moment, Hippolyta has saved her daughter, Christina thinks she’s going to sacrifice Tic without a hitch, and Ruby (Wunmi Mosaku) – who knows Christina plans to kill the father of her sister’s child - wants a new white body (someone with red hair, if you please).

In addition to all of that, two major bombs were dropped on characters this week. Tic finds out that George (Courtney B. Vance) may have been his father, and Leti learns that Tic skipped to the future and knows she’s pregnant. Leti, who mostly just seems done with everyone’s nonsense, handles the news pretty evenly. Tic, on the other hand, tells Montrose of all the times he’d wished George was his father instead of him, and then gets cross when he drinks.

The Montrose and Tic relationship is a complex one. While the several-episode ambiguity of whether or not Tic was a homophobe or not wasn’t Lovecraft Country’s best move, this episode is a good addition to their story. There’s nothing that can erase what Montrose Freeman did to his son, just as there’s nothing that can erase what his father did to him. All the same, it feels as if there’s at least some sort of understanding between the last remaining Freeman men for the time being.

That understanding will need to last them for the remainder of the series, because the finale hits next week. The Equinox is here, and Christina’s ready to move forward with her plan. Thing is, she never counted on them getting the full book. Not to mention that if the stinger for next week’s episode is to be believed, Tic has something up his sleeve as well. “Rewind 1921” really nails it as a penultimate episode, but the season finale still has a lot of ground to cover. It feels as if we still don’t know exactly what Ruby is up to, and Ji-Ah (Jamie Chung) must have more of a part to play before it’s all said and done. Guess we’ll find out soon!